RUSH: John Podesta, whose emails were made public in the WikiLeaks dump, ran Hillary’s campaign, was on a website yesterday, and they released an interview by Bloomberg Politics co-managing editor John Heilemann they had with Podesta. We have a little clip of this thing. It’s kind of funny in a way. During a discussion about James Comey, the FBI director, during a discussion of his impact on the election, Heilemann and Podesta had the following back-and-forth.

HEILEMANN: You have a theory, the case — 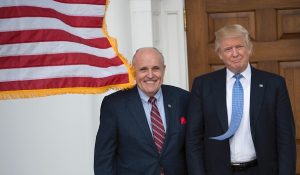 RUSH: Wow. So there’s Podesta. So there’s a deep state that stuck it to Hillary. Somebody in the FBI didn’t want her to win. You know what they’re saying. They’re saying that Rudy, Rudy Giuliani, former U.S. attorney, tight with some FBI types in New York, they’re saying that Rudy had the connections to make all this Comey stuff happen and that the FBI is just a cover-your-ass organization, not doing anything serious anymore. They just wanted her to lose and they didn’t understand the alternative. Meaning they didn’t know how bad it would be with Trump, they just hated her, once again, betraying the Podesta mind-set.