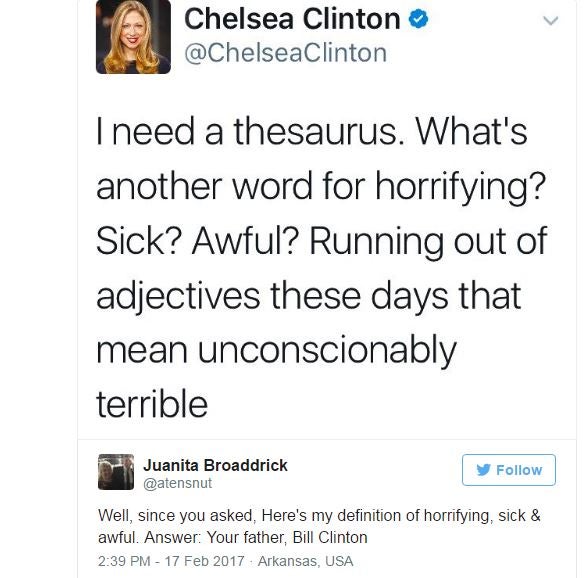 RUSH: Hey, did you see that tweet from Chelsea Clinton over the weekend? Aw, you’re gonna love this. Chelsea Clinton tweeted out: “I need a thesaurus. What’s another word for horrifying? Sick? Awful? Running out of adjectives these days that mean unconscionably terrible.”

And look at this. This is from Reuters. I know you’re getting tired of me talking about this. I beg you not to. I’ll try to ride herd on it, too. “U.S. Inquiries Into Russian Election Hacking Include Three FBI Investigations.” Three. Not one of them have produced — Why do we even know they’re happening? We still haven’t been told there’s an official investigation of the Clinton Foundation, for crying out loud. Why do we know this? Three different investigations, FBI investigations into Russian hacking the election. And Mook from the Clinton campaign today saying, “We know the Russians are the reason Hillary lost,” or whatever.