Do Not Worry About Donald Trump

RUSH: Rasmussen has a presidential popularity poll out, approval poll. Trump is at 55% in this poll. The only other poll out there that I have seen of his presidential approval number, was, what? Gallup? 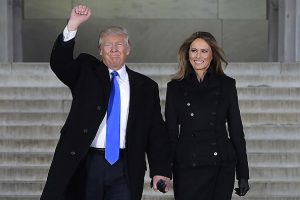 It had Trump at 40%, and Rasmussen has Trump at 55%. It’s a poll of likely U.S. voters. Trump at 55% approval, 45% disapproval. “The latest figures include 38% who strongly approve of the way Trump is performing and 36% who strongly disapprove.” Trump is going to Melbourne, Florida, on Saturday. He’s gonna have a rally. And I suggested that he do this. I… (interruption) No, no. I don’t know… (interruption) No, no. I’m just telling you: I suggested he do this. You’ve heard me say it. Trump’s support base, his voters are all that he has.

He needs this stuff. He’s got to create scenarios where there are photos and pictures of thousands and thousands of people in love with Trump and going nuts to counter some of the phony, fake news that the Drive-Bys are putting out. So I think… Did I see this rally is…? It sold out. Whatever that means, the tickets are free. But it sold out. It’s at five p.m. on Saturday up in Melbourne. You ever been to Melbourne, Mr. Snerdley? (interruption) Yeah, it’s right up the road there. In fact, if you don’t like the Miami weather radar, tune into the Melbourne weather radar. We are covered by both sweeps.

So that’ll go probably an hour, hour and a half, and then Trump will come back here. So if you need to get around here, do it between five and 6:30 on Saturday. And Presidents Day is Monday, right? (snorts) Wendy knew that before anybody. I’m seriously thinking… You know, I get screwed on these Mondays. Nobody ever tells me about ’em and I show up here and I’m seriously thinking… This is intense here. I mean, this is… I was telling somebody the other day… Oh, I got an email yesterday from a friend who said, “Good job, great show.”

I said, “You know, I tell you; I’ll be honest with you. I don’t remember it being more intense. I’m sure it has, I just don’t recall it. I don’t remember the number of hours required just to stay even with the flow of news, to stay prepped and so forth. It genuinely…” It really is. I am sure back in the early Clinton days it might have been like this, the early Obama days, Gulf War I and Gulf War II, but I don’t know. It just seems incredibly busy. There’s no rest, there’s no break, there’s no… You have to… I have to purposely carve out some time and just forget everything.

But no matter what I’m doing, something is gonna happen.

The phone’s gonna blare or something’s gonna happen, like that alert I got last night of Wall Street Journal, and then the New York Times had one the night before. Both of them ending up to be really exaggerated. Cybercast News Service: “60% of Refugee Arrivals Since Judge Halted Trump’s Order Come From 5 Terror-Prone Countries” that Trump wanted to temporarily limit those people getting into the country. Sixty percent of the refugees admitted to the U.S. since Judge Robart out in Seattle put a stay on the executive order, originate from five of the seven countries identified by Trump — and Obama, by the way — as the most risky.

Trump had a series of tweets today. I wouldn’t worry about Trump. I know a lot of people are putting themselves in Trump’s shoes. You watch the news, you see the assaults, you see the Drive-Bys. You see it, you expose yourself to it, you know what’s going on. You wonder, “How is the guy holding up?” I mean, you know how you feel, and it isn’t even about you. You know how much pressure you feel and it isn’t even about you. It’s about Trump. And everything that I have been able to amass, witness, put together, says he’s fine. Not that he’s unaware, don’t misunderstand. He’s not living in a bubble.

It’s just that he’s committed to his agenda and all of this stuff is noise, and the media is not the number one thing in his world in terms of shaping his opinions on things or his agenda or his daily attitude.

RUSH: So the AP had a story today that Trump is overwhelmed by all these crises. No, he’s not. Trump had a very casual meeting with 10 or 12 members of Congress today talking about the agenda. He was joking. He was lighthearted. It was excellent. It was off the cuff, informal. It was funny and it was charming. He’s not stressed over all this, or what would they say, overwhelmed.