RUSH: What’s the solution to this for Trump? What’s to be done? Have you seen the story, by the way, that the IRS is going to stop examining your answers to questions on health care going forward? Yeah. The IRS is not gonna… You know why? Donald Trump made that happen with an executive order affecting Obamacare. The IRS said, “Okay, well, we don’t have to ask you these questions, whether you’ve got insurance anymore. We’re not gonna do that anymore. We’re not gonna ask.” 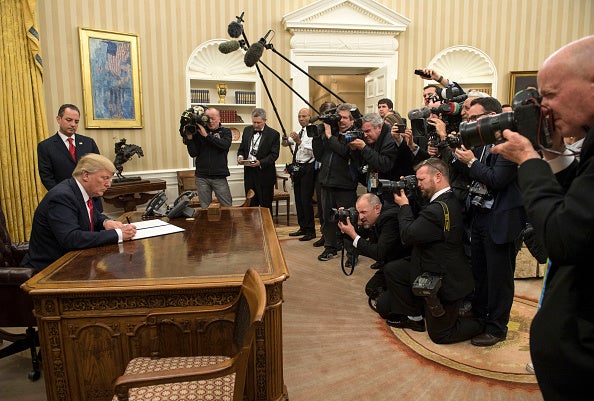 That’s because of an executive order by Donald Trump. Donald Trump success stories are on the domestic side, and there’s some success stories here with international policy, too. I mean, every foreign leader that comes to visit Trump loves him, sings his praises, has the greatest time with him, feels a renewed respect from the United States of America. There was a meeting of CEOs and businesspeople today, and they came out of the meeting with Trump just loving what had happened.

It’s the first time they’d ever been invited to the White House. They’re small-business people and so forth. So the stuff that’s actually happening — the things that Trump’s doing — it’s a home run with the people who are affected by it. But you’re not hearing about it very much. We’ll take care of that today, too, but therein lies the answer, the solution for Trump on this stuff, and he’d better do it quickly, too. It’s the only way he’s gonna keep the Republicans and Congress on his side.

RUSH: I saw Snerdley make a mad dash to the computer when I told you the IRS was going to stop requiring people to indicate whether they maintained health coverage or not. Don’t bother looking it up. It’s right here. You can find it at the Drudge Report. It’s at Reason.com. “Major Blow to Obamacare Mandate: IRS Won’t Reject Tax Returns That Don’t Answer Health Insurance Question.” You have to answer whether you have health insurance or not, and, if you don’t, you’re subject to a fine or some other penalty. They’re gonna stop asking the question.

They’re gonna… Well, they’re gonna stop requiring you to answer it, and the reason for this is that Donald Trump has already made a move toward the unraveling of Obamacare with his executive order instructing agencies to provide relief from Obamacare. The Internal Revenue Service has decided that they’re going to follow the executive order. They’re gonna take a more lax approach to the coverage requirement, and you’re not going to suffer a penalty if you don’t have Obamacare. This is a huge blow to the mandate. It’s not full fledged. It doesn’t require… It isn’t legislative rollback, but it’s a big move!

RUSH: Do we need any more evidence Obamacare is an historic disaster? Humana has now announced they’re gonna drop out of Obamacare at the end of this year. It’s imploding right before our eyes. Finish it off, President Trump. Finish it off. Get going.