RUSH: “U.N. Official Reveals Real Reason Behind Warming Scare.” You know, this is from the U.K. Daily Mail. They’ve had two stories in the last five days about how NOAA — the National Oceanic and Atmospheric Administration — the number one climate change federal agency had literally made up some data. A whistleblower in the agency finally got fed up with what he was seeing and offered conclusive proof that how NOAA has been fabricating data, and they released a bunch of data right before the last Paris accords meeting.

One of the premises of the global warming crowd is that there has been a “pause.” You know, you’ve heard there hasn’t been any warning in the last, now, 17 years. There hasn’t been any warming. And the computer models all said the warming would continue. So the pro-global warming crowd’s been very, very distraught, and they’ve been looking for excuses and reasons to tell people why the warming was halted that would not discredit their premise. And the way they did it was to say, “Guess what? We’ve found additional information to show that the warming has actually continued; that everybody who thinks the warming hasn’t continued is wrong!”

And the whistleblower said (paraphrased), “They just made it up! They literally just made up the data, and they timed its release right before the Paris accords.” Well, what’s happened next? Investor’s Business Daily: “Economic Systems: The alarmists keep telling us their concern about global warming is all about man’s stewardship of the environment.” They keep telling us they’re trying to save the planet. They’re trying to make sure ecosystems survive so humans can survive beyond 50 years from now. 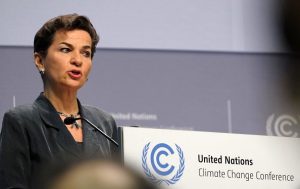 “At a news conference last week in Brussels, Christiana Figueres, executive secretary of U.N.’s Framework Convention on Climate Change, admitted that the goal of environmental activists is not to save the world from ecological calamity but to destroy capitalism.” A climate change activist, in Brussels, at a press conference, actually admitted it! “‘This is the first time in the history of mankind that we are setting ourselves the task of intentionally, within a defined period of time, to change the economic development model that has been reigning for at least 150 years, since the Industrial Revolution,’ she said.

“‘This is probably the most difficult task we have ever given ourselves, which is to intentionally transform the economic development model for the first time in human history.'” She’s talking about capitalism. She admitted the task that had not is overthrowing and transforming capitalism. That is the only economic model that’s worked in the last 150 years, and she has admitted it. I’ve only seen this in Investor’s Business Daily. I have not seen this story anywhere else in the Drive-By Media, and we won’t see it anywhere else.

And, therefore, a bunch of Millennial tech blogger types and other young Millennial college students and others will never see, will never know that one of the United Nations’ leading climate activists admitted that the objective is to overthrow capitalism.