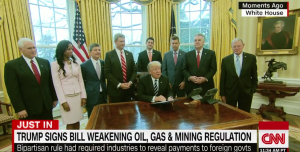 RUSH:  Hey, in the midst of all of this, Trump just signed his first bill today, first piece of legislation.  You know what it does?  I was watching CNN.  They’re just livid.  CNN is reporting that Trump’s bill that he signed weakens oil and gas and mining regulations.  And you should have seen them when they announced this. They’re just shaking their heads, “Oh, my God.”  And what they’re shaking their heads about is he won’t stop.  We can’t make him stop!  We thought we had him paralyzed with Flynn, he just keeps doing it.

And that’s what’s gonna continue to happen.  They are not going to stop him.  They’re gonna be in the dust.  I don’t care what the media thinks they’ve got.