RUSH: That singer that showed up in the Make America Great gown at the Grammys, who I pointed out what happened to her yesterday. Her record, her album was at number 500-some-odd thousand on Amazon. It went to number three. It was number one on the new and upcoming. She just blew it away! She’s outselling Beyonce and Jay Z and whoever the heck else. And it’s a great, great sign. That’s all the Trump people out there waiting. Just give them a chance to demonstrate that they’re there, and they will do it in the face of all this left-wing protest stuff, and they did it big time — and so now she’s getting death threats. 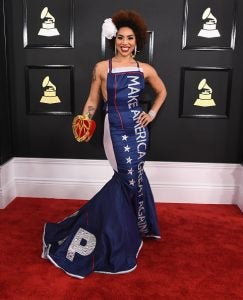 She is now getting death threats over her dress. She’s being sent tweets demanding that she die. “While the 25-year-old multiracial singer intended to send a message of ‘tolerance and love,’ bile-spewing leftists on social media called her…” Well, I can’t repeat the words. They called her a blah, blah, blah, “a ‘disgrace,’ and a ‘dumb Uncle Tom.’ “F— Donald Trump and f— that Joy Villa [blank] [blank] b[i-itch].'” That’s what they’re tweeting out there.

The left has an idea that on… Do you know what the ides of March is? It’s March 15th. This is from one of the distinguished left-wing websites. There’s an ongoing effort now for everybody in the world to send Donald Trump a postcard on March 15th telling him that he’s scum, telling him that he just stinks and that he should quit. And the left-wing website thinks that they can actually make a dent in Trump’s psyche if they can generate millions and millions of postcards sent to him from around the world.