Is the Kremlin Afraid of Trump?

RUSH: Now, I mentioned at the beginning of the program a piece that I read at a publication called Foreign Policy. It’s a magazine. It’s owned by the Washington Post, and it’s an effort to compete with another magazine called Foreign Affairs. Foreign Affairs is a very august publication of the Council on Foreign Relations — which, of course, has a symbiotic relationship with the Trilateral Commission. Now, this is the Washington Post attempt to get in on the business of elite establishment types reading about foreign policy.

Now, these people have nothing to do with foreign policy. Foreign policy is set by the president of the United States and his team. But there is this thing called the Council on Foreign Relations, and it’s made up of, well, elites from media, from academia, from corporate America. And they sit as a shadow doing what they can to influence American foreign policy — or undermine it, if necessary, or promote it, if necessary. But they have no official ties unless one of them happens to be chosen by the president and join his administration.

Foreign Policy magazine is an effort to get in on that august, elite business.

They have a piece that had actually something to the effect that Moscow (i.e., Vladimir Putin) all of a sudden has become very, very frightened by Donald Trump. Now, this cuts against the grain. The narrative out of the Democrat Party is that Trump and Putin are brothers in crime or politics or whatever. As you know, the Democrat Party thinks the Russians cost them the election, and they also think that Donald Trump is just buddy-buddy with Putin. So they think that Putin worked with others to hack the Democrats to give the White House to Trump. But now along comes Foreign Policy magazine asserting that the Kremlin is very, very worried now because they have become totally bamboozled and surprised by Trump.

“In 2016, a senior Russian official explained to a group of visiting foreigners why the government had decided not to celebrate the upcoming 100th anniversary of the Bolshevik Revolution. Yes, it was a turning point in Russian history, he argued, and, yes, President Vladimir Putin sees today’s Russia as a successor to both the tsars and the Bolsheviks. But celebrating a revolution would send the wrong message to society.”

They don’t want the society thinking about revolution. Revolutions take place against governments, and Putin doesn’t want a revolution out there. So they decided in Russia to ignore the one-hundredth anniversary the Bolsheviks, which is a big deal! It would be like us ignoring an anniversary of the Civil War or anything about it for fear of inciting a similar revolution here. 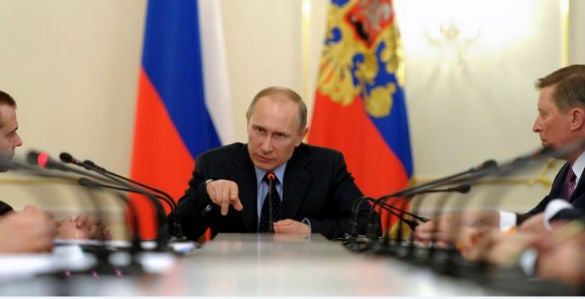 “The last thing the Russian government expected was that 2017 would bring it face to face not with a revolution of the past but with a revolution of the present — the radical regime change taking place in the United States as a result of the electoral victory of Donald Trump. It is Trump’s electoral revolution that has captured the imagination, and fanned the fears, of Russian elites today. The search for a key to Trump’s mind-boggling and miscellaneous gusher of policy directives has tended to focus on his –” Get this paragraph. I should have set this up. This is an analysis of where the Russians are and how they analyze Trump.

“The search for a key to Trump’s mind-boggling and miscellaneous gusher of policy directives has tended to focus on his disturbingly erratic, vindictive, simplistic, narcissistic, insecure, and occasionally delusional personality. … What most observers have been late to recognize is the extent to which, behind his mask as a showman, Trump views himself as a revolutionary insurgent with a mission to dismantle America’s ‘old regime.'”

This story purports to say that the Russian elite is shocked that that’s who Trump really is. They thought Trump was just this showman, entertainer, performer, narcissistic, sort of unhinged but manageable. They have become, according to this, stunned to learn that Trump means it, that Trump is serious about dismantling America’s old guard.

“Trump’s tactics certainly belong to the classic revolutionary playbook. His shock-and-awe style of executive action is designed to rattle Congress, catch his opponents unprepared, and incite his base to wage war on the establishment. The extreme polarization he deliberately foments allows him to fend off an opportunistic alliance of the Republican elite with the Democratic Party in defense of the constitutional system, ensuring that protests will be largely impotent.”

Let me translate this for you. What they have concluded, according to this, in Moscow is that Trump’s purposeful divisionaryism, his purposeful polarization, the fact that he’s purposefully divisive means that he is deliberately trying to prevent the Republicans from forming an alliance with the Democrats to defend the establishment. They are shocked that Trump has been able to carve this out and is executing it.

The extreme polarization that Trump foments has allowed him to prevent the Republican elite forming an alliance with the Democrat Party, i.e., the establishment coming together to defend itself, and this is ensuring that all of the anti-Trump protests will be largely impotent because they cannot effect what their objective is. And that is to focus everybody on getting rid of Trump because Trump’s keeping everybody off guard, and Trump is making it hard for the Democrat and Republican elites to get together against it. Well, that was all before the Flynn thing happened, I should point out.

“In the words of White House strategist-in-chief Stephen Bannon, Trump is positioning himself as the global leader of an anti-global movement that is anti-elite, anti-establishment, anti-liberal, and nationalistic. ‘What we are witnessing now,’ Bannon told the Washington Post, ‘is the birth of a new political order, and the more frantic a handful of media elites become, the more powerful that new political order becomes itself.'”

So this story purports to say that all of this media-going-nuts stuff is exactly what Trump wants, is exactly what Trump and his advisers want. The more frantic a handful of media elites become, the more powerful the new Trump political order becomes. That’s what they quote Bannon as saying. The story goes on to say that what the Kremlin now fears most is that Trump may be ousted or even killed. That’s what they worry about most. Do you know why? I’ll tell you why when we come back.

RUSH: Okay. Back to the conclusion here at Foreign Policy magazine. “With Trump in the White House, moreover, Putin has lost his monopoly over geopolitical unpredictability. The Kremlin’s ability to shock the world by taking the initiative and trashing ordinary international rules and customs has allowed Russia to play an oversized international role and to punch above its weight.”

In other words, Putin’s unpredictability has allowed him to be a much bigger and more powerful world leader than he actually is. That Russia just ain’t that big a deal anymore. It anywhere near as big as deal as the Soviet Union was, but Putin’s erratic unpredictability in deciding one day to go invade here or there kept everybody on edge. But now he’s lost the monopoly on that with the arrival of Donald Trump.

“Putin now has to share the capacity to keep the world off balance with a new American president vastly more powerful than himself. More world leaders are watching anxiously to discover what Trump will do next than are worrying about what Putin will do next.”

Now, this is a Washington Post publication writing this stuff. Analyzing Russia and Trump, they’re saying that Putin now feels a distinct competition with Trump and feels like Trump is overshadowing him, Trump is out-Putining Putin. And Putin doesn’t like this, but there’s nothing he can do about it.

“Meanwhile, using anti-Americanism as an ideological crutch has become much more dubious now that the American electorate has chosen as their president a man publicly derided as ‘Putin’s puppet.’ What the Kremlin fears most today is that Trump may be ousted or even killed. His ouster, Kremlin insiders argue, is bound to unleash a virulent and bipartisan anti-Russian campaign in Washington.”

So, as a result, “Putin has become a hostage to Trump’s survival and success. This has seriously restricted Russia’s geopolitical options. The Kremlin is perfectly aware that Democrats want to use Russia to discredit and possibly impeach Trump while Republican elites want to use Russia to deflate and discipline Trump. The Russian government fears not only Trump’s downfall, of course, but also the possibility that he could opportunistically switch to a tough anti-Moscow line in order to make peace with hawkish Republican leaders in Congress.”

The upshot of this piece at Foreign Policy is that Vladimir Putin owned the world ’til Donald Trump came along. Donald Trump has now trumped Putin, and Putin is a prisoner to whatever Trump does or what happens to Trump, and it’s in his strong interests for Trump to survive political controversies involving Russia or assassination attempts or what have you. It’s amazing to me, all this stuff is.

RUSH: The last paragraph in this Foreign Policy story: “What is especially dangerous from the Kremlin’s perspective is that certain nationalistic circles in Russia are falling in love with” what Trump is doing in America. “In January, for the first time since Putin returned to the Kremlin in 2012, Putin was not the most frequently cited name in the Russian media; Trump was. And although most of Trump’s Russian admirers, such as Alexander Dugin, are loyal to Putin personally, they also dream of purging the globalist elites who occupy the rooms adjoining their president’s” in the Kremlin.

So this story is all about how Trump has come in, and where Russia thought they were getting a bumbling, inexperienced outsider, they’ve got a guy who’s taken over Putin’s role in the world, what Putin thought his role was. They’ve destroyed a Putin monopoly, and now Trump’s so popular inside Russia that insurgents and revolutionaries in Russia wouldn’t mind a Trump there. At the same time, Putin cannot afford for anything to happen to Trump because if it does, that means the Republicans and Democrats will unify and align against Russia and against Putin whether it’s warranted or not, just because of the state condition, current condition of American politics.