We’re in the Midst of a Political Civil War

RUSH: Jeffrey Lord was on CNN with Anderson Cooper last night and talking about the Ninth Circuit ruling. (interruption) Don’t worry; I know they’ve started. We’ll JIP this thing. We won’t miss the press conference. Here’s Jeffrey Lord making an argument about how Trump could proceed here after the Ninth Circus continued the stay on his executive order.

LORD: Newt Gingrich when he was running for president in 2011, talking about the Hamdan v. Rumsfeld case involving Guantanamo and the rights of prisoners. And Speaker Gingrich said, “I would instruct the national security officials in the Gingrich administration to ignore the recent decisions of the Supreme Court on national security matters, and I would interpose the presidency in saying, ‘As the commander-in-chief, we will not enforce this.'” This is called departmentalism. And this goes back to Thomas Jefferson, who wrote in 1819, “Each department of the national government is truly independent of the others and has an equal right to decide for itself the meaning of the Constitution in the cases submitted to its action.”

RUSH: Okay, were you following that? Now, this is an admitted Trump supporter, Jeffrey Lord. He writes for the American Spectator, and he’s citing actual and true American history. He’s reciting what Jefferson wrote, and he is quoting Newt Gingrich. Now, he’s talking to Jeffrey Toobin. He’s a legal analyst CNN. As far as these people are concerned, there is no coequal branch business. The judiciary runs this country.

Yes, there’s separation of powers, but whenever a court speaks — whether they are condemning the constitutionality of a law from Congress or whether they are condemning a presidential action — the Supreme Court is it. The Supreme Court is the last word. Here comes Jeffrey Lord saying (summarized), “No, no, no. Thomas Jefferson said it’s up to each branch to decide how in the world they are going to define the Constitution’s separation of powers,” and he quoted Gingrich as saying (summarized), “Look, in matters of national security, the court can go to hell. I’m gonna ignore what the court gets wrong because they don’t have all the information I have and I’m gonna implement what I think best.”

Well, now, you can imagine the reaction this got on CNN. 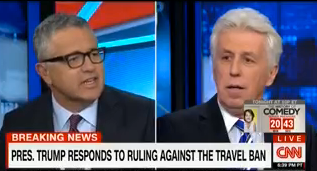 TOOBIN: — that the president of the United States can ignore judgments of the court? You know, Andrew Jackson did it regarding the Cherokee Indians.

TOOBIN: Yeah, Abraham Lincoln did it during the Civil War —

TOOBIN: — which is a little different from what’s going on now. The idea —

LORD: Well, according to all my liberal friends, we’re in a Civil War. (chuckling)

TOOBIN: The idea (sputtering) that a president… You know, much credit to Donald Trump, frankly, for saying —

TOOBIN: “See you in court,” rather than saying, “I’m ignoring the court.”

TOOBIN: — is not something that —

TOOBIN: — anyone should look up to.

RUSH: Wait a minute, kudos to Donald Trump? “Much credit to Donald Trump for saying, ‘See you in court'”? You know, it’s fascinating. Andrew Jackson… By the way, Lincoln did more than what Jeffrey Lord is attributing to him. Abraham Lincoln actually put a sitting member of Congress in jail. He sent the military out to roust the guy up, put him in jail. Roger Taney was a chief justice of the Supreme Court and he gave a ruling that Lincoln didn’t like on habeas corpus, and he almost put Taney in jail. The fact it was a Civil War…

You know, folks, I gotta tell you something.

That’s the only way any of this is gonna end. The left does not want this to end! This is normalcy for the left. You must understand this. This is what they want life in America to be day in and day out. Remember, they are victims. They are not happy. As victims, it is impossible to be happy. It’s impossible to be content. They think there are no reasons to be happy. Even when Obama was winning and he was in the White House, they were still livid and angry every day! Over what? The fact that there was opposition to Obama!

They weren’t even happy when he won. They would not have been happy had Hillary won, because there would have been opposition. And they can’t stand opposition. They don’t think opposition is warranted or justified. So there is no common ground between the divide, the divisions in this country. In that sense, there already is a civil war. I’m not talking about armed conflict. I’m talking about a battle. How does it end? Are you gonna persuade the libs in your neighborhood, do you think? You think they’re gonna persuade you?

It’s intensified with every year of my life.

This is what life in America is gonna be until one side loses and concedes and surrenders. Now, you tell me which side’s it gonna be? And you look at the onslaught and you look at every direction they are coming at us from. Every issue that they supposedly have is nothing more than a trick and a disguised effort to advance their agenda. I don’t care if it’s judicial activism, if it’s climate change, civil rights, equal rights, pro-life, abortion, pro-choice, what have you, funding Planned Parenthood, it’s all about advancing their agenda and eliminating us.

It’s not really about climate change. They succeed in making their brain-dead rank-and-file think that the world will not be habitable in 30 years, but it’s a crock. You tell me where the agreement’s gonna be. You tell me where the compromise is gonna be. They’re not gonna stop until they destroy the Catholic Church. They’re not gonna stop until the Catholic Church becomes pro-choice. You think that’s ever gonna happen?

You think the Catholic Church will ever sanction gay marriage with openly gay priests and lesbian nuns, you think they’ll openly sanction that? Because they’re not gonna stop until they get that, one way or the other. Do you think that’ll ever happen? We have the most socialist pope that we’ve had in our lifetimes right now. The Catholic Church is closer to this precipice, my observation, than it’s been in a long time. But to say that the very things that define Catholicism and Christianity, they’re all under assault. Every damned institution, the Boy Scouts, the Girl Scouts, the Cub Scouts, candy stripers, nothing’s safe.

The judiciary can do whatever they want as far as Jeffrey Toobin’s concerned, as far as every liberal is concerned, any liberal court can tell everybody whatever is perfectly fine, and you can’t argue with it, and you can’t oppose it. And let a president say, “I don’t believe ’em. I’m not gonna obey, the hell with it” and you would think it’d be the end of civilization. So how does resolve itself, my good friends? Here’s more Jeffrey Toobin, and he’s still talking to Jeff Lord about — just play the bite. I don’t know what —

TOOBIN: Well, it’s like a complete repudiation of the Trump administration’s position on this case. And it is also now four judges who have reviewed this — two George W. Bush appointees, two Democratic appointees — and all four have ruled against. The Trump administration now has two options. One is go to what’s called an en banc, more judges on the Ninth Circuit — it would be 11 judges to hear the case — or go directly to the Supreme Court to challenge this stay. 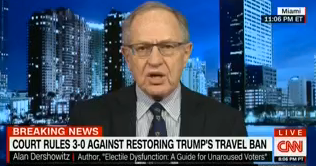 DERSHOWITZ: Third option is for the president to realize he’s not gonna win on this stay issue. He may win three months from now, four months from now, but he has said on camera that this decision poses a grave threat to the national security of the United States. So his option is very simple: Withdraw the current order that is subject to the stay, write a new order with the help of his new attorney general, national security people, that will survive constitutional attack.

RUSH: Ah. Very interesting. Is that possible? Is there a way to survive? ‘Cause it’s not constitutional attack. It is liberal attack. This is what’s happening. Oh, I know it looks like it’s a constitutional attack because of the way the judges talk and the way the judges write. “But, Rush, how can it be liberalism when two of these judges are George W. Bush –” it’s establishment versus outsider, liberal versus conservative, you name it. Trump is the object of scorn, and he could write the perfect executive order.

These guys have already ignored the law once. They’ve ignored that statute which is as crystal clear as two plus two equals four. They’ve ignored that to stay this executive order. You think they won’t just find another reason and be able to couch it in some legal mumbo jumbo to suggest that it’s unconstitutional? Of course they will. One more Dershowitz, then we have to go to the time-out. He continued and concluded, actually, with this.

DERSHOWITZ: There’s another way that he can do it, too. He can leave this order in effect, leave it subject to a stay, and then issue a new order which supplements the order. That way he protects his ego, he doesn’t have to say, “I was wrong.” He just says, “Look, there’s a stay in effect. I’m now gonna issue a new order, and that new order applies only to A, B, C.”

RUSH: Now, there are areas here that gave it trouble. I mean, issuing this blanket ban on entry to people that had already passed muster and were green card holders, I mean, he’s well within his rights to do it, but that was gonna present problems from the get-go, and they did this with no advance warning so as to prevent what’s happening now.

What’s happening now is that we’re being flooded by refugees from these seven countries and even Bashar al-Assad, the evil foreign from Syria, is saying, I know some terrorists from here are getting into the United States now. There have to be. The law of averages. Some of the people you’re letting in are terrorists. I have no doubt. No doubt whatsoever. But that’s okay, folks. That’s okay, ’cause we have to stop Trump and the Republicans.