THE PRESIDENT: — and do good for our country. It’s always gonna be that way, at least during my administration, I can tell you that.

ABE (via translator): Of course we are fully aware of President Trump’s decision. On the economic issues we will be discussing at the working lunch to follow. As for Japan and United States, a trade investment as well as economic relations, how can we develop and grow our relationship. As I have already mentioned, our deputy prime minister Aso and Vice President Pence have all created a new framework for dialogue —

RUSH: Yeah, right on. Agree with that a hundred percent.

ABE (via translator): I am quite optimistic that the good results will be seen —

RUSH: Me, too. Absolutely. No question about it.

ABE (via translator): Now, for who will be free and fair — (crosstalk)

ABE (via translator): — and that was the purpose of TPP and that importance have not changed. I myself believe that.

RUSH: Right. There you have it. We’re all in, we’re not part the way in, part the way out, screw it, TPP or nothing.

REPORTER: I have a question to Prime Minister Abe.

RUSH: Translation: Mr. President, are you preparing to resign? 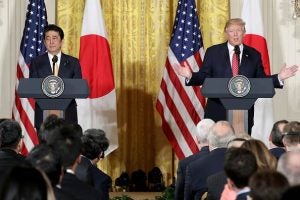 REPORTER: — in the prior remarks there have been discrepancy in your positions.

REPORTER: — what were the discussions and were you able to narrow down the gap? And President Trump has said that he will make the United States a great country.

RUSH: Okay. Look, I knew this is gonna happen. Let’s bump out of this. This is my bad. I did not know this was a joint presser or I would have not committed to joining this in progress. And I think the whole thing is gonna be like this. You just can’t ignore the Japanese prime minister there when you’re trying to destroy President Trump. I mean, you’ve gotta include the Japanese prime minister in your destroy-Trump questions, and that’s gonna lead to the translations and the two voices at once, which make it very difficult to follow.

So, we’ll take a break here. We’ll get started with more of your calls on Open Line Friday and anything that happens here at this presser, we’ll be ready to JIP it. Sweat nothing, folks.