And Now Something for the Stick-to-the-Issues Crowd: Shaft Talk

RUSH: You know, folks, I need a break from this, I tell you. Next hour I’m gonna tell you about I switched shafts in my driver and got 25 additional yards. You know, I’ve been one of these people, I’ve had these golf-centric nutcases, played with some of these guys that are just nuts about it. “You know, you need a different shaft in that club.”

“What do you mean, a different shaft?” 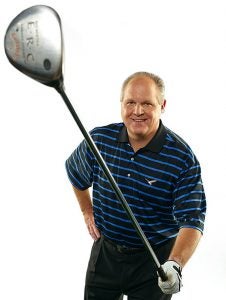 “I don’t swing the club fast enough for –”

RUSH: Now, I want to tell you about this little golf shaft business, because I know some of you in this audience are golfers, some aficionados and some just hackers. I love the game, and I have been playing really well. I shot a 76 three weeks ago. I never shot anywhere near 76. Maybe 80, but not recently. And it was a magic difference. Folks, it was just… It seemed effortless, as it should. I mean, there was no mental stress. My mind wasn’t polluted with all kinds of thoughts. The ball was going where I was aiming. It was just… I’ve never had a day like it.

I mean, I was putting for birdie practically every hole, driver in the fairway. But here’s the thing. A couple rounds after that I have a friend who’s a club kook. I mean, new clubs. He goes and gets it. New putter, new driver. He’s constantly trying things and these guys are always trying to get you to do what they do. “Here, hit my driver! Here, try my 5-iron! Here, try this 3.” You do it ’cause it’s easier than saying no, and I’ve been hearing all my life about the importance of a shaft in a golf club. I say, “What is this?” “Well, they say the shaft is the engine of the golf club, Mr. Limbaugh.” And I’ve always thought, “The shaft? Doesn’t matter.

“When somebody wants me to try their club, it doesn’t matter. It’s never the Indian. I mean, look at the guys like Ben Hogan. Look at these guys that played golf back in the twenties. They’re hitting the ball farther than we do with 100-year-old equipment. It’s not the equipment. It’s whether or not we have a good swing. It’s whether or not we put the club on the ball. I mean, you hit your driver X well so I grab it, don’t hit it as well as I hit mine. It’s the swing! It’s not the club.” But people insist.

So I, in many cases, just to entertain — ’cause it’s easier than providing, you know, resistance. I actually tried two different shafts in a new driver I’ve got. It’s the Callaway driver. It’s the Epic Driver. And I’m not kidding. What was the name of the shaft? KINETIXx. K-I-N-E-T-I-X-x. There’s a bunch of different kinds. It’s weights, whether they’re stiff, whether they’re regular, flex, what have you. But I’m not kidding. Same driver, two different shafts, the shaft that I hit second literally I hit the ball 270 yards and with the other shaft, 245, 250.

So I left that shaft in for the whole day, and it’s still in, and I’m hitting that driver 20 yards farther consistently with a different shaft — and my eyes were opened. I never believed that. I mean, a shaft is a shaft to me. So I thought I would mention this to the golfing community out there ’cause I am sure many of you people in the golfing community already believe this shaft business and how big a difference it makes. I didn’t until I actually saw this. So we put the shaft in a different driver. We tried all kinds. Same driver, different loft. I use nine-degree loft; my friend using ten and a half… (interruption) Oh, Wendy, it is not the shaft? (interruption) Oh, that’s right, the shaft talk is making the show interesting to you? That’s what it is?

I wondered why there’s so many smiles in there. I’m not talking about stiff shaft and regular shaft and flex and this kind of stuff and getting a lot of distance out of this. Yeah, now I actually am relating to more people than I thought here. Anyway, bottom line is, same deliver head with a different loft, ten and a half, same shaft, different player, got a little bit more distance out of it. The shaft was the difference. I mean, the driver head’s the same, the swing was the same. (interruption) No, it’s K-I-N-E-T-I-X-x, with a little X — KINETIXx — and I can’t tell you right now. I’m sorry. I’m not trying to pitch these.

I don’t know what shaft is in the club. In fact, I don’t even have the car today that has the clubs. But I know you’re gonna want to know so I’ll tell you. But, folks, I’m 66 years old and I’m hitting the ball farther than I ever have. It’s 270 yards! I mean, that’s huge, and it’s fun. It’s fun. I mean, when you connect and it’s driving — it’s flying — and you know you hit one, you just stand there staring at it. We in golf have a term for that, which I cannot utter.