When President Truman Defended His Daughter

RUSH: The next caller is reacting to something I said an hour-and-a-half ago, and that’s even unfair, but it’s just the way things worked out.  So if you didn’t hear the call, let me briefly set this up.  Donald Trump tweeted out today his anger at Nordstrom for canceling his daughter’s fashion line in their department stores.  And on CNN and the Drive-Bys elsewhere they just creamed Trump for doing this.  “It’s not presidential.  Presidents don’t do this.  Fathers do this, yeah, but presidents don’t do it.  Presidents don’t go out and pick winners and losers and attack American businesses over businesses decisions.”

And of course I then sought to put this in proper perspective and explain it would not hurt Trump because this is exactly the kind of thing Trump voters want and expect and cheer, because it wasn’t a business decision; it was a political decision, and people are fed up.  Businesses have been politicized by the left and the Democrats and it’s gotten way out of hand and people are fed up with it. And so Trump defending his daughter against a political attack, perfectly fine, most people think.

They wouldn’t learn a thing talking to them because of their arrogance and their condescension.  It’s not just Donald Trump defending his daughter, which is fine and dandy, as far as they’re concerned.  It’s also perfectly qualified, perfectly permitted because it’s political, just like these judges are acting political and not judicial.  So here we have a guy that wants to respond to all this that I said, and it’s Junior in Polk County, Illinois.  Hi, Jr. Great to have you with us, sir.

CALLER:  Oh, okay.  It’s a privilege and honor to talk to you, Rush.

CALLER:  I’ve been listening to you for a long time.  Anyway, about the Donald Trump, just because he’s president, doesn’t mean he quit being her father.  And I remember a Democrat president by the name of Harry S. Truman who not only defended his daughter from review that was made about her singing, but he threatened bodily harm to the reporter.  And so I just thought I’d mention that.

RUSH:  Yeah.  In fact, you are exactly right about that.  How many of you do not know this?  Harry Truman, Democrat, I mean, you want to talk about divisive, Dwight Eisenhower was elected president to replace Truman and on the inauguration day where the new president comes and has coffee, tea, or bourbon, whatever, at ten o’clock in the morning, Eisenhower and Mamie showed up and he never got out of the car. He didn’t go in to greet the Trumans. They rode over to the inauguration in dead silence.  It was very, very frigid and chilly in the car.

I don’t know if Harry Truman would have liked Putin or not.  Probably not.  I don’t know.  You know, this whole thing reminds me of a — thank you very much, Junior, for the call.  I appreciate it very much.  I have to tell you a little story since Margaret Truman come up.  Early on in this program, I mean within six months, either latter part of 1988, first parted 1989, a caller called here, remember the show’s brand-new, we’re not even probably on a 110 stations yet, but we are on in my hometown of Cape Girardeau, Missouri.

And a caller calls in and, you know, wanted to talk about the attractiveness of presidential children and wanted to get my opinion on what I thought.  And so I answered the caller with as much — I’m trying to be polite to the caller, I wanted to answer the question, I didn’t want to appear to be avoiding it, so I mentioned some names and my thoughts and all that and expressed sorrow when I thought it was warranted and so forth. 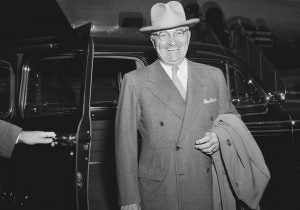 And when program was over, my mother called me.  It’s when I could still hear and still use the phone.  And she just gave me hell.  She said, “I don’t care if you thought you were being nice to a caller, you can’t talk about people that way.  You just can’t.  They have no control over it.  It’s not anything to do with them.  You’re gonna have real trouble, Son, if you’re gonna continue to answer people who question you about what you think of the way people look.”

And then there was a pause, ’cause I’m feeling really chagrined.  She said, “Besides, you forgot Margaret Truman.”  (playing of song)  Barbara Chenault Law.  (continued playing of song).

You want to hear the letter that Harry Truman wrote to the music critic in the Washington Post? Here’s the letter to the Washington Post music critic, Paul Hume. He gave Margaret Truman a very negative review of a concert performance that she gave one night in Washington. Truman sent him a letter the next day. “Mr. Hume: I’ve just read your lousy review of Margaret’s concert. I’ve come to the conclusion that you are an ‘eight-ulcer man on four-ulcer pay.’ It seems to me that you are a frustrated old man who wishes he could have been successful.

“When you write such poppycock as was in the back section of the paper you work for it shows conclusively that you’re off the beam and at least four of your ulcers are at work. Someday I hope to meet you. When that happens you’ll need a new nose, a lot of beefsteak for black eyes, and perhaps a supporter below! … I hope you’ll accept that statement as a worse insult than a reflection on your ancestry. H.S.T.”