The Democrat Party Is a Hate Group

RUSH: The Democrat Party is a shrinking and dwindling hate group. That’s literally what they’ve become. You know, I remember the reason why I say that and why I think that this is an important point. Early in my career, when I was still learning about all this, when I was wet behind the ears and naive… Up until the time I started this radio show, nobody that knew me ever thought I was a hatemonger or a racist or homophobic or sexist or bigoted or any of that. Nobody. There wasn’t anybody.

Six months after being on the radio with this program, I’d become all of that. And I remember… I don’t want to mention names here because these people are still alive. But I remember a prominent conservative media figure, talking to him about prominent liberal media figures that he knew, that he liked. And I questioned him. “How can you trust these people? I mean, these are…” “No, no! They’re good guys. They’re good guys. In fact, one of them likes you, says you’re not a hater.” And I was supposed to be thrilled to hear this!

I was supposed to be mollified that some liberal media figure had just pronounced I was okay because, after he had listened to me, he had determined I wasn’t a hater. I did not take that as a compliment, and I got kind of mad, just like I did when Algore was in that vice presidential debate, 1996. Bob Dole is the presidential candidate for the Republican side, and Gore and Jack Kemp, VP candidate, have a debate, and Gore tells Kemp (paraphrased), “You’re not like the rest of your party. You’re not a racist, Jack.” 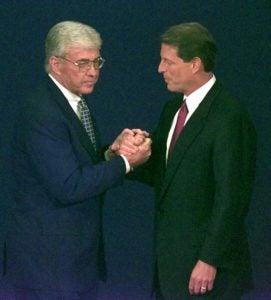 And Kemp said thanked him! “Yeah, well, the way we look at it, Limbaugh’s not a hater.” Of course, that’s out the window now. They all think the opposite. They are the hate group. The Democrat Party, that’s their fuel. That’s what energizes them is their hate. And for them to sit here and act like they’re the most compassionate and tolerant and peaceful and understanding is just a bunch of hogwash. The American people that voted for Trump are hated. The Republican Party is hated. The alternative conservative media is hated.

George W. Bush, Ronald Reagan, Donald Trump. Take your pick. They are hated; they are not opposed, and I wish an even bigger percentage of the American people would figure this out. The American people are running around thinking that all the hate and the racism and all these other isms are located on the Republican Party side. The Republican Party has bent over backwards not even criticizing Democrats in hopes that people wouldn’t think they’re what the Democrats say they are, while the Democrats go out and behave that way times ten all the time every day and never get called on it.

Last night on CNN there was a debate, Ted Cruz and Crazy Bernie on Obamacare and getting rid of it. Crazy Bernie was great. We didn’t even need Ted there. Ted was great, don’t misunderstand. But Crazy Bernie told them why Obamacare was worthless and horrible and we should get rid of it better than any Republican ever could.

I’m getting a little ahead of this only ’cause there’s something Cruz says in this bite that I want to amplify. Bill Hemmer said, “Elizabeth Warren was asked to conclude her remarks based on the maligning of another U.S. senator” — that being Jeff Sessions. “A few years ago, Senator Cruz, you were criticized by some Republicans for going after Senator McConnell on the floor of the Senate. Is this different, or not, Senator?”

What many of the Senate Democrats are taking as the lesson of this election was that Hillary is too moderate and they need to go more Elizabeth Warren, more Bernie Sanders, more extreme and on the fringes. I think that’s really unfortunate, and I think last night you saw that with Elizabeth lashing out at Jeff Sessions and really lashing out at the American people.

RUSH: And that is the point. All of this unrest and all the riots and all the protests, really the anger is at all of you who voted for Trump and voted for Republicans. That’s really the nub of it. They’re angry at Trump, but Trump wouldn’t be there if it weren’t for you. They are angry. They feel rejected. The American people, and I’ve already told you how they think of Trump voters. They think Trump voters are uneducated, Deliverance types. You’re fools, you’re idiots, you’re uneducated, you’re unsophisticated, you’re just an embarrassment, you’re an American embarrassment. You voted for Trump over Hillary, and they’re outraged, and Cruz is exactly right, at you.

RUSH: Steve in Omaha, you’re up first today, sir. Thank you for waiting, and hello.

CALLER: Absolutely, Rush. Wonderful to talk to you today.

CALLER: Oh, no. As a matter of fact, really the second point I think is that all this is going on because — how do I say it? — this has been going on for an awful long time. The fact that they’re doing this, they’re not gonna pick and choose, you know, their battles. They’ve dug their heels in. They’re gonna disrupt as much as they can for as long as they can.

CALLER: The strategy that the Trump people ascribe to I think McConnell or whoever in the Senate of having the Sessions vote be last so that he could still vote on all the others was brilliant, but don’t let down the guard. This is something that is not gonna stop. They’re gonna keep it up, and if they relax, then, you know, you just can’t coast, you can’t say okay, now we’re past that.

RUSH: Well, that’s, of course, a lesson learned over countless years’ experience, guided by intelligence, and we all hope the Republicans see it the way we do, and we all hope that they maintain a stiff spine and so forth. The experience is that they haven’t, so that’s what everybody’s guarded about, but you’re right, they’re not gonna go way. The real thing here, though, it is hate that is fueling them.

Now, hate, folks, it’s like I said yesterday when you talk about making everybody a victim, which is what the Democrat Party has done, every voting member, other than the elites in Hollywood and academia, but the rank-and-file Democrat voter is also filled with hate, whether he’s on the protest march or not. And it’s because he has accepted the victimhood status assigned to him by the Democrat Party. And when you accept that you’re a victim, that’s a very personal decision. I mean, somebody can call you a victim, but you don’t have to accept it, you don’t have to act that way.

But when you choose to, when you’ve made up your mind that you are a victim, you have given up all hope for happiness. You can never be happy. You can never even be content. Those two things don’t go together with victimhood. And you add the hate to the victimhood status that these people have willingly adopted, when you’re a victim, nothing’s ever your fault. It’s always somebody else’s fault. In this case, the Republicans.

And so you have been told to hate them and blame them, which as a loyal Democrat, you’ve done, so you have roiling, churning emotions that a bottle of Tums every day is not even gonna touch. You are just boiling over with victimhood and hate. Precluding happiness, precluding enjoyment, precluding and eliminating any chance for contentment. And you have to keep that up because you are forever going to fail as a victim.

As a victim, you have accepted that there’s nothing you can do about what is happening to you. It is always somebody else’s fault, and no matter what you do, you are consigned to whatever miserable life that you have. And so you talk about 30, 40% of the country that is this way, why would it subside? The ingredients for never-ending miserableness, unhappiness and hate are fed to you every day by the people you respect and admire, elected Democrats and the media and pop culture and so forth. So, yeah, they’re not going anywhere.

RUSH: Try this, folks. You think that they’re not a hate group and you think the Democrat Party isn’t unhinged? “Planned Parenthood president Cecile Richards,” who’s the daughter of Ma Richards, who is the former crime boss of Texas, “urged women Tuesday to push the pro-abortion movement to the next level by publicly bragging about their own abortions, saying the next step is get rid of the ‘stigma and shame’ surrounding abortion.” You mean they haven’t done that yet? Abortion became legal in 1973.

I thought they’d gotten rid of the “‘stigma and shame’ surrounding abortion” by converting pregnancy into an illness, which they’ve done. Pregnancy is an illness. It victimizes (there’s that word again) women. That’s right! Pregnancy is victimhood. “‘I think it’s time for us to be bold,’ [Ma Richards’ daughter] said at a women’s conference in California. ‘And so I want to ask you to do something or think about doing something. And that is to share your own story. This is the time to do it.'”

We want women bragging about their abortions! (laughing)

For what purpose? What would possibly be…? (interruption) Are they…? (interruption) Wait a minute. Wait a minute. I can answer my own question. They’re trying to encourage more abortions. But every time I’ve accused them of that over the years, they’ve fought back. “No, no, no! You’re mischaracterizing us, Mr. Limbaugh. We’re not trying to promote abortion.” The hell you’re not! If an adoption clinic opens next to a Planned Parenthood clinic and a woman walks into the adoption clinic, the first thing Planned Parenthood does is try to go get her and talk her out of the adoption.

It literally is rotting their brains, and if they think this is the way you grow a political party? (snorts) They continue to illustrate they do not know America.

RUSH: Any of you leftist women want to call here, brag about your abortions, and maybe tell us how many instances of breast cancer you’ve had, feel free. Have at it! Let us hear from you. ‘Cause, you know, the incidence of breast cancer in abortion is higher. You know that, right? Brag about it. Call us.