The Super Bowl Wasn’t the Greatest Game Ever

RUSH: I want to go back to the Super Bowl for a second because there’s a story here that the ratings are down. “The Super Bowl on Fox attracted an average of 111.3 million TV viewers, according to Nielsen. This makes it the fifth most watched Super Bowl in” histoire, number five. “Historic Super Bowl Didn’t Have Historic Ratings,” and there are stories out there today that say there aren’t any indications that it’s gonna get better, TV ratings for the NFL. Now, I have a question. How many people — and maybe you even thought so yourself.

See, I don’t, and I know I’m way off over here on the fringe on this. There was another playoff game — I think it was a playoff game — that featured an even greater comeback than this. The old Houston Oilers in Buffalo against the Buffalo Bills. (interruption) See, they’re frowning at me. They didn’t even know anything about it. This was the greatest comeback in NFL history. The Houston Oilers went out to like a 35-7 lead in the first half, and ended up losing the game in the second half. The Bills came back with their backup quarterback, Frank Reichhhh. 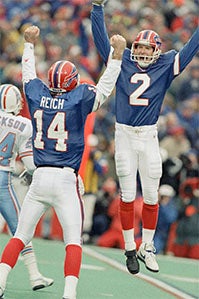 Now, that’s a bigger comeback than this was. I think it was a postseason game. But even if it wasn’t, why isn’t that an even greater game than this? You might be saying, “Well, how did Buffalo come back?” Because Houston laid down in the second half! I mean, for crying out loud… You know part of a comeback… I was telling people at halftime in the Patriots game with the Falcons, “Not only do the Patriots have to start on an unstoppable run on offense, they’ve gotta stop Atlanta. They can’t allow Atlanta to score any more points.

“If for every touchdown the Patriots score, the Falcons just get a field goal or touchdown, it negates it, so they’ve gotta stop them,” and they did. But I think there was a greater game than this. I know many are gonna say, Well, yeah, but you’re a Steelers fan.” Well, the Steelers-Cardinals Super Bowl that played over in Tampa that featured a 100-yard interception return by James Harrison — a last-minute touchdown toss from Roethlisberger to Santonio Holmes — and the game was exciting to the very end because the Cardinals were on the verge of coming back.

It was a competitive game. That second half was not even competitive, and I don’t know how in the world you call that the greatest game ever when the Falcons essentially weren’t there and couldn’t do anything right. They couldn’t stop New England. Well, that’s because of the profess… I’m not taking anything away from the Patriots. I don’t mean to be doing it at all, but the other team may as well have not been there. It was a totally different team second half from first half. I don’t doubt it’s a great game to watch.

If you’re an Atlanta Falcons fan, there’s no way that’s the greatest game in NFL history. No way. So, yeah, I’m arguing with the characterization of this game by sports media. I’m not saying it was a bad game. I’m not upset at who won and who lost. I didn’t have a dog in this hunt. It didn’t matter, other than my prediction, which of course I nailed. But greatest game ever? I don’t know how you can say that when one of the two teams for the entire second half basically didn’t play and did stupid stuff. How do you take a sack? How do you not throw the ball away? You’re out of the pocket! Just, you know, throw it to the press box. Find Lady Gaga; throw it to her. Get rid of it! Ryan took a sack.

RUSH: Joe in Far Rockaway, New York. It’s great to have you Joe. How’s it going?

CALLER: Very good, sir. Thank you very much, Mr. Limbaugh, for taking my call. I’m a first-time caller, and you were discussing the Super Bowl and how the ratings were down. Well, maybe we can account for it, because I’m one of those that boycotted it. I saw over the course of the year that quarterback not standing up for the flag. I saw last year’s halftime performance. I mean, yada yada. We can go on and on.

CALLER: Oh, it had some so-called singer in a… I think was some sort of militant outfit dancing.

RUSH: It was the famous Beyonce, a tribute to the Black Panthers.

CALLER: Yes. Well, I think that might have accounted for the lower ratings, because I think that is the message which we — if you want to call us on the right or real Americans — received.

RUSH: Well, okay, but let me ask you this. Obviously you didn’t have an interest in which team won because you’re obviously not a Patriots or Falcons fan, right? If you had been, if your team would have been in the game, would you watched it?

CALLER: No, I would not have.

RUSH: Are you kidding me?

CALLER: No, I’m very serious, and I wanted the Patriots to win despite them being from Boston because of the old rivalry with New York. But, you know, he did support Donald Trump, and I believe the owner also and the quarterback there, that would have been motivation for me to watch, and I’m glad that they won. But I have a real problem —

RUSH: Who do you think stole Tom Brady’s jersey?

RUSH: If it does, it’s worthless now, ’cause nobody can authenticate it. You know, the way this jersey stuff works, folks… And Michael Jordan wore a different pair of Air Jordans every game, and every pair of shoes was donated to charity, was used for fundraising. With the NFL, every team… I take that back. Teams are different. But most teams, the players get two jerseys, home and road — two home jerseys, two road jerseys — a year. And this is to prevent these things flying out of the locker room and being sold on eBay after every game.

I mean, if they get ripped, they get sewn up. If there are holes in them, they get sewn up. Some teams are not as strict on this. But I know in the old days… I don’t know if this still true of the Steelers, but this is the way it was. In the case of Brady, I think he wears a different jersey every game, and he gets first dibs on whether he wants to keep it or not. And if not, then some of them go to the Hall of Fame in Canton. Some of them are donated. They’re used for fundraising, charitable things. This jersey, he wanted. 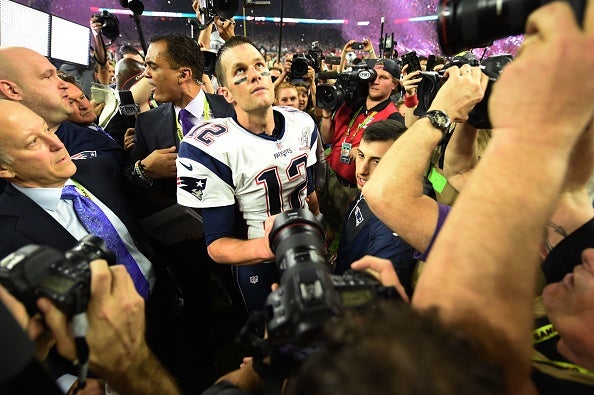 I mean, this jersey encapsulates all of the records, and he thought he put it in a bag in his locker when he took it off, and he went out, he did the postgame interview, came back, and it was gone. When I heard that, I said, “How does that happen?” Why don’t you give it to a clubhouse guy? Give it one of the guys that deflated the footballs. Sorry, just kidding! I’m just kidding! That’s my style of humor, just to rag. Just give it to a clubhouse guy. This is what is normally done for safekeeping.

When a rookie catches his first touchdown pass or scores his first touchdown in the NFL, he gets that ball, takes it to the sideline, gives it to an equipment guy, and they lock it in a trunk. They mark it and they lock it in a trunk so that it doesn’t get lost during the game and it’s available after the game for the rookie to keep and put on his trophy counter or wall or whatever. This jersey, the fact that this is missing — and here’s the thing.

Now since it’s missing, there are legitimate Brady jerseys out there — and, by the way, the New York Giants were involved in a memorabilia scandal once where they were accused of faking game jerseys and making brand-new game jerseys look like they had been muddied up and dirtied up in games, and they were being distributed as actual game worn-on-field souvenirs, when they weren’t. This is a big business. It’s a big deal.