Paul Ryan: We Will Repeal Obamacare This Year

CALLER: Yeah. I have been trying to get through to you for weeks. So I thought it was impossible, but it was worth it, because I really enjoy listening to your show. I’ve been listening for five years now.

CALLER: Yes. And I have an 8-year-old brother. He is a big fan of your books. But what I wanted to ask you is why does it take so long to kill Obamacare?

RUSH: Well, let me tell you. Sean Spicer’s doing the press briefing right now at the White House, and he was asked a variation on that question. (summarized exchange) An infobabe in the press corps said, “Are you happy with the president saying that it might not be 2018 or might be 2018 before we can actually do anything meaningful on the repeal of Obamacare?” Because the president did say that. And Spicer said, “Look, we have not changed our minds on repeal and replace, but that is a monstrous piece of legislation. It’s over 2,000 pages. The Democrats spent their lives writing it. We weren’t even allowed to see what it is — what it was — until it was passed.”

He reminded people Pelosi said, “We have to pass it to find out what’s in it.” And so he was saying that dismantling this is going to be a huge project. You can’t just — it’s not like a building that needs to be destroyed, you go in and dynamite the thing and raze it. This has to be unwound and unraveled. And here’s the sticking point, Rita.

RUSH: This is their sticking point. Their sticking point, what is being said about this, “Well, now, wait a minute. There are 20 million Americans who have insurance through Obamacare, and you can’t just take it away from ’em. What is gonna happen if you just go in there and blow it up and take away their health insurance? There are 20 million Americans who didn’t have health insurance before Obamacare, and now they do.”

CALLER: Yeah, ’cause I’m just so sick of the left attacking our president. They just need to step aside and give him a chance.

RUSH: Not gonna happen. He’s going to have to force them aside. They are not going to willingly step aside. They can’t take the chance, as far as they’re concerned, that Trump’s agenda would succeed, ’cause if it does, it will blow their agenda to smithereens. If Trump’s agenda succeeds, he will have just proven the Democrat Party is unnecessary. He will prove that the Democrat Party’s not needed. He will prove that their agenda all these years has actually been a drag on this country. They’ve got every incentive in the world to see that Trump fails, and they’re gonna do everything they can to make it happen.

That’s why Trump needs all the allies he can get. He needs all the people standing behind him, reassuring him, giving him confidence to keep his confidence. He needs fellow warriors who want to make this country great again by eliminating all of the dastardly liberalism that’s found itself woven into the fabric of our country. It’s got to be obliterated and he’s hell-bent on doing it, but he’s not going to be able to do it alone.

And I guarantee you this, Pam. If they can ever come up with a poll that’s accurate that shows his approval numbers around 40 or 42 or 45, then you watch, that’s blood in the water, and the sharks are gonna start circling, and whenever that poll, if it ever happens, they’re gonna say Trump’s already failed, he’s lost his voters, he’s lost his base, and they’re gonna say that poll means the American people no longer want what Trump is offering and what he was offering in the campaign. I mean, this is all what they have planned. They can produce that poll any time they want to, understand.

The Democrats know that Trump’s ideas are going to work. They may not like it. They may think Trump is a nationalist and a populist and he wants to get America out of the world. And, of course, they’re just the opposite. They want America shrunken to become part of the world and nothing special in the world. Trump wants us to be exceptional and great again and leading the world. They don’t want any part of that. But he doesn’t have the support group that Obama had. Obama had the media, Obama had academia, Hollywood, pop culture, loving him, supporting him.

RUSH: Trump’s got none. He’s got nothing but you who voted for him.

RUSH: And himself. And it’s a great thing he believes in himself. And it’s a good thing that he likes himself. And it’s a good thing that he’s undeterred by any of this so far. That I happen to know. But to answer your question, Obamacare, the 20 million who have insurance, supposedly. I mean, the truth about Obamacare is it’s a disaster. It’s unraveling before our very eyes anyway. It will implode on its own weight, as it was designed to do. Rita, Obamacare’s ostensible purpose was to fail with Democrats in charge so that they can say, “Hey, we tried all these free market reforms. We tried letting the insurance companies run the show. Hey, we tried.” Obviously doesn’t work. We need single payer run by the federal government, which in that scenario would mean the Democrats. That’s what was on the agenda.

So Obamacare is failing as it is designed to do. I mean, the number of enrollees is way below what the projections were. The number of people that signed up for this, the 20 million people that have insurance that didn’t, I mean, they pull that number out of thin air, and it’s designed to make everybody stop, “Oh, yeah, that’s right.” 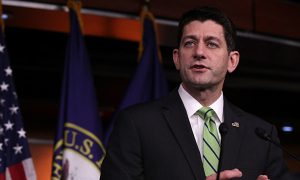 And I was hoping that it would bleed over and influence the way the Republicans began to behave. I thought that was one of the real values of what Trump was demonstrating, and I am convinced that that’s one of the primary reasons he has so much support and why, as long as he keeps doing that, his support’s not gonna vanish. But in terms of the Republicans learning it, there’s some signs, some evidence, but not a lot. I appreciate the call, Rita. I hope that helps.

RUSH:  Well, I just saw it.  I just saw Paul Ryan on videotape saying they are going to have the repeal of Obamacare done this year, it’s gonna be done, we’re gonna repeal it.  The question is, when do we replace it and with what.  So he was followed by Jim Jordan from Ohio. By the way, the conservative caucus in the House, I mean, these guys are doing great. Do not interpret anything I say about, quote, unquote, Republicans to affect them.  Jim Jordan is saying (paraphrasing), “What do you mean?  It’s a bad bill.  It’s falling party.  Get rid of it.”  And the infobabe, “Well, what are we replace it with?”

It’s bad.  Whatever ends up is gonna be better than what it is!  Even if it’s nothing.  We can come up with policies that people can actually afford.  The people that have Obamacare now need subsidies for it.  The idea that we’re getting rid of something that’s good is absurd.  It’s falling apart.  It’s a bad deal.  Repeal it!  And I have to agree with him.  All this talk about, “Well, but what do we replace it with?”

You know, Susan Collins and one of her partners in crime has got a compromise bill that will say if you like your Obamacare, you get to keep it.  She’s dead serious.  And she’s proposed that as being part of any kind of a repeal and reform.  Well, you can’t do that.  The bill is bad.  Obamacare is bad.  Getting rid of it would be good, which is the whole point.