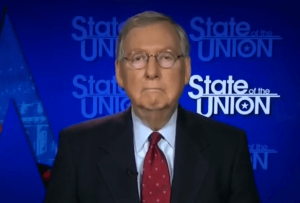 “[McConnell] on Sunday was pressed on CNN about Mr. Trump’s recent statements, and repeatedly said he disagreed with them.” Now, one of the things that Trump’s really being ripped over the coals for, is Trump did an interview are O’Reilly for the Super Bowl. You know when that interview was done? Friday. They did the interview in the White House on Friday. This is… I know most people think those interviews are live, with the president taking time out from his Super Bowl party in the White House. But Trump was here over the weekend, so that interview took place on Friday.

And Trump was being queried about Putin. And so Bill O’Reilly said, “Putin’s a killer.” And Trump said, “Well, you know, we’re not so filled with innocent people ourselves.” And the roof blew. You would have thought that Barack Obama was back — except when Obama said stuff like that, nobody cared. And so now the same people who covered for Obama… The same people that when Obama was doing worse than that, Obama was out apologizing for America, Obama was admitting to the Chinese that we really shouldn’t be lecturing you ChiComs on civil rights violations because, man, do we have a history of it ourselves.

Remember that? There were frequent examples with Obama, even when it came to immigration, telling other nations, “Well, you know, we haven’t been perfect in this area, so we’re not gonna preach to you!” With Iran and the nuke deal, Obama was saying, “Well, imagine what would have happened if somebody told us we couldn’t have nukes?” And it was always a moral equivalence. And when Obama did it, the United States was always guilty. The United States always had some explaining to do.

I don’t pretend, folks, to be able to explain to you what Trump’s attitude toward Putin is and why there is this unwillingness to categorize Putin in the ways that most people actually view Putin. I have no idea what it is. But I don’t think it’s gonna be long until we find out. But I need to ask some serious question. If you’ve listened to this campaign, if you’ve paid attention to the campaign, you saw Trump rally after Trump rally where all he did was stand up for this country. All he did time after time after time was talk about his effort to “Make America Great Again.”

And it’s clear that he thinks America lost ground in competition with foreign countries, trade deals, jobs, economics. But how anybody can then, after hearing Trump promise to work so hard and to tell people, “You’re gonna get so tired of the winning ’cause we’re gonna start winning again! Our country’s gonna start winning,” then Trump has one of these comments, “Well, you know, we have our killers, too,” or I forget the exact quote, whatever it was.

And to take that to mean that Trump doesn’t understand American exceptionalism and doesn’t believe in it, when Obama got a pass — routine pass — numerous times for saying things much worse than that? I don’t know. I don’t know what Trump meant by it. I don’t know why he felt the need to defend. If that’s what he was doing, if he was defending Putin under the blithering assault of Bill O’Reilly and calling him a killer. But now guess what? Putin is demanding an apology from Fox News!

Did he threaten to sue or is he just demanding an apology? (interruption) Yeah. Wouldn’t it be great if Putin sued Fox News for defamation? (laughing) O’Reilly. Folks, I promise we’ll get to the bottom of this and find out what this is all about. But this business with McConnell, this is something that I have known (I’m sure you have, too), that just because Trump won the election doesn’t mean all these Republicans in the leadership are on his side. I mean, many of them are just waiting for what they consider to be the best opportunity that will present itself for them to distance themselves from him.

McConnell poured cold water on the pledge by Trump to launch a national investigation of voter fraud. The president has claimed without evidence that millions of people voted fraudulently in the presidential election. This is a Wall Street Journal story. So keep a sharp eye on that. 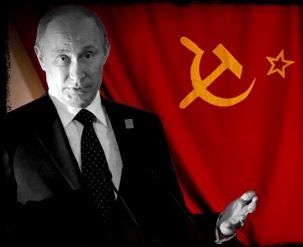 Here’s the Sky News report on the Trump-Putin dustup. Bill O’Reilly used the word “killer” while pressing Trump on whether he thought he would get along with Putin. O’Reilly said, “Putin’s a killer.” Trump said, “There’s a lot of killers. We’ve got a lot of killers. What? You think our country is so innocent?” That’s what set off the fire alarms. “You think our country’s so innocent?” No. No, no, no. Don’t misunderstand. I can totally understand people reacting to that.

My question is where was the reaction when Obama was doing that and worse? You know, when Obama was out there establishing that America was guilty, that America’s superpower status wasn’t really deserved, that the world was out of balance when we, the United States, were the lone superpower in the world. And when Obama belittled American exceptionalism (imitating Obama), “Well, you know, I bet in Denmark they think they’re pretty exceptional too. In Yemen, even in Yemen they think they’re pretty exceptional, too.”

The human condition since human life began has been, for the vast majority of people, real suffering. The United States comes along and all of that changes. That’s American exceptionalism. Not that we’re better than anybody. But Obama heard that as us saying we’re better people. (imitating Obama) “No, that’s not right. We’re not better. In fact, we’re worse, because of our past.” It was convoluted. Nobody ever harped on Obama. Of course nobody ever harped on it for anything. We all know why.

Kremlin spokesman Dmitry Peskov said, “We consider such words from the Fox TV company to be unacceptable and insulting; and, honestly speaking, we would prefer to get an apology from such a respected TV company.”