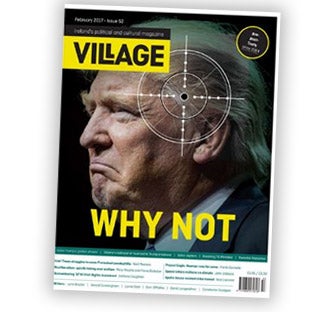 RUSH: You see where Vanity Fair and the New Yorker have pulled out of the White House Correspondents Dinner? (interruption) Oh, are they still gonna have it? Ha!

You bet they’re gonna have it. They can’t wait to have it. If I were Trump I wouldn’t go. I don’t know if they’re gonna have — by the time this thing, you know, it’s usually late April or early May, the White House Correspondents Dinner, and with Vanity Fair pulling out, that’s a big party pulling out, forget the dinner, that’s a giant pre- and postparty that isn’t gonna happen. Well, I don’t know. They might. Nah, I guess if they’re pulling out they’re pulling out. They’re not gonna do the parties, either. New Yorker, big whoop. But if others come along and pull out, no concern of mine.

RUSH: It’s a color photo of Donald Trump through sniper crosshairs with the crosshairs at his temple, and the headline is: “Why not?” So the Village Voice has a cover advocating the assassination of the president of the United States. Der Spiegel in Germany has a cover of Trump having decapitated the Statue of Liberty and is holding it in his right hand with a knife he used to decapitate it in his left hand, the statue is bleeding.

Peggy Noonan, the headline to her column: Trump’s Washington, nothing seems stable, nothing feels stable. It’s not Trump’s Washington. Now, you remember when Gabby Giffords was shot in Arizona and they tried to blame it on Sarah Palin because on Sarah Palin’s website she had some graphic image of crosshairs or something or other. They tried to really say that the wacko that shot Gabby Giffords was inspired by Sarah Palin.

Now, everything that they’ve ever held up as a standard not to be done, as impolitic and as promoting violence, they are doing. You can’t have something more crystal clear than this. 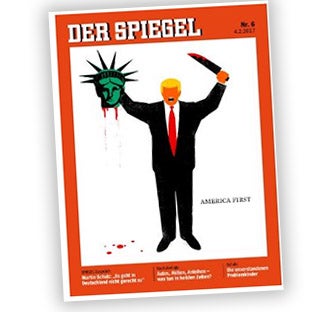 RUSH: By the way, I need to correct something. It’s not The Village Voice. It’s a magazine from Ireland called Village magazine, the magazine that has the close-up on Trump’s head with a sniper crosshairs aimed right at his left temple with the headline “Why not.” I mistakenly referred to that as a Village Voice cover. It’s not. It’s an Ireland magazine, and it’s called Village magazine. So anyway, it’s just really fraught with potential danger for the president and for everybody else.