The Truth About the Yemen Raid

RUSH: So, you know that Fox News hired Marie Harf. There. She’s on there right now. They hired her as an analyst. She was a spokeswoman that kept being demoted at the Obama State Department. Now she’s a full-fledged Fox analyst. I just saw a little bit of her analysis of what we’re doing vis-a-vis Iran, and she’s so concerned. (paraphrased) “It’s such an area of the world that’s in crisis, and I really don’t think that we should be conducting diplomacy by tweet.” I don’t know. It’s another one of these things, trying to keep up with all this that’s happening. 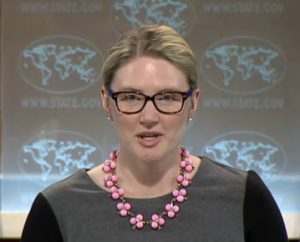 So I guess it must be okay, then. But this is the first I’ve heard. Again, it’s just not possible to keep up with everything, and it’s the first I’ve heard that the Trump people have admitted that this was not a violation of the nuke deal. If it wasn’t a violation of the nuclear deal, then the sanctions exist simply because they fired the missiles. We do have a destroyer that’s off the coast of Yemen. I mean, we’re ramping up. We are prepping to implement these sanctions, and there’s no question it’s an area of the world that’s in deep crisis.

But, for crying out loud, to have somebody on from an administration that just gunked everything up by hanging around and basically drawing all these meaningless red lines in the sand on Syria and Russia? Huffing and puffing and then not doing anything, and letting it be known that they would never do anything and we’re just being roughshod run over by whoever it is — ISIS, Al-Qaeda? Now one of the principle spokespeople for that policy is up passing judgment here on what’s going on?

You know, folks, there’s a… Are you familiar with this raid that happened, this raid on Al-Qaeda? There are a number of learned people who are of the opinion… This is where the Navy SEAL died in this commando raid, and it was on the Arabian Peninsula, and there are people who think that the Pentagon is trying to sabotage and undermine Trump. Remember, there’s Obama people left all over this bureaucracy, folks, including in the Pentagon. Do not make the mistake that the Pentagon is made up of people who want to kick ass.

You’ve got a lot of politically correct types in every Washington bureaucracy. You have warrior generals; you have the PC generals. You have the generals who want to climb the ladder of success after success on the battlefield and real victories, and you have others that don’t ever want to see battle, that don’t ever want to be in charge of battle. This operation was put in place during the Obama presidency, and like all military operations, the president does not draw these up. The president gives the go sign, the go order, but the president is not the military commander!

The military commander on the ground or in the Pentagon, wherever the planning takes place, devises the strategies. Trump is not a military commando leader, and there hasn’t been one of those since Eisenhower. Do you realize there has not been a president in the United States since Eisenhower who was qualified to actually plan commando raids like this? And they’re now trying to dump this off on Trump! The Pentagon has people trying to dump this off on Trump, that Trump’s ineptitude and his incompetence is behind this raid that went bad, and that’s not what happened at all.

This raid was drawn up and the details for it during the Obama administration, and the commandos on the ground — commando leader — wanted to go and then decided to wait because they needed a moonless night. So they needed a full moon — a new moon, rather. And there wasn’t going to be a new moon before Obama left office after the final plan was put to bed and decided it was operational. They needed a new moon, and the first new moon came after Trump was inaugurated. So Trump’s brought up to speed, and his team are shown the details of the plan, and he signs off on it.

During the raid, it was learned that their cover had been blown. During the raid, it was learned that the house, the building that they were to hit… Inside this building was a treasure trove of intel, possibly — cell phones, laptop computers, any number of things — that had we been able to get, it would have provided a treasure trove of intelligence data on Al-Qaeda. The commandos in the middle of the operation figured out early on that they were known. It was known by the enemy they were coming. They did not have stealth. They did not have the element of surprise.

Now, nobody’s pointing fingers yet as to how this happened. Right now, they’re chalking it up to the fact that the targets on the ground were able to hear the drones flying over and were able to hear the other military aircraft that were not flying high enough to disguise their sound. By the way, if you’re a militant Islamist in the Middle East, you know the sound of an American drone. If you can hear it, you know what it is. Normally they fly high enough that you’re not able to hear them. Something new happened in this operation they hadn’t seen before.

Young girls and women had taken up arms and were firing back. It was SEAL Team Six, the same team that killed bin Laden, that was assigned the task of this raid. It was in Yemen in the Arabian Peninsula. And all kinds of things went wrong. You haven’t heard much about this other than the fact that Trump went to Dover to greet the coffin of the SEAL Team Six member that came back who had died in the attack. But in the upper echelon there are leaks and all kinds of other stories that blamed Trump.

“Typical cowboy! Typical cowboy Trump.” None of it is true. Not a single word of it is true. Presidents do not… The last president that tried to engage in actual mission command was LBJ picking… Oh, I’m sorry! It was Obama, Obama picking drone targets, and LBJ picking targets in Vietnam, bombing targets. But this is not on Trump, what happened. And it would not have been on Obama. Things like this… Presidents understandably are gonna get the success or the blame when things like this happen.

But this mission should have been called off. The minute they found out they were compromised, the minute they found out that the targets knew we were headed for them, they should have pulled the plug and gone the other way. But the reason for this story is that now we’re doing sanctions on Iran, and the people… You have the State Department still, people at the Pentagon — there are all kinds of people — who still want to undermine Trump and engage in policy that will be shown as Trump failure.

We still find ourselves in a very dangerous time. It is a profoundly dangerous time because there are people with so much irrational hatred in opposition to Donald Trump that I don’t think they would blink at something that did real damage to America if it helped take out Trump. I think it’s the price they would be willing to pay. I think they’re so off their rockers now and unhinged and deranged.