RUSH: I’m minding my own business last night, and I get a heads-up that NewsBusters, our old buddy Brent Bozell and the gang, have come across a New York Times story. You won’t believe this. As many of you know before I started the EIB Network, I had a local talk show in Sacramento, California, my adopted hometown, on a 50,000 watt blowtorch radio station, KFBK.

The New York Times had a story this week blaming me and that show in Sacramento for the anti-immigrant attitude that existed in California during the 1980s when guys like Pete Wilson were being elected governor. That’s back in the days when the Republicans ran the state of California. Well, at least they were having governors elected. Willie Brown ran the state. But, nevertheless, I mean, how in the world…? Some woman named Emily Badger, and I looked her up. She couldn’t have been two years old when I was doing that show if she was even born. 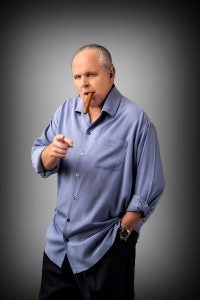 So how in the world do you end up…? Somebody out there probably had to throw my name around, one of the sources she talked to, but that’s… You know what it is? I’m their Darth Vader. I am their Bond villain. When they need a villain, when they need a face to plug into a story designed to scare and mobilize the left, they just do me whenever it fits. And so they’re trying to look at the changing attitudes about immigration in California and when did it stop being Republican racist, and it happened when I left.

Yeah, my presence… It was a local show in Sacramento. It was 50,000 watts, but it was way up there at 15-something hundred on the dial. I mean, it didn’t get much past Merced. Tony Coelho could listen to it; that’s about it, the fringes of the Bay Area. Yet they’re blaming me for the entire “anti-immigrant attitude” that existed in California in the eighties. But don’t misunderstand. I’ll gladly take it. I will wear the badge proudly. When these people need a villain, they automatically gravitate to me.