It’s Not Trump’s Washington Yet, Peggy!

RUSH: To Peggy Noonan’s piece. I’m not gonna get into the piece. I just want to bounce off the headline here. She has her Friday Wall Street Journal column, and the headline: “In Trump’s Washington, Nothing Feels Stable.” Well, it isn’t Trump’s Washington yet, by any measure. The establishment is still in charge of this town, folks. It’s one of the things that’s wrong with it.

Whose fault is it that nothing feels stable? What is stability, by the way? Let’s define stability. What does Peggy Noonan actually mean by stability when she says, “In Trump’s Washington, nothing seems stable.” What’s stable? Anybody want to take a stab what “stable” means? Snerdley said the usual processes. No, “stability” in Washington means the liberals are in clear control. The liberals are in charge. It means liberalism and the Democrat Party are operating it and owning and running it. That’s what “stability” means in Washington.

Whenever the liberals are defeated at the ballot box, whenever the Republicans hold positions of power, that is when it automatically becomes unstable in Washington. The only time Washington is stable is when there’s a Democrat in the White House. And when that doesn’t happen, then here come the stories about how everything’s unstable, we’re feeling nervous, we don’t know what’s gonna happen from one day to the next, and maybe even one hour to the next. It’s so unsettling, it’s so unsettling, and I just want things to be stable again.

But I keep saying, “This is what it looks like.” Washington, Hollywood, academia have been under the control of Democrats and leftists for generations. And any serious effort to take it back, to wrest control, is going to cause circumstances and situations exactly like we’re in. And here’s the thing: You can’t quit 25% of the way through it, halfway through it. Once a serious concerted effort is made to reassert control over our nation and the government, of course they’re gonna act like stuck pigs.

I understand the peer pressure and the public pressure brought to bear of what looks to be a media that represents a majority. All it takes is a single story claiming that Trump is the first president to fall below 50% approval in his first month in the history of the country. “Oh, no! Oh, no! They’re starting to hate Trump already.” All of this stuff is mind control. It’s all designed (as it always has been) to depress you, to dispirit you, to convince you that what you believe is wrong and in the minority, to convince you that what happened in November really didn’t happen, that it was a quirk, that it was the Russians, that it was cheating, that it was not real.

Anything they can do to upset the massive support base that Trump has — and it’s an ongoing effort, and it’s taking many different shapes and sizes in every day. This headline on Peggy Noonan’s column is just the latest example: “In Trump’s Washington, Nothing Seems Stable.” Is Berkeley stable? Is Berkeley where they’re blowing up things and throwing bricks and other things and potentially injuring people? Is that stability? Was the Women’s March on Washington after Trump’s inauguration? Is that what is meant by stability? 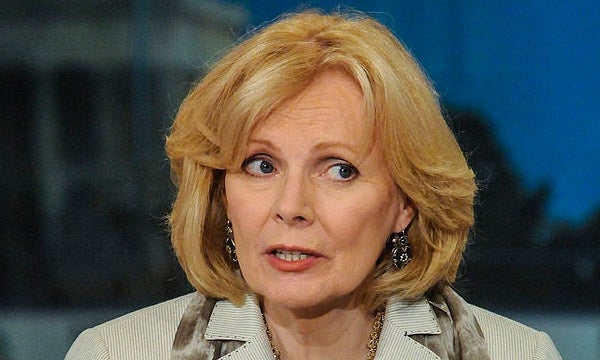 Was Madonna’s making a fool of herself talking about wanting to blow up the White House and Ashley Judd’s making an even bigger fool of herself? “I’m a nasty woman!” Meryl Streep talking about the power of her vagina, whatever it was? That’s stability? I haven’t read Peggy’s column, but the instability is not Donald Trump. Donald Trump is executing and implementing the mandate that he achieved by winning the election. If there’s any instability, then we’re seeing it on the part of the left. The entire Democrat agenda, if you ask me, is to promote instability — and the definition of stability is when the Democrats are controlling things.

It is purposefully destabilizing.

RUSH: I think what’s happening out there… I think what Peggy Noonan’s piece… I haven’t read the piece. I’m just bouncing off the headline. The headline’s all I needed, this business of, “In Trump’s Washington, Nothing Feels Stable.” I think Trump is responsible for one part of it. He’s just racing through things. I don’t think they can keep up. Did you hear the South Park guys, the guys who do the TV show South Park? They’ve said, “We are stopping involving Trump in our show.” They can’t keep up, because it takes so long to do animations.

“By the time we get something prepared, Trump’s long gone from it.” And the Drive-Bys can’t keep up. They prepare these hit pieces ready to go, and Trump’s off to something else, and they’re off balance, and that equals “unstable.” I hope Trump doesn’t fall prey to any of this. No indication yet that he is inclined to, but I hope he’s not in this to be loved, ’cause that is never gonna happen.