Follow the Money to Understand Collins, Murkowski Opposition to DeVos

RUSH: John Barrasso of Wyoming, another Republican committee chairman, just said (paraphrased), “To hell with you Democrats,” and they went ahead and confirmed, had a vote on the EPA nominee.

They did it. It’s done. And this is a great nominee for the EPA.

This is an absolute terrific guy. And the Democrats, just like yesterday, said, “We’re not showing up. We’re not showing up,” and the Republicans said, “Fine! If you’re not showing up, we’re gonna do the vote without you,” and they did it. Two days in a row! Orrin Hatch yesterday confirmed both Mnuchin at Treasury and pa pa pa pa pa… Mental block. What’s the other guy that was…? It was Tom Price at Health and Human Services. Those two were confirmed yesterday. Well, they passed out of committee and will go to the full Senate. 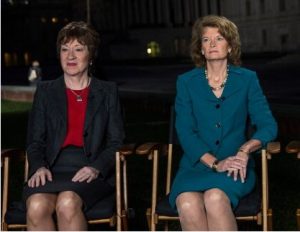 Both days, two days in a row, the Democrats refused to participate. The Republicans in the old days would have waited for the Democrats to, you know, finish whatever they were gonna do and show back up because the Republicans would have wanted to make it look like they were being fair and understanding and tolerant. But now? “Fine. You don’t want to show up? “We’ve learned a little bit more also about Susan Collins and Lisa Murkowski who have said they’re gonna vote against Betsy DeVos. We may have stumbled into one of the reasons why.

Apparently, they are both heavily funded by teachers unions. Apparently, both Collins and Murkowski receive significant funding — as in donations, as in contributions — from teachers unions and other related unions. I made the point the other day that it’s not always Republican cowardice that causes them to appear to be betraying the party cause, in many cases — and it’s not fear of the media. Not alone. It oftentimes is their paymasters, who it is that’s donating to them that dictate how they vote and comment.