RUSH: Can I predict something else that’s gonna happen to you? Not to you. Super Bowl media day. Is it still tomorrow or is it tonight? You know, I think they’ve turned media day into a prime-time thing. It used to be on Tuesday, the players’ day off. Anyway, it doesn’t matter when it is. Tom Brady is going to get variations on one question, and that question is, “What the hell are you doing supporting Trump? What the hell are you doing being a friend of Trump? Who the hell do you think you are? Do you realize the absolute damage you have helped cause by supporting Trump? How in the name of Sam Hill could you be supporting Trump?”

That’s gonna be the predominant question Tom Brady gets. No, they won’t ask him about inflated footballs. They might ask him, “Can you wait to stick it to the commissioner if you get the MVP and he has to give you the award?” They’ll ask the same question of Belichick and they’ll ask the same question of Robert Kraft, the owner. “How the hell, how the hell coming from New England, Massachusetts, how in the hell can you be Trump supporters?”

And right here, right here it is, headline, USA Today: “Tom Brady Has Some Explaining to Do on Donald Trump.” Nancy Armour writing at USA Today, and it opens this way. “Tom Brady no longer gets a pass on his friendship with Donald Trump. Not after this weekend, when the country boiled over in rage –” No, it didn’t. The country did not boil over in rage. This is my complete point. A bunch of leftists who were primed and organized and waiting for marching orders, this was not organic, it was not spontaneous.

They make it look like it is, but it isn’t. These people have been part of the plan to resist Trump from before he was inaugurated. This was an event they have been waiting for. There will be many others. But, see, this is how it’s done. Tom Brady no longer gets a pass. What business is it of yours, Ms. Armour, who his friends are? I’ll bet he has a lot of friends you wouldn’t like. What business is it of any of these sportswriters who Tom Brady’s friends are?

And can you believe the gall of writing that Brady, especially “not after this weekend when the country boiled over in rage and indignation at Trump’s decision to turn America’s back on refugees.” That isn’t what happened. We didn’t turn our back on refugees. We implemented a vetting program exactly like Trump says.

See, folks, do not be afraid of this stuff. You need to be properly outraged and just as equally mobilized by it. This is the kind of stuff Steve Bannon was talking about when he says the media is the opposition party. Tom Brady is showing up as a future Hall of Fame quarterback going for a record fifth Super Bowl title. He happens to be I think inarguably the best quarterback in the National Football League, and the sports media now claims that Brady has some explaining to do.

He no longer gets a pass on this, not after this weekend. It further says here that Brady “can expect to get some tough questions about Trump. As well he should.” What did Brady have to do with the policy? And why don’t you people stop mischaracterizing this policy? This policy, this executive order, is and was legal. And it isn’t and wasn’t the way you have portrayed it. It was not a Muslim ban. We did not turn our back on refugees, for crying out loud. 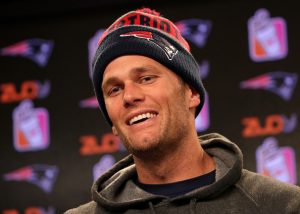 (disgusted sigh) I mean, this story makes every point that I’ve tried to make today, about how they create this illusion that they are the majority, that everybody agrees with them. “Not after this weekend, when the country boiled over in rage…” Ms. Armour, I don’t know where you live, but in many parts of this country where you don’t live and probably have never been, there wasn’t any rage, and it certainly didn’t boil over. You need to stop thinking the world goes around you. You need to stop thinking that the sun and the world orbit you and your media buddies.

Poor Brady. Nah, this stuff, I’m sure it makes him nervous. He doesn’t… In his business, in his field he’s reached the pinnacle. He’s going for an achievement that nobody else has: Five Super Bowls. Bradshaw and Montana have four. He’s been to Super Bowls recently, but they’ve lost. This may be his last. He’s 39 years old. Now he’s getting peppered with this kind of stuff all because there was a Make America Great Hat in thinks locker. Brady didn’t come out. He didn’t join the campaign trail with Trump. He hasn’t endorsed Trump. He didn’t do any of this sort of stuff.

This is what they do to you.