RUSH: Hey, folks, how are you? It’s great to have you here. And we’ve got another three hours of broadcast excellence headed your way, unpredictable, all-knowing, flexible and flowing. Whatever happens, we’re ready for it, and things are happening at a rapid pace.

I’d like to welcome you to the EIB Network. Since I am America’s Real Anchorman, this is the home of the real alternative facts — and, in fact, that’s probably a good way of identifying what we do here. There’s the Drive-By Media with their agenda and their lies, and we set the record straight on a daily basis. You know, they’re up in arms here, the Drive-Bys are, over this “alternative facts” business from Kellyanne Conway with F. Chuck Todd on Meet the Press. And the media doesn’t believe there can be any such thing as “alternative facts.”

Well, who do the Drive-Bys want to be determining what the facts are? They want themselves to be determining what the facts are. But, if you look at CNN, CNN’s still chasing the Malaysian airplane! CNN’s got a guy, Don Lemon, who thinks that a black hole might have swallowed it up. I’m sure there’s nobody else at any other network that thinks that. Does that mean we get rid of Don Lemon because he had an alternative theory versus alternative facts, or do we want the diversity that many varied news sources provide? 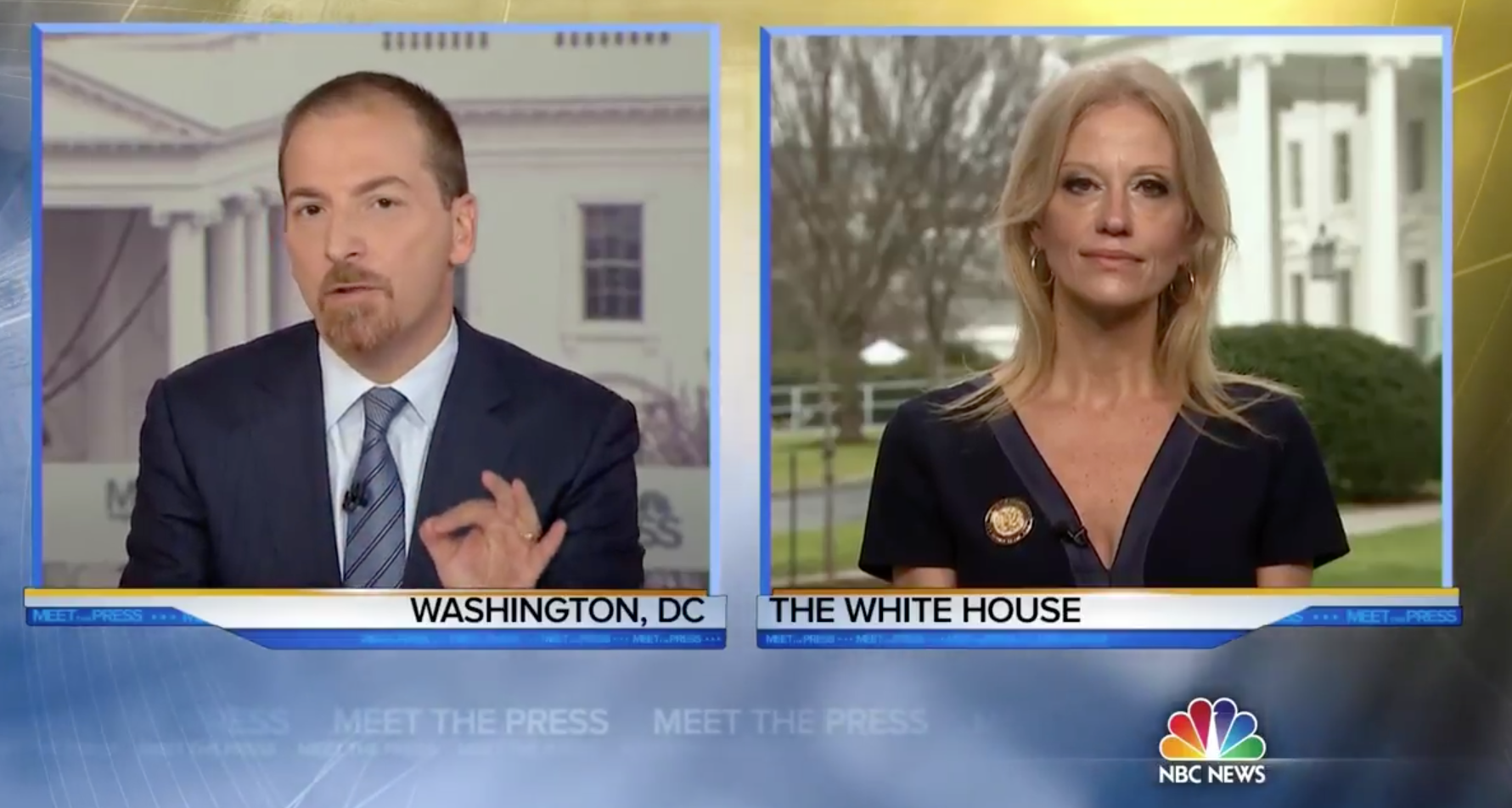 Now, Obama would have loved a single government ticker — and, for the most part, had one. But now that’s all different. And, by the way, there’s a reason why the Drive-Bys focus on this alternative fact business. Even though it was Kellyanne Conway who created the term and used it to explain to F. Chuck Todd why they see things differently in the Trump administration and the way they see things at NBC, for example. Trump’s comments on voter fraud — which, by the way, this is delicious. I cannot wait to provide you details of this, what’s really going on with this, in just a mere moment or two.

Now, the Drive-Bys/the mainstream media focus on these minor little nitpicks where they can spend time of accusing Trump of lying or accusing Trump of insecurity or accusing Trump of having a thin skin. They spend all of their time doing that instead of reporting what Trump is actually doing, which is one heck of a lot: Executive orders freezing government hiring, freezing government grants, building the wall. It’s incredible. Last night, there were three Trump tweets. First one: “Big day planned on NATIONAL SECURITY tomorrow. Among many other things, we will build the wall!”

Then the next tweet: “If Chicago doesn’t fix the horrible ‘carnage’ going on, 228 shootings in 2017 with 42 killings (up 24% from 2016), I will send in the Feds!” (laughing) Imagine the heads exploding as the Drive-Bys read this stuff! “I will send in the Feds!” Who are the Feds? Well, the Feds, in this case, I assume would be the FBI. But here’s the thing. What has the Obama administration been doing to every police department it could get its hands on the last eight years? They’ve been sending in the Feds — and the Drive-Bys applauded it!

This is a president of the United States doing this! Can you see the heads exploding out there? It’s delicious. And then they started reacting to all of these tweets, and they were not happy about it. Let’s see. Here is — da-da-da-da-da-da — one from Robert Costa, who is, of course, at the Washington Post reacting to all of this. Let’s see. “Confirmed… first reported New York Times, the start of border wall project will be one of orders signed by Trump on Wednesday.” Wait a minute. I thought Trump was just yapping his gums about all this stuff. I thought, “Trump isn’t gonna do any of this!

“Trump Moving Forward With Border Wall, Weighs Refugee Cuts — President Donald Trump will begin rolling out executive orders on immigration today beginning with steps to build his wall along the US-Mexico border, according to two administration officials. He is also expected to target so-called sanctuary cities and is reviewing proposals that would restrict the flow of refugees to the United States.” Now, wait just a second, ’cause I distinctly recall the Drive-Bys and the pundits all telling us over and over again that none of this was ever really gonna happen.

That Trump’s a novice, and when he gets to Washington — if he ever gets there — and if he gets into office, he’s gonna find out that he just can’t do this stuff. It’s just not the kind of stuff a president can walk in and do. He’s gonna have opposition on Capitol Hill! The American people are not gonna put up with any of this (even though they elected him). They said that Trump’s campaign promises were just pipe dreams. In fact, the building of the wall was supposed to be even more impossible than Trump getting elected. So they are still…

“This means the market’s gonna crash. Investors aren’t gonna want any part of this, and they’re all gonna bail. It’s gonna be bad! Wall Street, Main Street? Oh, my God,” said Krugman, “it’s just horrible.” He’s not been right about anything in I don’t know how long. So we’ve got the Dow Jones Industrial Average (NASDAQ as well) skyrocketing. Trump’s approval numbers are skyrocketing. The media continues to try to take him out (which is what they trying to do) in the ways of the past, the way they’ve always been able to take out primarily Republicans.

But if there was ever a Democrat or liberal that needed to be taken out, they were able to do that, too. But they’re not able to do it with Trump. It’s all backfiring. Everything that they think is gonna nail the guy or cause his supporters to get mad and abandon him, it’s the exact opposite. You know, a classic illustration of this, ladies and gentlemen? Remember the press conference yesterday? We highlighted this, spent many, many minutes talking to you about this. Sean Spicer doing the press briefing, and the previous night Trump had once again alluded to the fact that there had been some number of millions of illegal aliens or whatever voting.

And, of course, that’s a dog whistle the media. When they hear that, they go batty, because the last thing in the world they want is for anything like that to be true. So all during the press conference yesterday, first Cecilia Vega at ABC News, and then Mara Liasson picking it up at NPR. “Well, if it’s that bad — if it’s that bad — why don’t you conduct an investigation? I mean, this is a serious, serious scandal. If that really happened, if there are two million, three million, if there were five million illegals who voted, that is a real scandal. Where is the evidence? Why don’t you investigate?” 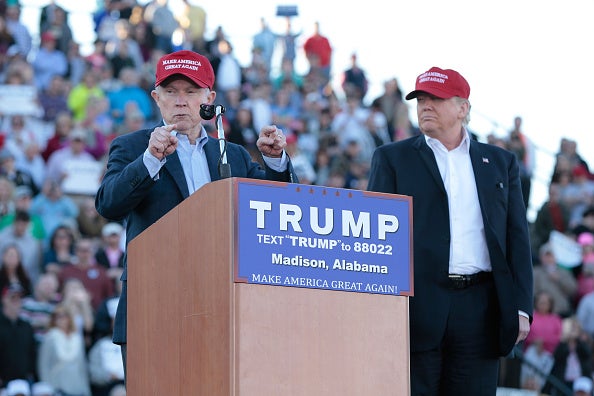 The Trump administration has announced that they are going to investigate using Jeff Sessions at the Department of Justice. “Trump Promises ‘Major Investigation’ of Voter Fraud in 2016 Election.” Here is the way the AP reports this. Once again, Julie Pace: “Donald Trump holds the most powerful office in the world. But he’s dogged by insecurity over his loss of the popular vote in the election and a persistent frustration that the legitimacy of his presidency is being challenged by Democrats and the media, aides and associates say.”

Now, that is a preposterous headline. The headline actually: “Donald Trump Dogged by Insecurity Over Popular Vote, Media Coverage.” It is a preposterous headline and lede, even by the AP’s standards, because now they’re getting into psychoanalysis. “Trump’s fixation has been a drag on the momentum of his opening days in office, with his exaggerations about inauguration crowds and false assertions about illegal balloting intruding on advisers’ plans to launch his presidency with a flurry of actions on the economy.”

So what we’re led to believe here is that Trump is so insecure that when the media runs around and keeps talking about how Hillary won the popular vote that he loses his mind and he gets mad and starts stomping around the Oval Office demanding that somebody go out there and fix it, that the media’s lying about him. “I won, and I won big, and if illegals had not voted I would have won even bigger.” The AP says that Trump’s aides cringe each time he goes there. They cringe every time he brings this up.

Because they want to continue with the announcement of all the policy initiatives, the major changes that are coming, and it’s all being sidetracked by this kind of stuff. I think they’re missing it entirely. I don’t know about Trump’s insecurity. I don’t think it matters, because I don’t think that’s what’s driving this. I think there are people who really believe it. We have reported on it a couple of different times. I went back to the archives of all the show prep in the last number of years and found a couple of salient stories that we’ve used to highlight the idea that there is massive voter fraud going on.

I will share them with you here in a the moment. But while Trump supposedly is dominated by his insecurities, the press says, “Well, where’s investigation? (stammering) Wuh wuh wuh?” Okay, you want an investigation? We’re gonna get investigation. Now, the tables are turned because the left does not want such an investigation. After all, any such voter fraud is gonna end up — if they find any, it’s gonna be tagged right on them. They don’t want any part of this be with they never thought Trump would do this. “Well, where’s the investigation if it’s so bad?”

Okay, you want an investigation? I’ll put my main man Jeff Sessions on it. By the way, another tweet from Robert Costa at the Washington Post, who says that insiders in the Trump administration say the most relevant and powerful member of Trump’s team right now is Jeff Sessions, the attorney general. So with Trump’s announcement that he’s gonna investigate this voter fraud… Make no mistake: There is voter fraud all over this country. Now, we don’t know if it’s millions and if it’s illegals, but there is voter fraud all over the place. And if Trump’s gonna investigate it, it’s gonna be found.

And I’m telling you, to whatever the degree the Democrats are engaging in it, they don’t want it uncovered and so they are now doing their best to besmirch and impugn the whole idea. But they asked for it. Now while they’re running around saying Trump’s insecurity is driving him to do this, I think it’s pretty smart strategically and politically because it’s now got ’em all… They’re not talking about Russia at the moment and they’re not talking about crowd size. Now all of a sudden voter fraud is front and center — and believe me, it is. It always has been.

John Fund in the National Review and books that he’s written has found incredible evidence of massive amounts of vote for, and the vast margin of it takes place in Democrat strongholds. And it hasn’t stopped him from doing anything else. He’s still signed the executive orders on the wall, executive orders on shutting down the EPA. Well, not shutting it down, but really… There’s all kinds of stuff. We have the Trans-Pacific Partnership. We have the unions. The auto execs came in to see Trump, and they left the meeting overwhelmingly impressed and said so. So it’s not that Trump is sidetracking himself and putting up roadblocks for himself. He’s doing all of this at a pace everybody in Washington always told us was not possible.