RUSH: Now, here’s another example of how the Drive-Bys do their jobs and take advantage of the relative ignorance (that’s not a comment on intelligence) of low-information voters. Again, ABC News. And the headline: “Majority of Promised Oil Pipeline Jobs Will Be Temporary.” So you see the headline and you’re a Millennial, you’re a low-information voter — you’re looking for videos to watch, looking for the latest on Elon Musk or whatever — and you find that headline. You say, “My God, Trump’s a liar! My God, ‘temporary’? Trump’s been bragging about the pipeline and all these jobs coming back? 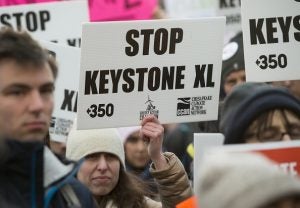 We see the Democrats don’t understand The First Rule of Holes. They dug themselves into a deep hole, and in trying to get out they’re digging themselves in even deeper. This is what blind partisanship looks like. Working Americans can see it clearly. Everybody in the construction industry knows that every construction job is temporary! In other words, there’s no news here, and there wouldn’t be anywhere near this kind of a story associated with any initiative of Barack Obama or the Democrat Party.

The difference is when Obama was promising all these “shovel-ready jobs” and “infrastructure rebuild,” we never even got a list of projects! Do you know the Trump administration has already released a list of the first infrastructure jobs that are going to be taking place? It’s $137 billion or $157 billion has already been assigned, and one of them is modernizing the terminal at the Kansas City airport. There’s gonna be a new tunnel somewhere. But the jobs are specified, the costs are specified. We never got anything of the sort with Obama because there never was any infrastructure repair. Obama’s stimulus money went to union workers, primarily teachers and union bosses who turned around and gave some of the money back to the Democrat Party.

It was a money-laundering operation, essentially. But Obama couldn’t list any infrastructure projects ’cause there weren’t any. But even if there had been, the media would never have run a story saying that the jobs were just temporary. In fact, most of the jobs created under the Obama administration were part time — in its own way, a definition of “temporary.” Most of Obama’s jobs that were created were part time, and that’s ’cause Obamacare cost employers a hand and a leg if they wanted to full-time employ people. So they got around the Obamacare costs by hiring more and more people part time, under 30 hours a week.

We would have never — we never did — get a story about any Obama job being temporary, any Obama recovery story being halfhearted, or half-baked, or what have you. But this is how it’s reported, and it’s a very, very long story. It’s a story about the Keystone pipeline and the Dakota pipeline. “Majority of Promised Dakota, Keystone Pipeline Jobs Expected to Be Temporary.” They’re all temporary in the construction business. Every one of them! Except for the people that own the construction company, and then even for them the work is temporary ’cause the job finishes. It completes at some point.