RUSH: This John Lewis business, Trump… I’m telling you, folks, the guy… They just can’t intimidate him, they can’t scare him, they can’t shut him up. He’s back tweeting about John Lewis. Now, you would think that after the press barrage of the last couple of days their effort to shame Trump for, “How dare you attack this man who was beat up on the Pettus Bridge in Selma 50 years ago? How dare you attack him! How dare you?” Trying to shame Trump. “You attack John Lewis, civil rights icon?” So Trump tweets out, “John Lewis lied. He said mine is the first inauguration he’s not gonna attend.

“He didn’t attend the George W. Bush inauguration. John Lewis lied.” Can you say the media is having a cow? My gosh, “Trump doubled down on it!” And the John Lewis office had put out a statement: Yes, that’s true. Congressman Lewis did boycott the inauguration of George W. Bush because he also didn’t think that election was legitimate. Trump was right. So this is the Trump pattern. Do something, the press has a cow, and Trump doubles down. He doubled down. And then, do you know he had a meeting yesterday with Martin Luther King’s son at Trump Tower?

Yeah, beat upside the head, 50 years ago on the Edmund Pettus Bridge in Selma, by a bunch of Democrats. Bull Connor. It was Democrats who turned the fire hoses on John Lewis. It was the Democrats that beat John Lewis upside the head. It was Democrats turned the dogs loose on the protesters. It was the Democrats that made up the KKK and still do. Trump prays with Martin Luther King son to heal the nation. “President-elect Makes Peace Move After Spat with Civil Rights Icon John Lewis.” Oh! 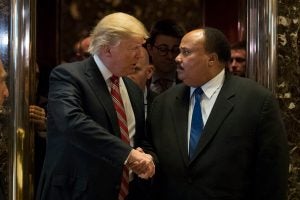 We’re led to believe that the only reason Martin Luther King III showed up was so that Trump could play CYA with him after the John Lewis flap. That’s not what happened here. Martin Luther King III was scheduled to visit Trump anyway. The media is just choosing to present this as Trump trying to cover his rear end. “President-Elect Donald Trump prayed with son of Martin Luther King Jr. at Trump Tower on Monday just days after the president-elect went after civil rights icon John Lewis on Twitter as someone who was all…”

See, “civil rights icon” Trump “went after…” By the way, Trump called him “all talk.” What is Lewis but all…? What has Lewis done in the last 50 years besides talk? (interruption) No, no. I mean besides be beaten upside the head, what has he done in the last 50 years since then? He’s done nothing but talk. He’s become a Democrat Party hack. Now, you’re not supposed to say this, folks. You are not. Nobody is supposed to say things like that, but that’s what he is. Yeah… (interruption) He’s the conscience of the civil rights movement in Congress? That’s…?

Okay. Fine. (sigh) Anyway, “Trump ‘prayed with Martin Luther King III & discussed the legacy & work of his father … A source who was at the meeting said it had opened with a prayer about ‘healing the nation’, the Washington Post reported. The prayer and reflection came on a day when Trump hailed the ‘wonderful things’ that King stood for — following a nasty online spat with civil [sic] Lewis,” who was beaten on a bridge 50 years ago, and “who is skipping Trump’s inauguration after saying his election was ‘not legitimate.'”

Lewis, by the way, made a big deal out of the fact this was the first inauguration he was gonna miss, the very first one. He did. That’s how bad Trump is. And then Trump said, “No, no. You lied. You didn’t go to George W. Bush’s, either.” And they caught him. You hear Rod Schneider, Saturday Night Live actor, comedian, the movie character named Deuce Bigelow? Have you seen that movie Deuce Bigelow? Years and years ago. It’s like one of those Adam Sandler movies like the golf one. I’m having a mental block on the name of the movie.

(interruption) No, no, no, Caddy Shack, that’s Bill Murray, Bill Murray and the badger. This is… I can’t remember what it’s called. Anyway, it’s that kind of mindless just-humor filled slapstick kind of comedy, and Rob Schneider tweeted to John Lewis, and I’m gonna read to you. This is the New York Daily News. The media is just savaging Schneider. They’re just savaging him. He has no right to do what he did! He has no right to even talk to John Lewis, ’cause you know what he did? He preached and he deigned to teach John Lewis how to do something.

And nobody teaches John Lewis thing. John Lewis teaches! John Lewis is the conscience. John Lewis is this or that. “Rep. Lewis,” begins the tweet from Rob Schneider. “You are a great person. But Dr. King didn’t give in to his anger or his hurt. That is how he accomplished & won Civil Rights.” The New York Daily News says, “The ill-advised comment came just days after a disagreement between Lewis,” who was beat up on the bridge 50 years ago, “and President-elect Donald Trump. The Georgia Democrat announced Friday that he wouldn’t attend Trump’s inauguration, saying he doesn’t see this President-elect as a legitimate president.'”

So what’s wrong with this tweet? “Rep. Lewis. You are a great person. But Dr. King didn’t give in to his anger or his hurt. That is how he accomplished & won Civil Rights.” I’m telling you, the left-wing community is just descended on Schneider and accused him of impertinence, ill-advised commentary, insulting behavior. “How dare he say this to the civil rights icon! Rob Schneider doesn’t know the first thing about civil rights and discrimination and Martin Luther King compared to John Lewis.”

I think what this indicates… You know what nobody is saying? There’s an angle of this story that nobody is actually touching on. Let me just ask you, how many Democrats…? (interruption) No, seriously. How many Democrats have you heard about or seen or read about signing on with John Lewis on this? You haven’t seen a lot of people join whatever crusade Lewis is on.

He’s out there by some with in the media, but you don’t have a lot of Democrats joining him in this. And it’s a telltale sign to me. Now, media, they’re not covering that aspect of it, so you may not have even thought of it. But I look at things this way: Lewis comes out, calls Trump illegitimate. I mean, you would think that all of Hollywood would sign on and agree with it, and then Lewis would be on all the talk show saying it and then other Democrats in Washington would come out and echo it. Not happening. Not happening.

The only reason I ask this is because I saw a graphic on Fox earlier today, and I don’t know who said this, but — and I may get — it was something along the lines that the NAACP should have no white members or the DNC should not have a white… (interruption) That’s right. It was some liberal Democrat saying the Democrat National Committee should not have any white people in leadership.  That’s what it was.  So that’s why I’m asking.  Could it be the Congressional Black Caucasians are just not yet ready for a white president?  Here’s the montage…

MAXINE WATERS: (outdoor noise) I won’t be a part of a ceremony or an activity that makes people think we’re all together when we’re not.

JOHN LEWIS: (whispering) I don’t see this president-elect as a legitimate president. I don’t plan to attend the inauguration.

BARBARA LEE: I don’t want to celebrate, y’know, a president-elect coming in that campaigned on a campaign of bigotry.

RUSH:  That’s Barbara Lee from California, noted communist, Maxine Waters (may as well be communist) from LA, and of course John Lewis.  And here’s John Lewis, Meet the Press, F. Chuck Todd.  This is the lie he was caught in.

LEWIS:  I don’t plan to attend the inauguration.  It would be the first one that I miss since I’ve been in the Congress.

RUSH:  That’s how important it is: “The first one I miss since I’ve been in the Congress.”  But it’s not.  He boycotted George W. Bush because he didn’t think that election was legitimate, either. Trump tweeted that out that John Lewis was a liar. (chuckling) I love it.  I do.  I mentioned this yesterday.  This is John Lewis. It was March 31, 1995, during the budget battle, school lunch cuts that didn’t exist and all this, these phantom school lunch cuts. Republicans were gonna starve our children.  That’s what the Democrats said, “Republicans are gonna starve the children!” Kids are writing letters to Republican congressmen, “I can’t learn when I’m hungry! How can you take away our lunch? How can you do this?”  All sponsored.  And this was Lewis on the House floor during the school lunch debate…

RUSH:  Eh, let’s hear that again.  I mean, it kind of went by there real fast here.  John Lewis, civil rights icon, beat upside the head on the Edmund Pettus Bridge in Selma 50 years ago.  This is on the floor of the House, March 31, 1995, during the school lunch debate in which the Democrats were alleging that the Republicans wanted to starve America’s school kids.