RUSH:  Hey, hey, calm down out there, folks.  Everything’s cool, everything’s fine, no need to panic.  The Drive-Bys are in panic.  You gotta look at ’em as Wile E. Coyote.  Gotta look at Trump and his team as the Road Runner.  Wile E. Coyote still has no idea what’s happening.  They’re trying to continue to destroy Trump in the age-old ways they’ve succeeded.  It’s all backfiring on ’em.  I’m gonna explain this as the program unfolds.  Be cool.

RUSH:  Don’t worry about it, Rachel, don’t worry about any of this stuff.  Well, I mean, if you want to worry about it, go ahead, but I’m gonna explain it to you. It is fascinating to watch this, folks. I’m having more fun than a human being should be allowed to have watching this stuff go down. I mean, look what’s happening out there.

The media is obsessing.  They’re celebrating.  They want to pop the cork on the champagne because they claim that Trump’s cabinet picks are running away from him. “As they testify in their confirmation hearings, Trump cabinet picks break with Trump on campaign promises.”  And so what they’re trying to say is these guys are undercutting Trump, they’re selling Trump out, they’re proving that Trump lied on the campaign trail.

That’s not what is happening, folks.  The Drive-Bys and the Democrats basically, I mean, they, oh, they just want that to be true, but that’s not what’s going on out there at all.  I’m here to explain it.  Last night I’m watching, and this is hit or miss with me because I don’t normally watch cable news much anymore.  It’s nothing against it, I just don’t.  And last night I’m watching the first hour of Special Report with Bret Baier, and they had two panel segments, the Fox All Stars.

We can’t?  You ever heard of Barack Obama?  You ever heard of Solyndra?  For crying out, can’t pick winners and losers, fine and dandy, but where was all this when Obama was doing it?  But, anyway, that’s not even what’s happening.  What this was about — I gotta dial this down.  I’m getting too passionate, right, Rachel?

Can you believe it?  Who does she think she is?  And so you know what happened?  A bunch of leftist bullies, this pajama-clad bunch of invisible neophytes out on the internet started bullying her and demanding that people stop shopping at L.L. Bean.  In other words, they were encouraging a boycott because somebody there had the audacity to donate to Trump.

And so Trump praised her, and Trump thanked her for her support.  And everybody said, “Trump can’t do that, presidents can’t do that.  You can’t pick winners and losers like that.”  This has nothing to do with picking winners and losers.  This is defending somebody who supported him against an all-out bullying assault that I am intimately aware of and a lot of people are in the way this whole thing works, we have uncovered it.  We know who these people are.

They’re about 10 people and they make themselves out via algorithms to look like they are thousands of people, and they end up writing letters to businesses that make it look like they’re coming from the city the business is located.  The whole thing is a scam and we have uncovered it and we’ve identified the people.  And they’re trying this on L.L. Bean now.

So Trump, who is loyal, simply praised her. I think he even did a photo-op with her or something, and it was basically fighting back against a typical leftist.  If it were up to me these people would be gone after in court for violation of tortious — or tortious interference or whatever.  These are anti-capitalist, invisible bullies out there demanding that every other sniveling little leftist join their stupid little boycotts.

Fine and dandy, freedom of speech, do what you want, but to say that we can’t fight back, to say that fighting back is picking winners and losers.  Trump’s not picking L.L. Bean over anybody else.  He’s simply fighting back, which is what we have been missing for the last eight years.  And you can see how much the left hates it.

You can even see how much establishment Republicans hate it, ’cause they were joining this refrain that Trump can’t pick winners and losers. “We can’t do that. This is unseemly. He’s got to stop tweeting.  Presidents can’t tweet like this.  Presidents can’t do this. This is beneath the dignity of the office.”  You people, I’m telling you, you still do not understand what you’re up against here.

You know what?  Let me ask you a question, Rachel.  Would you be upset if Trump painted the Trump logo on the tail of Air Force One?  You wouldn’t be bothered?  What if Trump tried to rename the capitol building the Donald J. Trump United States Capitol, would that bother you?  The Donald J. Trump Senate Chamber.  (laughing)  I tell you, we can’t pick winners and losers.

And then all over the internet on liberal websites there’s another theme out there today based on Trump’s press conference where he called CNN fake news and refused to call on Jim Acosta. There’s a unified assault on Trump from the left wing of the internet, and it goes like this.

I’m not kidding you.  Wait ’til you hear this.  They are still claiming that the election was fraudulent, that the polling was right, and therefore Hillary should be president.  And I’m not making this up.  Robby Mook, the campaign manager, and a spokesman for Hillary are still saying the polls, the preelection polls and the exit polls, that’s where the truth of this election was, and the votes didn’t match up with the preelection polls and the exit polls and that means the Russians stole the election for Trump — and they’re dead serious.

Now, what does all this mean?  Well, I’m just gonna tell you.  What it really all means is that you should prepare yourself for the fact that they’re not gonna stop until they destroy Donald Trump either by way of impeachment — they don’t have the votes for that.  They don’t have anywhere near the votes.  They can’t… You know, the way impeachment works, you need two-thirds. The House of Representatives charges and then the House Senate conducts the trial and the vote, and they don’t have anywhere near the votes unless they get a bunch of recalcitrant Republicans to go along with ’em.

Which reminds me of the health care.  That’s another thing.  The left is in sheer panic over health care.  Oh!  One other thing.  I need to go back to this bus… Well, I’ll get back to it.  The cabinet picks supposedly saying during their confirmation hearings things totally at variance of what Trump promised during the campaign.  Ben Carson is a classic example.  They’re up there asking Ben Carson, “Are you gonna protect the HUD budget? You better damn well better protect the HUD budget! You know how important the HUD budget is? Are you gonna protect it?” 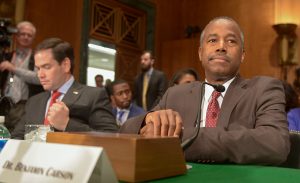 What’s Carson gonna say?  “No, Senator. You know what I intend?  I intend to wipe out this agency! I’m secretly here to blow HUD up.”  If that’s the case, do you think he would tell them that?  We have an entirely different audience.  Trump campaigns to the voters. He says what he says; he believes it. They elected him. Okay, here come he’s nominees.  Who’s the audience?  A bunch of establishment politicians that hate Donald Trump, both parties.  And so these nominees are up there, “So, Dr. Carson, are you prepared to protect the HUD budget?”

And Carson says, “Not only am I prepared to protect it, I may even find a way to expand it.”

They haven’t got the slightest idea that the guy is running rings around them in terms of strategy, tactics, and intelligence.  It’s amazing, the hubris and the arrogance of these people.  They’ve got their desires, their preconceived wishes and notions.  They have their narratives.  Trump is an idiot, Trump’s a liar, Trump doesn’t know what he’s doing. And so here come his nominees singing different tunes from what Trump did, and to these guys in the Beltway, the media, this is evidence. This is evidence that not even Trump’s nominees like him. 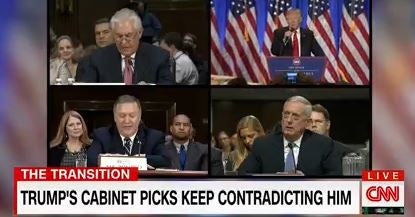 It’s incredible.  “Mattis and Tillerson, they’re telling everybody what an idiot Trump is and how dangerous Trump is!” You really think that’s what’s happening here, you media people?  If you need to get the votes of (for all intents and purposes) communist leftists on some of these committees, I mean, what are you gonna do?  This is a, “Yes, sir. Yes, sir. Three bags full” circumstance.  I can’t be the only one who knows this.  I cannot be the only one who knows this, the L.L. Bean thing. What else do we have? 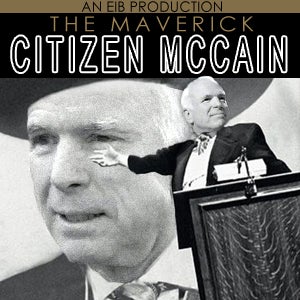 Oh, folks this dossier, this 35-page dossier that contained all of this total BS about Trump hiring prostitutes to do golden showers on the bed where Obama and Michelle (My Belle) had previously slept in Moscow? Remember we had McCain out there (impression), “Yeah, I just… I saw it.  I said, ‘This this is horrible!’ I — I didn’t know what to do! (stammering) So I put on my citizen cap and I gave it to the FBI. And so I did, and I backed off. I gave it to the FBI! I said… I said, ‘The intelligence people have to see this.'”  You know what happened?

Here’s the short version with details coming up.  McCain found out about this while in Canada and flew one of his aides to the U.K. to pick the document up.  McCain’s fingerprints are on this from the get-go.  He heard about the document existing from a member of the foreign agency, foreign office in the U.K., and he actually sent an aide of his on a special flight to pick this dossier up and bring it back to the United States.  I have details on that coming up.

Would you like to…? Do you know who’s gonna who’s gonna give the oath of office to Mike Pence? Have you heard that?  Clarence Thomas.  Supreme Court justice…  Ah, ah, ah, ah, ah, ah, ah.  I want to read to you the Reuters account of this.  Reuters.  Here’s the headline:  “U.S. VP-Elect Pence to Be …”  Oh, did you see that Obama gave Biden a participation medal yesterday?  Did you see that? (interruption) With Biden standing there and Obama’s announcing the presidential medal of what?  Servitude?  Whatever it is. I call it participation medal.

So Biden’s standing there waiting for Obama to name the next recipient. It turns out to be Biden! Biden grabs his handkerchief, turns around, starts crying, walks back, standing O, accepts it.  I bet it wasn’t surprise.  Anyway, here is the Reuters headline: “U.S. VP-Elect Pence to Be Sworn in by Conservative Justice Thomas.”  You want to hear the first paragraph of the story?  “Vice-President-Elect Mike Pence will be sworn in to office on January 20th by U.S. Supreme Court Justice Clarence Thomas, a conservative legal icon reviled by many liberals.”

You know, we should be used to this crap by now, but it still irritates when you run into it.  That’s the Reuters lede in the story that Clarence Thomas will be swearing in Mike Pence on January 20th.  Yeah, here, Politico. “Trump’s Inauguration to Shatter Washington Norms.”  I’m telling you, this is a theme that the left is concocting.  It’s all over my tech blogs! The tech blog little Millennial leftists out there are all worried about these norms and these protocols and these decades-old manners of civility of just being blown to smithereens by this barbarian Trump.  You can practically read the tears as they write about this.

So, folks, that’s just setting the table.  That’s just a preview of what is to come here to Open Line Friday.