RUSH: I need to inform you that we have redesigned RushLimbaugh.com, and we’ve been working on it during my absence, particularly the past week. None of the guest hosts — and, by the way, thanks a million to all the guest hosts for giving up their free time and coming in here and hosting the program. We’re so grateful. I thank them so much. I wouldn’t be able to leave if they weren’t able to come in here and accept the 25 grand a day that we pay — oh, wait, no, that’s for something else. But, still, it’s significant, and I do appreciate them coming in.

We had to do something about RushLimbaugh.com. It started to look like the penny saver, and you couldn’t distinguish the penile extension ads from the content. And I said, “This just cannot go on. We’re gonna have to just stop this. Really, I don’t know what I’m looking at here.” It just got more cluttered and cluttered and cluttered. 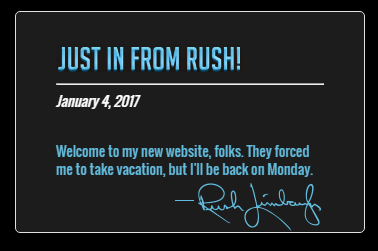 We’ve been working on this for a year, folks. We were supposed to roll this out — if I tell you what all’s involved here you wouldn’t believe it. We were gonna roll this out six months ago. The problem was there is so much content that we have accrued over the years that the migration of all the data — I keep saying that RushLimbaugh.com is an encyclopedia and then some. It took months to migrate this.

We used a company in Ukraine. They were attacked by Putin a couple times. We had to start over three or four times. Well, I’m only joking about them being attacked by Putin. I don’t know, I’m feeling kind of feisty today, folks, in the face of such blatant stupidity surrounding us everywhere. On this election being hacked and this other stuff, Hollywood stuff, it’s made to order.

Anyway, we have not put a full load test on the new website until right now. None of the guest hosts mentioned it. We’ve been tweaking it and we’ve been testing it in any number of ways, but the real test obviously begins now with all of you being told that the design is new. And there’s some new features that we’re gonna be adding to it as well.

So if you visit it, don’t be surprised if it spits you out or if it shuts down. This is part of the normal rollout. We’ve tried to iron out as many of the bugs as we can, but it’s a work in progress. Although the vast majority of it is done, it’s just we put a huge load — whenever I mention a website, whatever that website is, a huge load, we shut them down. I’m trying not to shut down my own site.

As I say, we’ve tested it for a few days here. It has not been mentioned on the air. A bunch of problems have been solved in the past week or so, but a lot of the bugs, and there are always bugs in this kind of thing, we’re still smoothing out some of them. And there were some glitches that popped up today, for example, as we got ready to roll out. We’re working through them. It’s a work in progress. So just be patient with us while this all gets going.

Now, some of the things at RushLimbaugh.com I just want to mention. Hang on just a second. My DirecTV screen saver’s popped into play here, and I gotta get ’em off so I can see what’s on the — I don’t know; we need to change the timing of these screen savers so they never come on. Available to everyone, both on the free side and the subscriber side, something called Just in From Rush. This is a place right at the top left of the home page where I will be able to post thoughts when I’m off the air. This will be how other people use Twitter.

Just in From Rush, and I’m not promising anything, but if I’m sitting at home or somewhere and watching the news or seeing something that I want to react to, then that’s where it will be at RushLimbaugh.com on the Just in From Rush. Who needs Twitter? I have my own website. And if you want to know what I think about something, if I care enough to update it off-hours, meaning when I’m not on the program, that’s where it’ll be.

There’s also the EIB News Ticker. This is where we’re gonna update you on news about the show and post things for you to see during the show. When I send a link, for example, on the program up to Koko, he’ll throw it in the ticker and it’ll be there for you in mere moments. The Dittohead Wall of Fame, Cool Photos, and Quotes from you right on the home page. We’re gonna have a quite serious effort in audience outreach that we want to incorporate here in the new, redesigned RushLimbaugh.com. 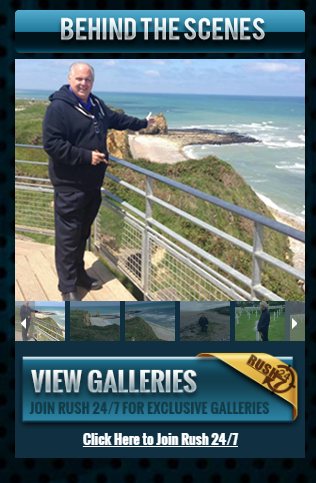 Some of the new features are for members only. We have a free side, and we have the subscriber side. The revamped Rush Stack of Stuff: No longer is this just gonna be a long list of stories that I might mention on the program. Now, you will get specifically the stories that I talk about on the program and a select list of a few others that I intended to get to but ran out of time. It’s going to be more of a real-time base feature rather than just a generic list of places that I go to prep the show. This is gonna be more specific to things I got to and intended to get to and didn’t get to.

We’re gonna make this the real thing, and this is one of the things that is gonna be a rollout feature that probably is gonna take some time to get up and running. If I don’t talk about it on the air, you don’t need to know about it anyway. If I don’t talk about it, it’s not that important for you to know about. So if you don’t see there, it’s not a big deal. There’s some other things, too, that I’ll mention over the course of the week, but there… (interruption) Oh, the design’s gorgeous. The design is absolutely gorgeous.

As I say, it was getting too cluttered. It was getting too blue. It was just overwhelming. It was just too crowded. We didn’t really have penile extension ads. I was just mentioning that. Who would have known? There was so much clutter in there, somebody could accused us of it and we might not have been able to deny it. (interruption) Yeah, the banner. That’s pretty. Now, a couple other things are gonna happen here, folks. As you know, I have hobbies, keeping up with the latest technology, innovation, invention news. That’s a hobby. And, of course, sports.

But the Stick-to-the-Issues Crowd here really resents it when I take time out from bashing the left and telling the truth about the news, and so we’re gonna have an actual tech section, and the same thing with sports. On the tech section, for example, I’m gonna offer (with screenshots) tips on how to fix things that go wrong with your iPhone or hidden features that you may not know about: How to check battery life, how to get the best battery life, all kinds of little things that most users probably don’t even know are available on their iPhone or iPad.

And there’s gonna be a way for you to submit questions. I don’t know how often this is gonna be updated, but it’s something that I really care about and want to put some time into. And the same thing on the sports side. So that’s the news at RushLimbaugh.com. We’re rolling out a new design today that does have different content algorithms and all — and, as I say, it’s gonna be a little spotty here for a week or so. So if it crashes on you or there are delays — if you think your internet’s down — it’s not that. It’s just an attempt here to make it smooth and iron out the always-present bugs.