Did Buckley Have Regrets About Vidal?


RUSH: To Allen Park, Michigan. This is Patricia, and I’m glad you called.  How are you?

CALLER:  Hi, Rush.  I’m fine.  Thank you.  And, Rush, you are America’s sane space. Thank you, and Merry Christmas.

RUSH:  Sane space.  I like that.  Yeah, the only three hours where things appear to be normal consistently.

CALLER:  Rush, I know you knew William F. Buckley and his works, and after having recently watched a documentary of the 1968 debates between Buckley and Gore Vidal during the presidential nominating conventions, I was curious about your thoughts as to why years after the debate Buckley, at least according to the documentary, was so upset and consumed by his remarks toward Vidal.

RUSH:  Well, first place, where do you get that he was upset and consumed by his remarks toward Gore Vidal?

CALLER:  Well, that was according to the documentary, and at the time — and this was a couple of weeks ago we saw it on a PBS program, and I just thought, you know, that the media even back then making more of a dustup just because Buckley —

RUSH:  Did you actually hear Buckley say it or did the narrator say it?

CALLER:  The narrator indicated that after Buckley had made his remark something about, you know, stop calling me a crypto-Nazi or I’ll stock you in the G-D face.

CALLER:  I can’t remember what it was, a few weeks ago —

RUSH:  Well, he called him the F-word for homosexual.

RUSH:  Gore Vidal called him a crypto-Nazi and Buckley said he would punch him in the face, you GDF, or punch you in the G-D face, you-whatever. Look, I have never heard — now, I haven’t spent a lot of time or didn’t spend a lot of time talking to Mr. Buckley about this particular episode.  I never heard him express regret over anything that he had said or done.

CALLER:  Well, they indicated that at least — again, according to the documentary, that he swore he’d never talk about it again, he was so upset by, I guess his performance, if you will, or, you know —

RUSH:  No, no, no.  Look, I’m gonna summarily reject that based on my knowledge of him, and this is the first I’ve heard of it.  The only thing that I heard that’s remotely close to this — and, by the way, you’ve got to allow that I might be incorrect about this, ’cause I haven’t spoken to him personally about this particular episode, but I’m very familiar with it, and I’ll be able to find this out in short order if anybody over there is still working today, or this week.  But if there was any truth to the fact that he didn’t want to talk about it, it’s that he’s just tired of talking about it.

And I don’t think — somebody like Buckley, there may have been some regret that Gore Vidal had goaded him into using language like that, but the desire not to talk about it I think was more a desire to not be defined by it.  Look, what more is there to say about this?  There were many other aspects to his career.  The people that are doing documentaries like this would love to be able to portray that Gore Vidal was the superior correct being in this episode and that Buckley was the ne’er-do-well, low-rent whatever, and forever regretted it. I think actually — well, maybe I’m on thin ice here, but my basic memory is that he wasn’t embarrassed about this at all. 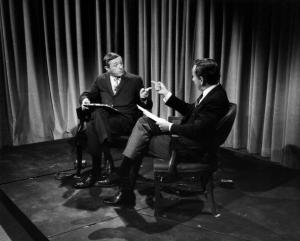 CALLER:  Oh, they made a big to-do that he was and like you say, Gore Vidal looked like he smelled like a rose coming out of it.

RUSH:  Well, in this documentary?

CALLER:  In this documentary, yeah.

RUSH:  What are you doing watching a PBS documentary anyway?  Just because you’re fascinated by Buckley?

CALLER:  Yes.  That’s the only reason why I watched it. I happened to be flipping flew and I saw the title, when I saw Buckley’s name I thought, “Oh, okay I’m gonna listen to this,” that’s why I watched it.  PBS is okay for some things.  You know.

RUSH:  I’ll find out.  I may not be able to find out today but I will find out. Has it upset you?

CALLER:  Well, it just troubled me because I thought, you know, I’ve always thought of Buckley as a very, you know, genteel sort of man in the way he spoke and so forth and so —

RUSH:  Well, he was, but Gore Vidal was an SOB.  He was not a nice guy. Gore Vidal was a bitter, angry, arrogant, condescending — nobody ought feel any regret over any of that.  Look, only because of the constraints of time I have to end.  I’m not being rude or running away from it, but I still have to ask you, what kind of iPhone do you want, a 7 or a 7 Plus?

CALLER:  You know, I’ve never owned an Apple product, so this is kind of exciting for me, Rush.

RUSH:  All right.  Now, do you have a cell phone now, and what carrier?

CALLER:  If you have the jet black left —

RUSH:  I do.  It’s gonna be SIM-free, it’s unlocked, it’ll work on AT&T or any other carrier you want to sign up with, including AT&T.  Hang on while we get your address, and I’ll find out the answer to your question.

RUSH: We’ve got the audio sound bite here, we’ve got a clip from the Buckley-Gore Vidal debate.  It happened August 28, 1968, it was on ABC TV.  Buckley did not use the F-word, he used the Q-word.  Called him a GDQ.  You’ll hear it here coming in a second.  I did a little research.  This thing is running on Netflix.  I remember when it came out.  I haven’t seen it.  It’s got all kinds of people thinking it’s great and it’s wonderful and it’s not a hit piece and that’s fine and dandy.

He was not what they thought him to be.  They thought he was brilliant and analytical.  It’s a very rare bunch of air that people in this group breathe.  Kissinger was in it, Buckley, some others, and he was identified, and he ended up being a disappointment.  Now he’s more of a moderate, slash, progressive, if anything, and he wrote a review, and his was at Politico.  I’ve read these two reviews.  The National Review article was about 50 pages long and I haven’t been able to go through all of that, but I can’t find anybody by name who has said that this was one of the greatest regrets of Buckley’s life.

Now, what the documentary did have was a bunch of modern-day pundits weighing in on their thoughts on both Vidal and Buckley, and maybe one of those people who claimed to know Buckley told the producers of the documentary that Buckley regretted this more than anything else in his career.  And so the narrator, the script writer, put it in, but I can’t find anybody in the documentary actually having said that other than the narrator.

But I’m not through with my — ’cause there are people at National Review that will know, and I don’t have time to get a hold of them here.  Not that I can’t, I just don’t have time right now.  But I’m gonna find out about this, only to satisfy the caller, not because I care about the documentary.  Here is the bite.  It runs a little over a minute long, the famous exchange the caller was talking about.

VIDAL:  You must realize what some of the political issues are here, the many —

VIDAL:  — people in the United States happen to believe that United States policy is wrong in Vietnam and the Vietcong are correct in wanting to organize their country in their own way politically.  This happens to be pretty much the opinion of western Europe and the other parts of the world.  If it is a novelty in Chicago, that is too bad, but I assume that the point of American democracy — 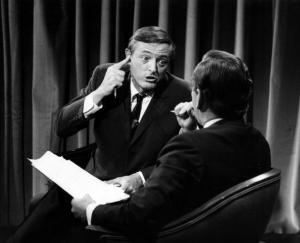 VIDAL:  Shut up a minute.

BUCKLEY:  No, I won’t.  Some people were pro-Nazi and the answer is that they were — they were well treated by people who ostracized them, and I’m for ostracizing people who egg on other people to shoot American Marines and American soldiers.  I know you don’t care —

VIDAL:  As far as I’m concerned, the only crypto-Nazi I can think of is yourself.  Failing that —

BUCKLEY:  Now, listen you queer, stop calling me a crypto-Nazi —

BUCKLEY:  — or I’ll sock you in your goddamn face and you’ll stay plastered.

BUCKLEY:  — go back to his pornography and stop making any allusions of Nazism to someone who was infantry in the last war.

RUSH:  That’s Buckley there going after Gore Vidal.  I have to tell you, I’ve not ever heard anybody nor Buckley himself say anything like that this is the most regrettable event in his career, but there are people who would know better than I so we will find out. But that’s what the caller was talking about, it was on ABC TV.

I don’t think it was Dick Cavett that was the moderator, but might have been ’cause he had a show back then on ABC.  They were going up against The Tonight Show and Johnny Carson.  Dick Cavett’s like 5’2.  If he played third base — well, he couldn’t because he couldn’t see over the pitcher’s mound to throw to first.  But a tiny little guy back there and he was highly, highly, you know, Hamptons intellectual, and they were going up against the Tonight Show with this.  I think this was a special. It might have been a Firing Line thing, but that was on PBS.

RUSH:  Okay.  Talked to Rich Lowry back at National Review.  Buckley did regret it.  It was special election coverage 1968.  Howard K. Smith, remember Howard K. Smith, he was the moderator, ABC special election coverage ’68 campaign, that’s why the reference to Chicago in the clip.  What Buckley regretted was the use of the word “queer” and tried to write his way out of the episode, is what I was told.

So the documentary was correct.  I don’t know to what degree.  The caller said that it was Buckley’s lifelong regret that he never got over, and I don’t know if that was the case.  I mean, when I was around him he didn’t seem to regret it.  He wasn’t carrying it around as a burden, but nevertheless he did regret it, apparently the use of the word queer in talking about Mr. Vidal.  That word is not even used anymore.  I mean, they do.  It’s kind of like — there’s no point in — don’t even suck me into this.  There’s no reason going there.  Explain the answer to the question, that’s it.