RUSH: Stan in Yorktown Heights, New York.  I’m glad you called.  Great to have you with us on the program, sir.  Hi.

CALLER:  I’ve been fascinated with all of the people going up and down the golden elevator in the Trump Tower, and most fascinating to me was the Carlos Slim meeting.  And I was just curious what your take on Trump’s ability to persuade Carlos into, you know, having some influence over the New York Times and, you know, seeing how he’s a majority stakeholder, shareholder.

But you are right, here is the thing, Trump did have dinner with Carlos Slim here, not at Trump Tower, but at Mar-a-Lago on Saturday night.  And let me read to you one of the accounts of this from TheHill.com.  “Trump Confirms He Met with Mexican Billionaire Carlos Slim.”  Mostly through Slim’s mouthpiece, the New York Times, has Trump been ridiculed and lampooned and made fun of and ripped to shreds. And in addition to the Times, Carlos Slim himself was a vocal critic of Trump’s promise to renegotiate NAFTA and to build a wall on the US-Mexico border that Trump vowed Mexico would pay for.

During the campaign, Carlos Slim, when he did speak, he was a vocal critic of Trump and in many ways mocked him and made fun of him.  Now, after dinner — this is why Stan’s calling.  The news after the dinner is that they had a great time at dinner and Carlos Slim saw a different side of Trump, and they’ve got a new line of communication open.  And it says here that Carlos Slim has softened his rhetoric about Trump.

They quote Slim in the Washington Post as saying, “If Trump is able to grow the United States economy and jobs, that would be fantastic for Mexico.  If the United States grows 4 percent, increases infrastructure and lowers taxes, that is good.” Look, Stan, same thing I said to the previous caller.  Right now everybody loves Trump because everybody wants to be perceived on his side.  He’s universally, overwhelmingly popular among the people who voted for him. He’s a singularly charismatic figure, but they’re just waiting to pounce if he slips. 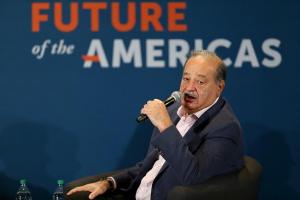 RUSH:  Yeah.  And your carrier?

RUSH:  And your color?

CALLER:  My wife loves the gold.

RUSH:  Then that’s what you will have, a gold iPhone 7 Plus. It’s actually gonna be SIM-free, meaning it’s unlocked, it will work with any carrier.  So make sure you hang on to give us your address, we can get it out to you.  If all goes right, you’ll have it tomorrow.