RUSH: Newt Gingrich.  Audio sound bite number five.  Newt was on NPR today, Morning Edition.  By the way, I want to apologize to the staff.  This is like the third day in a row that we’ve had a sound bite from NPR, and that means somebody is — you turn on NPR and it’s the hardest thing in the world not to fall asleep.  And my staff even during the holidays performing yeoman duty.  I mean, they watch CNN.  They do screen MSNBC in case something that might survive the ban here, but now NPR.  Newt was there today.  Rachel Martin, cohost, Morning Edition, said, “What about Trump’s often-stated promise to drain the swamp in Washington, Newt?  What does that mean?  What’s he gonna do?”

RUSH:  So Newt is gonna stop talking about draining the swamp because he’s heard that Trump is telling people he wants to disclaim it, he wants to stop using it.  I haven’t heard that.  Not that I would.  We will see.  You know, Trump is gonna continue doing rallies, I think wisely, and I’m just curious to see if he actually will cease using the phrase.  I’m also — you know when I hear something like this — and, look, don’t anybody call Newt and tell him I’m accusing him of anything here.

I’ve had this happen to me, which is why, ladies and gentlemen, I offer the possibility that maybe Trump isn’t saying this at all. That there might be people in Trump’s circle who wish he would stop saying it, who then go out and will tell Newt or any or number of people, “Yeah, yeah, Trump says he’s not gonna use it anymore.  He doesn’t like the phrase.”

Because, you know, in every prominent person’s circle there are people — and people are people — and some of them don’t like having to defend what the prominent person does or says, and some of them get nervous that they might be seen as defending something they wouldn’t ordinarily defend. And there might be somebody in Trump’s close circle that really doesn’t like this “drain the swamp” talk.  It might be somebody that has ties to the establishment, i.e., the swamp. 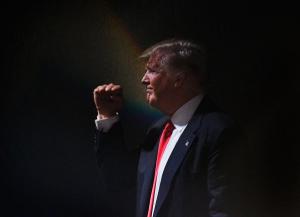 There’s a lot of people who want to be thought to be in the inner circle so that some of that attention might cast itself on them.  Any number of things could explain it. And it could also be that Trump has disclaimed it, too.  I’m just sharing with you the way I react to things like that.  It’s why I don’t want anybody calling Newt and telling Newt that I am not believing what he said.  That’s not my point here.