Wouldn’t It Be Delicious If Democrats Leaked Everything to Stop Hillary? 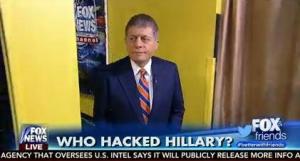 Then the U.K. Daily Mail story:  “Ex-British ambassador who is now a WikiLeaks operative claims Russia did not provide Clinton emails,” to WikiLeaks. That, in fact, “they were handed over to him,” an ex-British ambassador, “at a D.C. park by an intermediary for ‘disgusted’ Democratic whistleblowers.”

When this all settles in, wouldn’t it just be the most delicious irony of all if it was, in fact, Democrat whistleblowers who had no desire for Hillary Clinton to get anywhere near the Oval Office who were doing the leaking and the, quote/unquote, “sabotage”?  Wouldn’t that just be delicious, folks?  And I wouldn’t discount the possibility.

Two sources now alleging to it, and I wouldn’t doubt it at all, when the media gets on a narrative and runs with it like they are this Russian business, I guarantee you, guarantee you it’s very possible this is nowhere near what really happened.