RUSH: Ladies and gentlemen, what is one of the things…? It’s an unfair question because there’s so many possible answers.  What would come to your mind first or second if I asked you the question, “What have I said consistently about Obama in trying to get people to understand who he is?” Answer: “He’s got a chip on his shoulder about this entire country from the founding forward because he thinks it’s unjust and illegitimate, was a slave state (and still is) and therefore is heavily balanced and abused against African-Americans.” I’ve said that I can’t tell you how many times.

I’ve had people say, “You know what, Rush? It’s too pat. It’s too simple.  It’s not…  Obama’s not that simple.  It’s gotta be much more complicated.” No, no, no!  It is that simple because Obama’s a liberal.  He’s a liberal radical.  As such, that’s who he is.  He’s not the only one who looks at America that way.  I mean, he’s presiding over a country that in his eyes deserves to be in decline.  He’s presiding over a country for which he needs to apologize.  Well, Obama gave an interview.  He was on Comedy Central on Monday night.  He was on The Daily Show.

It’s hosted by Noah Trevor, or Trevor Noah, I forgot which.  It doesn’t matter.  And on this program Obama said that America has “by no means overcome the legacies of slavery and Jim Crow and colonialism and racism.”  America has by no means overcome any of that.  Here’s what he actually said.  Grab audio sound bite number three.  It was last night, Comedy Central, The Daily Show with Trevor Noah.  And the question from the Comedy Central host: “If you’re a white person speaking about race, then you’re just a person who’s interested in race.

“If you’re a person of color speaking about race, it’s like, ‘Oh, the black thing started again.’  So the question I’ve always wanted to know is, how did you navigate that, because we watched you do it.  But I also wanted to know how you navigated that through your two terms.”  Now, does anybody know what he’s asking here?  Is he asking Obama, “How did you navigate the fact that this is a racist country that doesn’t want you in this office?”  Is that what he’s asking?  What was he asking? (interruption) You don’t know?  Anyway, it doesn’t matter.  Here’s what Obama said… 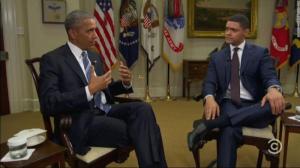 RUSH:  Well, it’s leftist gobbledygook there.  But you heard the answer.  No, no, no.  “You know, my general theory is that, if I was clear in my own mind about who I was, comfortable in my own skin and had clarity about the way in which race continues to be this powerful factor in so many elements of our lives.” So his legacy, he’s setting it up here.  His legacy’s all about race.  And I want to go on record.  He’s the guy, folks — he is and the Democrat Party are the ones — who made his Regime all about race.  His race defined his presidency.  It would…

Racial strife in this country’s maybe worse than… Well, no. Definitely it’s worse than when he took office.  But I play this sound bite just to let you know that I know what I’m talking about, know who these people are, know how they think.  And that chip on his shoulder is there.  And his wife has it, too.  They do.  And I think they’re providing lip service here when they say that there’s been incredible progress, ’cause that’s not what they focus on.

They don’t focus on the incredible progress.  That’s a throwaway line.  The Democrat Party is a party of identity politics.  The Democrat Party is a party that seeks its power by putting its members into groups of victims who have grievances against America, and the grievances are all rooted in the American founding.  And it has led us to where we are, and there has now been a huge backlash against it, and Obama admits going out of office that race is his legacy.

RUSH: I want to stick with President Obama here for just a second because HBO has a new nightly newscast show called VICE, and Obama was on this program, VICE Special Report.  He was on this show Friday night.  Now, Obama came into office with me on his mind.  This is not ego speaking; it’s fact.

Two weeks after Obama was immaculated, he held a meeting in the White House with congressional leaders from both parties.  And John Boehner was there and Mitch McConnell from the Senate.  There were about eight or nine Republicans here with an equal number, maybe a few more Democrats there. Obama was laying down the law, and he was explaining how things were gonna be, how they were gonna work together to get things done, cross the aisle and all that happy horse manure.  And Obama looked at the Republicans and he said to them, “You’ve got to stop listening to Rush Limbaugh.

“That’s not how things get done in Washington.”  John Boehner looked around and said, “What…? What’s that about?”  Boehner came down here a couple weeks later, I had a meeting with him, and he told me about it.  “I don’t know why he would say that.”  I said, “Mr. Speaker, he was hoping that you or McConnell or somebody from your group there would walk to the microphones outside White House, outside the West Wing, and agree with him, that it was time to stop listening to Rush Limbaugh and that the Republicans were now working with Obama toward a new day. That’s what he was hoping.”

He had had a meeting — he had had a dinner party — with the conservatives he wanted to be known as the conservative leaders in Washington: George Will, Charles Krauthammer, Larry Kudlow. There are three or four others.  But he wanted them to stop listening to me.  So he comes into office warning the Republicans to forget me because he was under the impression that they’re afraid of me and they’re afraid of me criticizing them, so they don’t do what Obama thinks they should do.  On this program on HBO Friday night, Shane Smith is the host. He said, “Mr. President, you’re leaving office soon, two terms, a lot of partisan politics, a lot of fighting, known for that.  Seems as if it will become even more paralyzed now that you’re leaving.  Where do you see politics going?”

OBAMA:  We have some structural problems in our politics more broadly that are creating greater polarization.  The fact that our media has gotten so splintered… You know, as recently as Bill Clinton’s presidency, certainly with Ronald Reagan’s presidency, the majority of people still consumed their news from the nightly networks, and you had common basis of facts.  And today, anybody with access to a website has an opinion. … The Republicans are only concerned about what’s on Fox News or what Rush Limbaugh’s saying and the Democrats are looking at the New York Times or Huffington Post.

Because everybody was working off the same set, the same narrative, the same propaganda.

Democrats have lost control of the media now.