RUSH: My little tech blogger buddies, who really literally hate me, are just gonna be beside themselves today.  They’re not going to know how to process this.  They are going to be confused and angry and questioning the purpose of life, all because Bill Gates went on CNBC’s Squawk Box this morning and was asked by the hostette there, Becky Quick, “Donald Trump mentioned he had a phone call with you.  How’d that conversation go, Mr. Gates?”

GATES:  I had an opportunity to talk to him about innovation.  You know, a lot of his message, in the same way that President Kennedy talked about the space mission and got the country behind that, I think that whether it’s education or stopping epidemics and in this energy space there can be a very upbeat message that his administration is gonna organize things, get rid of regulatory barriers and have American leadership through innovation.

I mean, this is incredible. “In the same way President Kennedy talked about the space mission and got the country behind that, I think whether it’s education or stopping epidemics or this energy space.”  I don’t think he’s talking about global warming here.  I think he’s talking about energy creation, maybe innovation in energy creation.  He said, “There can be a very upbeat message that Trump’s administration’s gonna organize things, get rid of regulatory barriers, and have American leadership through innovation.”

Gates further said that he spoke with Trump on the phone, discussed the power of innovation.  Gates said, “Of course my whole career’s been along those lines,” and Trump was interested in listening to that, and I’m sure there will be further conversations.  Gates also said of Trump, “A lot of Trump’s message has been about where he sees things not as good as he would like.”  Well, well, well, well.

But there is another possibility. It’s remote, very, very, ’cause I think Gates is being honest here, but go to audio sound bite 14.  Maureen Dowd, the famous MoDo, was on a late-night so-called comedy show on NBC last night, and the host, a guy named Seth Meyers, asked MoDo this question.  “You make this argument that Donald Trump’s very susceptible to compliments and he’s also very susceptible in your opinion to the last person he’s talked to.  And so that’s affecting the way people would deal with him.”

DOWD:  Right.  That’s why his staff jockeys to get the last appointment of the day because the last person who talks to him has a lot of sway.  And, you know, he over-flatters people, and he likes to be over-flattered because basically he doesn’t — his ideology is his ego, so, you know, everybody in Washington, from President Obama to Mitch McConnell, is trying to flatter him.

DOWD:  He’s almost like a host body, and they think they can change his mind or pour their agenda in with some flattery, and that worked with Putin.

RUSH:  Everybody in Washington is trying to flatter him?  In what Washington is she paying attention?  But, anyway, you get the point here that MoDo is saying a lot of people, in order to trick Trump — this what she’s saying — a lot of people, in order to fool Trump, a lot of people are setting Trump up by flattering him, by telling him how wonderful he is, by telling him how great he is. And in this way, she is basically saying here, this is how Trump’s enemies and opponents can disarm him and then be poised to sneak up on him for the kill.  Right.  Kiss his butt and you own him!

I played that bite following Gates because I’m sure that MoDo, upon hearing Gates, this is exactly what I’m talking about, Gates is flattering the guy.  Gates doesn’t really think this guy’s JFK.  Come on.  He’s just flattering Trump to get on Trump’s good side.

In fact, folks, that is not how you deal with Donald Trump.  Donald Trump is not unsure of who he is.  It’s exactly, however, how you must deal with Barack Obama.  This is interesting to me because this is the precise way you have to deal with Obama.  You have to regard Obama as singularly great, uniquely great, unprecedented, a special kind of smart, that’s how you do it.  He demands it, practically.  It’s how he looks at himself.

Is there any doubt in your mind — I mean, I’m sure you’ve heard Trump praise Obama.  We have reported to you on this program the details of that.  He talks about how he loves talking to Obama, and Obama’s advising him and Obama’s being very helpful and he really, really, really has grown to like Obama.  You know my theory on that.  I gotta be very careful.  I don’t want you people to tell anybody so that Obama would hear it ’cause that would kind of give it away.

But my theory is that Trump is very much aware of how dangerously and precariously perched the country is for the next, what, six weeks, five weeks.  And the last thing that you want to do is irritate and provoke the guy who has control of all the levers of power.  And so you go in there and you regard him as a superior, as smarter than you, really, really helpful, talk about how much — now, look, don’t tell Obama.  If you tell Obama this, then the ruse is destroyed.  Just keep it between us. (interruption) Oh, no, the Drive-Bys don’t listen, and Media Matters are not gonna highlight this.  So we can keep this among ourselves. 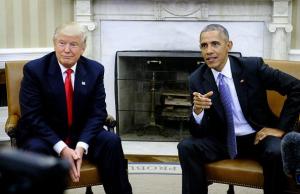 I’ve actually had people tell me that.  “You don’t do that.”  No, I don’t do that.  And, by the same token, people are finding that Trump is not this monster that the Drive-Bys have made him out to be.  I mean, he’s a profoundly successful businessman and that’s what Gates is.

So we’ll see here.  But I think people are in for a lot of shock and surprise, even more people that meet Trump.  He’s got… Is it today or next week? It must be next week, ’cause they’re not talking about it.  Trump’s got this summit with all the Silicon Valley CEOs, including the Google Obama guys who are coming in.  And I will wager that not all, but a lot of them are gonna come out of that meeting singing a much different tune than they will sing going in.  I’ll tell you, folks, it does surprise me.  We’re talking about intelligent people here.

We’re talking about people who see themselves reported on in the media who ought know that much of what’s said about them isn’t true, and they might then assume or think that much of what’s said about, say, someone like Trump isn’t true.  But that’s not how it works.  You tend to believe what you read or watch, and it forms an impression, and then you meet whoever it is that you’ve created this impression of and they turn out to be totally different — and you’re flabbergasted.  I think there’s more of that coming.

But I can’t wait ’til after the program today to consult my tech blogs to find out how many of them are on the ledge threatening to jump and wondering what Trump had to pay Gates or offer Gates to get Gates to say what he said. “After Talking with Trump, Bill Gates Said President-Elect Could Be Like JFK.” Notice he didn’t come out of the of the meeting say, “My gosh, I thought I was talking to Hitler!  Oh, my God, I thought was I talking to Mussolini!  Oh, my God, I thought I was talking to a fascist.  We’re in trouble!  Oh, my God!  This is worse than I thought!” He didn’t say that.

He came out comparing Trump to JFK and the Moon program.