The Essence of Bravery and Courage


RUSH:  John Glenn, first man to orbit the Earth, one of the original seven astronauts announced for the Mercury program, and it was all part of the effort to get to the moon.  The Mercury program, Gemini, then Apollo, all of it was test flights to get to the Moon in stages, ’cause nobody had the slightest idea other than what the brilliant physics and scientists could predict and calculate about actually getting there and what we were gonna encounter once we did.

You know the life expectancy of a test pilot in the forties, fifties and sixties, it would stun you how many test pilots died.  They were the essence of pioneers and bravery and courage.  Chuck Yeager in something not much bigger than a lawn mower breaks the speed of sound.  Guys that flew in the X-15, they would have to put them on the bottom of a wing of a B-52, take ’em up to 30,000 feet and drop them because they couldn’t take off from earth. There was no fuel to take off, defeat gravity, and get up to the speed of sound.  They had to break the sound barrier, and they had to go as fast they could to find out what the effect on the human body was.  Could human beings remain conscious?  Could they control an airplane in those circumstances?

And many of these guys ran out of fuel and had to parachute back.  The aircraft themselves had parachutes.  Some of them had to eject.  This is the place John Glenn came from.  He flew fighter aircraft in Korea.  His young life was one of putting his life on the line practically every day.  And that continued all the way through his space flight career, his astronaut career.

Dr. Krauthammer was discussing this a little bit last night on Fox, and he actually was quite right on the real scope of this.  You know, I would urge everybody to visit the Smithsonian Air and Space Museum in Washington.  It is one of the most fascinating places you can go in all of Washington.  Of course, the National Archives and all the monuments, but you’ve got to see some of the early spacecraft. 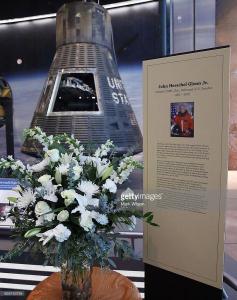 You’re not.  You are on top of what everybody else is running away from.  You are on top of what everybody’s hiding from.  And in Glenn’s case, I think the rocket he was on was the first time.  When Alan Shepard, the 15-minute suborbital, that was a Redstone rocket, and it was a big rocket for its day.  But Glenn, the rocket necessary to get one of these things in orbit I think was, I want to say Atlas, but I get the names of the rockets confused.  But the point is the Mercury space capsule was not much bigger than the couch the astronaut sits in.  It was tiny.  It was cramped.

Do you know the original design did not even have windows?  The original design of the Mercury spacecraft had no windows because the designers didn’t want any weaknesses. (interruption) It was the Atlas 63B that launched Glenn. Yeah, the Redstone is what launched Shepard and Schirra.  The Atlas rocket was huge for its day.  The original designers, the scientists, the Oppenheimer’s and the von Braun’s, they didn’t want any windows.  Those were weak structural points.  They wanted the astronauts with no way to see outside.

The astronauts insisted that there were gonna be a couple of windows in it.  So they were there.  They were smaller than an airliner window is today and they really had to fight hard for those windows.  They got them.  You’re on top of this rocket, and it’s gonna take you someplace where no human being has ever been, and you’re gonna be up there for three times an hour and a half.  It takes 90 minutes to orbit the Earth so you’re gonna do three orbits.

On top of this missile, on top of the capsule is what was the retro tower.  Well, that was the escape tower.  On the back of the capsule, behind it, was the retrorockets, and they were gonna fire, and they had to fire at the precise time and place.  They were not fired manually by the astronaut.  It was all computer programmed, written and designed, because if there was even a two-second error that capsule would come down thousands of miles away from the rescue boats.

The precision necessary to make this happen nobody had done.  And nobody had gone through reentry.  Meaning, the heat of coming back through the atmosphere at incredible speeds heats up the spacecraft.  They had this brand-new design of a heat shield that the astronaut’s back, the chair the astronaut sits in is right where that heat shield is, the whole back bottom of the capsule.  Just doing that alone is a degree of bravery that most people don’t even stop to think about.  You just think, “Well, we wouldn’t be doing it if it wasn’t safe.  They wouldn’t be doing this if it wasn’t safe,” and it was precisely because it wasn’t safe that we were doing it, to find out what we needed to do to make it safe.

There were all kinds of expectations that astronauts would perish, and some did on the ground.  Gus Grissom, who was one of the original seven, actually died in an Apollo fire on the ground in a test fire.  They weren’t gonna leave the pad.  Oxygen-rich atmosphere, something sparked, and they burned to death on the launch pad.  Yeah.  That’s in 1967, January 27, Gus Grissom, and he was one of the most lovable of the astronauts.

Anyway, while all your buddies leave and hide in the concrete bunker, you’re on top of this rocket, and this thing launches, and all they’ve been able to do is simulate it.  Glenn’s doing it for the first time in an orbital actual mission.  Reentry, people have forgotten this, but they thought they were gonna lose John Glenn during reentry because you lose radio communications.  The heat reflected off the heat shield creates an impenetrable, invisible shield around the capsule.  Still true today.  That prevents radio communications for, I think in those days it was like 10 minutes.  You had no contact.

You had no idea what was going on.  And the first reentry when Glenn was coming through the atmosphere, he looked out the window that almost wasn’t gonna be there, and he saw flames, he saw fire.  Nobody had prepared him for this.  They had no idea what it was.  Glenn himself feared that the heat shield was burning up and that he was next.  He was scared to death that that heat shield was gonna just disintegrate and that he would be next and that whole capsule was just gonna vaporize.

And then you land.  But you don’t land; you float down under a parachute, and you damn well hope that the computer fired the retrorockets at the exact, precise time, otherwise the giant Navy destroyers waiting to pluck you out of the ocean are not gonna be anywhere near you.

Well, in Glenn’s case, everything worked.  They were able to pluck him out of the ocean and the capsule, but in a couple other instances it didn’t work and the computer misfired, couple seconds later, and I forget, was it Wally Schirra?  You know, a lot of time has passed by.  It might have been Grissom.  It was Grissom who panicked and opened… He blew the hatch and left the capsule, and the helicopter came and the capsule filled with water.  They hooked onto the capsule, trying to get the capsule out. They wanted to save these things, and helicopter could not lift it.

It was too heavy, couldn’t lifted. They lost Grissom’s capsule.  But these guys were the essence of bravery.  Grissom just happened… You know, it’s hot in this thing, just come through reentry.  There’s no air-conditioning in these capsules.  You not supposed to blow the hatch.  You stay in that capsule ’til the helicopter grabs you and lands you back on the deck of the ship.  You’re not wearing any life preservers or any of that sort of stuff.  The capsule itself does launch, on touchdown, a raft-type device, but I don’t think it deployed.

Grissom almost drowned.  He’s out there swimming around, and the helicopter’s coming to get him, and they tried to save the capsule.  But the point is that these guys were every bit as brave as Columbus and these people that got on these boats and thought they were going to the edge of the Earth.  And today all that’s been lost, because it’s so far ago, and space flight today is so much different.  And it’s been romanticized in movies as normal as living on Earth and so forth, but unfortunately that’s what people’s experience with it is.

I mean, those guys were just a breed apart.  Chuck Yeager to this day is celebrated by people in his generation, and Glenn, for the bravery and the courage.  And as I say, it all was part of getting to the Moon.  Every launch of a Mercury capsule or a Gemini, which was two astronauts, was designed to learn what it took and how these capsules could maneuver in space and how you could dock them together. Could we send a rescue capsule up for one that had lost power? All of these things.  That’s why it took ten years because all this was nothing but test, test, test, test. 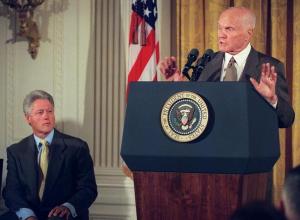 Like Tang was from the space program. Laugh or not, it was. Any number of things that ended up in your kitchen as electric appliances, many of them started in the space program.  Anyway, John Glenn then decides to go into politics, and he became one of the most partisan liberal Democrats during the Clinton years that I can recall.  I always had trouble putting these two things together, but that’s who he was, and that’s who many of them were.

Alan Shepard, Gus Grissom, Wally Schirra, Scott Carpenter, Glenn. Incredible, brave, innovative, courageous people.  There was nothing they were afraid of.  They didn’t seek solace when they heard things that they didn’t agree with.  They weren’t innocent snowflakes that needed to be protected.  They didn’t get participation trophies or any of that.

RUSH:  John Glenn’s capsule — I think it was called Friendship 7 — was seven-feet wide at its widest point at the bottom, seven-feet wide.  Folks, it’s like going up to into space in a bathtub.  The bathtub’s even a little larger than what these guys were in.

RUSH:  Yeah, I was so into the space program my mother knitted me a sweater. It was a blue sweater and it had Mercury space capsules on the front of it.  And it was a comfortable sweater.  I mean, I actually could wear the thing.  She just knitted it with the knitting needles and so forth. She got into it, decided to make one for me.  I was totally into the whole notion.  I was big on aeronautical things anyway, flying and airports.