Reince Gets His Cabinet Pick

RUSH:  Just before the program began — and on the surface it might not seem like much, but this is a classic example of why you’re fortunate to have me as your host.  The Trump campaign released, and the Drive-By Media is picking it up, that Trump is expected to tap Representative Cathy McMorris Rodgers, who is a member of the Republican leadership in the House.  She’s from the state of Washington.  Trump is expected to pick her to lead the interior department.

Now, listen to what the Wall Street Journal says, how they characterize this.  “Ms. McMorris Rodgers, a senior member of the House of Representatives, if confirmed by the Senate, would lead Mr. Trump’s efforts to open up federal lands and waters to fossil-fuel development and reverse environmental policies the Obama administration has pursued over the past eight years.”

I just find it fascinating the way the Wall Street Journal and everybody thinks they’re, you know, on our side of things.  “Ms. Rodgers would lead Mr. Trump’s efforts to open up federal lands and waters to fossil-fuel development.” You gotta understand, saying that is like showing Dracula the cross.  You know, global warming, some politician said this the other day, yesterday maybe.  He’s got it exactly right.

It’s their religion.  Therefore it’s a faith, it’s not up for debate, it’s not up for argument and this is the way they’ve categorized it.  And one of the tenets of their religion is that oil is an absolutely destructive element and ought not ever be used.  It’s in the climate change top 10, if you will, and so writing it the way they have here, Ms. Rodgers “would lead Mr. Trump’s efforts to open up federal lands and waters to fossil-fuel development and reverse environmental policies the Obama administration has pursued over the past eight years.” 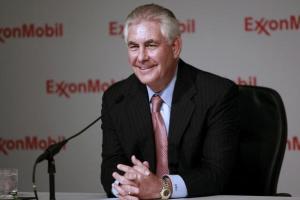 And you know why Trump likes him?  The guy does deals.  He has to, as the CEO of Exxon they do business in 50 countries.  This guy negotiates deals on behalf of Big Oil, and Exxon is number one Big Oil. And Trump is very proud of this team he’s putting together.  The left is trying to rip him as they’re all rich, they’re all distant, they’re all unlike most Americans, and of course that’s not the case at all. 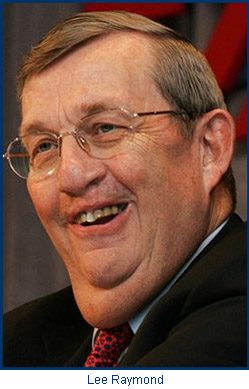 His name is on the tip of my tongue.  It’ll come to me.  Anyway, Rex Tillerson replaced this guy, and Rex Tillerson is Hollywood good looks.  Rex Tillerson is the entire package.  I… (interruption) Lee Raymond! That’s right. Lee Raymond. And I’m sure I can find the photo that I’m thinking of, with the biggest grin on his face that accompanied the story on record profits for ExxonMobil, and I just loved it because I knew how the left was gonna react to it

RUSH:  I did a little look see into Cathy McMorris Rodgers, who I believe is the Reince Priebus cabinet pick. (interruption) No, no.  And I’m not being critical of it.  I actually think Trump has given Reince Priebus — who’s his chief of staff and is from the GOP Establishment — a cabinet pick, and she’s Cathy McMorris Rodgers.  She comes from the Republican establishment.  This is supposed to appease the establishment types who may be the ones pushing Romney.  That we don’t know.  Trump’s interest in Romney may be genuine, too, but I have no doubt that the establishment…

Look, folks, I don’t care what you think and what you hear, don’t doubt me on this.  The Republican establishment and many of the Never Trumpers and some in the so-called conservative movement are still — still — very upset that Trump was elected, very doubtful Trump knows what he’s doing, would do anything they could to get people they know and trust inside Trump’s cabinet.  So far, they’ve failed.  I dare say at a most of the people Trump has chosen neither party would have picked.

They have no business getting in the way.

They have no business imposing their way on these people.

I understand the need for some regulation.  I’m not talking about unfettered anything here.  But the reason for fear is unwarranted.