“In some cases, they cite the popular vote difference. I do not think presidents-elect should be disqualified for policy disagreements. I do not think they should be disqualified because they won the Electoral College instead of the popular vote. However, now I am asked to cast a vote on Dec. 19 for someone who shows daily he is not qualified for the office.”

Hang on, folks, you haven’t heard anything yet.

“Fifteen years ago, as a firefighter, I was part of the response to the Sept. 11 attacks against our nation. That attack and this year’s election may seem unrelated, but for me the relationship becomes clearer every day.”

Hang on. Stick with me.

“Mr. Trump goes out of his way to attack the cast of ‘Saturday Night Live’ for bias. He tweets day and night, but waited two days to offer sympathy to the Ohio State community after an attack there. He does not encourage civil discourse, but chooses to stoke fear and create outrage.”

So we have an elector, a Republican elector who says he’s not gonna vote for Trump because Trump attacks the cast of Saturday Night Live. Now, wait. He says, “This is unacceptable. For me, America is that shining city on a hill that Ronald Reagan envisioned. It has problems. It has challenges. These can be met and overcome just as our nation overcame Sept. 11.”

“Alexander Hamilton also reminded us that a president cannot be a demagogue. Mr. Trump urged violence against protesters at his rallies during the campaign. He speaks of retribution against his critics. He has surrounded himself with advisers such as Stephen K. Bannon, who claims to be a Leninist and lauds villains and their thirst for power, including Darth Vader.” Really? “‘Rogue One,’ the latest ‘Star Wars’ installment, arrives later this month. I am not taking my children to see it to celebrate evil, but to show them that light can overcome it.

“Gen. Michael T. Flynn, Mr. Trump’s pick for national security adviser, has his own checkered past about rules. He installed a secret internet connection in his Pentagon office despite rules to the contrary. Sound familiar? … I believe electors should unify behind a Republican alternative, an honorable and qualified man or woman such as –” dadelut dadelut dadelut dadelut “– Gov. John Kasich of Ohio. I pray my fellow electors will do their job and join with me in discovering who that person should be.”

So he’s not gonna support Trump. He’s not gonna vote for Trump because Trump has an adviser who admires Darth Vader and because Trump criticizes Saturday Night Live. It’s pathetic. And of course no mystery the New York Times found this guy or he found them. But he’s proud and he thinks he’s virtuous, and he knows that Trump is a reprobate, a heathen, a sybaritic pursuit aspect that just doesn’t deserve to be in the White House because he’s got an adviser — and he’s gonna take his kids to see Rogue — 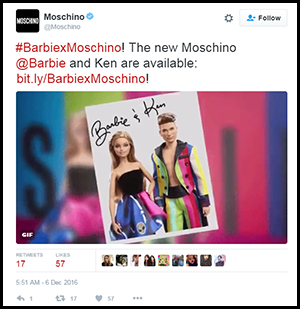 Now, the reason I say this is they have a story here from the New York Post yesterday complete with a photo of Ken and Barbie. Ken looks like he’s a gay matador and Barbie looks like she’s going to a cocktail party at Oprah’s. Well, maybe Beyonce’s, I don’t know. And the headline is: “At Long Last, Ken Gets His Own Designer Clothes.” And I’m telling you, it’s the gay flag, the clothes are the gay flag, the rainbow, and they’re vertical stripes. You don’t wear vertical stripes. Golfers will tell you this. You don’t wear vertical stripes. Overweight people do it ’cause they think it makes ’em look slim. He-he. You’re supposed to wear the horizontal stripes.

But these stripes, here they are, bright red, blue, white, yellow, aqua, pea soup green, which happens to be the color right there in the crotch. I wonder if that means anything. Pea soup green is the color where the crotch is. Does that mean anything in that world, Mr. Snerdley? I’m just asking, ’cause I don’t know, either. And here’s the story.

“Ken is finally getting the style makeover he deserves — and who better to dress up Barbie’s beau than fashion designer Jeremy Scott?” Have you ever heard of Jeremy Scott? Has anybody in there? It’s just not our world, Jeremy Scott.

“The doll duo, complete with new togs and slammin’ hair, are being sold as a set for $200. Scott has Barbie don a version of a dress worn by Stella Maxwell on the red carpet for the 2015 VMAs that’s part ‘Dynasty’ — worthy gown and part artsy graffiti. And Ken is getting his first-ever designer treatment in a miniature version of the suit that Scott wore alongside Maxwell.”

It doesn’t say it here but, I mean, that’s the rainbow flag color, right, Snerdley? It does to me. So, anyway. I wonder if all this time that all of these little girls that have been playing with Ken and Barbie dolls have known that Ken is gay. (interruption) Oh, they did? They got married, Ken and Barbie got married? Well, that kind of blows up the theory that Ken was gay. Well, actually it doesn’t, does it?

Ken could have been trapped, you know, in a patriarchal culture and in order to get anywhere close to Barbie had to stay in the closet or what have you. Well, we’ll link to it at RushLimbaugh.com and you can look at it yourself and decide if there is any meaning to it.