We’re on Offense with Donald Trump


RUSH:  Have you seen those stories yet?  If you haven’t, you will, because this is one of the many strategies that the Drive-Bys in the Democrat Party and the entire Obama crowd are ginning up.

They are pretending that Trump is inheriting a strong economy.  The effort is underway to deny any relationship to Trump’s election and this fast growing economy.  They are trying to say it’s all Obama.  Now they’re admitting in these stories that it took Obama a little bit longer than we expected, but that’s because Bush didn’t tell Obama the truth back in 2009 about how bad the economy was.  Bush lied about how deep the recession was.

So when Obama got there it was much, much worse than anybody had told the poor guy, and so the policies that Obama implemented to reignite the U.S. economy, it took a while.  In fact, just last month the unemployment number got down to where it was with Bush, and then we get the first quarter of economic growth reported at 3%, and it isn’t gonna work.  In fact, it’s laughably transparent and comical, but the Drive-Bys, they’re just flailing, folks.

The media is just flailing away.  They are impotent, they are irrelevant, and they’re becoming aware of it, and they’re bugged greatly by it.  So this meme or this narrative is that Trump is inheriting a strong Obama economy is gonna continue.  It’s going to continue to grow out there as the Drive-Bys try to convince as many people as possible that all of this is the result of Obama. And, by the way, the extension of that is, not just Obama, although the effort is to attach to him to it personally because they want to save his reputation, they also want to try to credit liberalism or Democrat Party policies for this and to say that Trump is just accidentally swerving into a gigantically robust economy because of the brilliance of Obama. 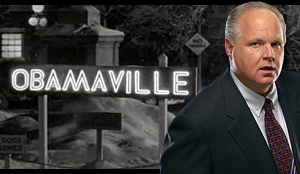 Obama’s policies, the Democrat Party’s policies have been just repudiated in almost a humiliating way.

We still have 95 million Americans not in the workforce.  The labor force participation rate is still at a near all-time high: 95 million Americans not working, and they tell us there’s an unemployment rate now of 4.6% or 4.8, whatever, which was what it was and Bush left office and they’re trying to say that Obama’s caused this great recovery.  Ninty-five million Americans not working.  And they cannot make the claim.  Their policies have not led to growth in anything other than government.  Government has grown big by stealing things from the private sector or by usurping them such as the entire health care industry.  So just keep a sharp eye.

The media’s also writing of their outrage over the frequency with which Donald Trump tweets.  Leftists, Democrats, communists alike are all saying that what Trump is doing on Twitter is an outrage. It’s not presidential, it’s beneath the dignity of the office, it’s embarrassing, it’s humiliating, we are becoming a laughingstock.  A president who gets up at five in the morning and starts tweeting.

You know what Trump says about it?  Trump sent a tweet out just a little while ago this morning.  He said: “If the press would cover me accurately and honorably, I would have far less reason to tweet.  Sadly, I don’t know if that’ll ever happen.”  He’s exactly right about that.  If the press would cover him accurately and honorably, he wouldn’t have to tweet.  He’s tweeting to correct the lies and the dishonesty in the Drive-By Media about him.

We talked to him on this program about three weeks before the election. At that time he was tweeting a lot and reacting to every bit of criticism no matter where it came from.  And people on his side, his supporters and supposedly even some in his inner circle were saying publicly that they were trying to get him to stop doing this, that you can’t respond to every bit of criticism, just don’t do it.  All you’re doing is elevating it, all you’re doing is amplifying it.  Not everybody hears every instance of criticism, Mr. Trump, they were saying, just ignore it, move on.

I think this is one of the reasons why Trump’s supporters love him so much, and it’s one of the characteristics that not a lot of people comment on.  But people on our side — and by “our side,” I mean, conservatives, some Republicans — admit it, folks, we’ve grown tired and weary of being on defense all the time.  We’re tired of getting up every morning and looking at either a person or an idea, something that we hold dear under assault, like marriage, or who can use whatever bathrooms, we’re tired of being on defense, we’re tired having to defend things that shouldn’t need to be defended because they’re under assault.

Well, Trump is not on defense, folks.  We are on offense with Donald Trump.  And that’s one of the big invisible unspoken reasons why he has such loyalty is because people who support him are just like a lot of you in this audience, fed up with being on defense and being on a team that never fought back, much less went on offense.  But these tweets and this erratic or unpredictable behavior keeps Trump’s opponents on defense, and, believe me, it is a delight to see it.

Another thing that Trump is doing with these tweets, he’s leading.  And because he’s leading, he’s holding everybody’s attention.  What will Trump do next?  What will Trump do next?  Nobody’s asking, what’s Pelosi gonna do next, what’s Harry Reid?  You know, we’re not steeling ourselves for what assault is coming at us next.  We’re all looking on eagerly:  What’s Trump gonna do next?  How’s he gonna bamboozle ’em next?  How’s Trump gonna end-run ’em next?  That’s what’s everybody excited about here.

And it’s great to see people like Christiane Amanpour or Andrea Mitchell, NBC News, Washington, or any of these other Drive-Bys look like old men shouting, “Get off my lawn!” to Donald Trump.