Fake News About Us on WBZ Boston


RUSH:  Ladies and gentlemen, on WBZ-TV Boston, this program, you and me, have been defamed.  This program was portrayed on WBZ-TV Boston as fake news.  Well, that may not be the quite accurate way to say it.  The Boston CBS affiliate did a report claiming that I am getting angry calls, so many angry calls from you about Trump backtracking on promises that I felt compelled to push back.

KELLER:  Some in the Trump camp claim his supporters never really took those promises literally.  It’s the president-elect himself has been raising eyebrows by amending or outright discarding key pledges.

EBBEN:  Not everyone thinks that his voters are going to be okay with it.

KELLER:  Some of them certainly are not okay with it, Paula.  Rush Limbaugh has been getting so many angry calls on his radio talk show about this, he felt compelled to push back.  Check this out.

KELLER:  Not quite sure who “they” is.  I think it’s maybe us in the media. 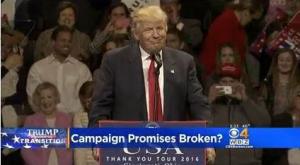 I’ve recently suggested that when it comes to news about Trump your first instinctive reaction is not to believe it, just don’t believe it, particularly if it’s from the New York Times.  Do not believe it, and then check it. It’s tough to do.  It’s tough to immediately — everybody wants to believe what they read no matter where it’s published. That’s the human nature tendency.

But that had nothing to do with angry callers.  That comment was about news stories that I had seen trying to drive a wedge between trump and his supporters by claiming that he was breaking promises and claiming that he was backtracking.  I have made it clear to people that it’s not time to have that kind of reaction at all.

Let’s go to the next sound bite.  This is last Wednesdays where I told you that Trump thinks the establishment is clueless.  Actually, let’s hold off on this because this actually goes with the Taiwan story, which I’ll get into here in due course.

But you wonder, somebody at WBZ-TV had to give them this idea, had to hear that excerpt of me not knowing that I was talking about the news media.  I wasn’t pushing back on Trump and Trump supporters.  Snerdley, check my memory here, you screen the calls.  Have we had any calls from angry Trumpists feeling like they’re being double-crossed out there?  All right.  I didn’t think so, either.