My Response to a Bernie Seminar Caller


RUSH:  Lawrence in Columbus.  Great to have you on the program, sir.  Hi.

RUSH:  Make sure, Mr. Snerdley, line one, you either get a number or make sure she holds on.  Yeah, what’s up, Lawrence?

CALLER:  I wanted to talk about the Carrier piece.  I needed your opinion.  First of all, I applaud Trump and Pence for getting it done through — you called it tax deferment — not deferment — tax relief.

CALLER:  And that’s great.  He said it, he did it, and he saved jobs, and he saved them domestically, and I think that’s the most important thing.  I also read somewhere in a story that talked about this that United Technologies, which owns Carrier, was concerned that Crazy Bernie Sanders was gonna introduce legislation that said if you were a company that shipped jobs overseas, you wouldn’t be eligible for government contracts, which is worth six billion to them.

CALLER:  I think Bernie’s nuts, but I think he’s right here.  I think he’s a hundred percent correct, and I wanted your opinion —

CALLER:  Why should you give government contracts to companies that leave this country and ship their jobs out? 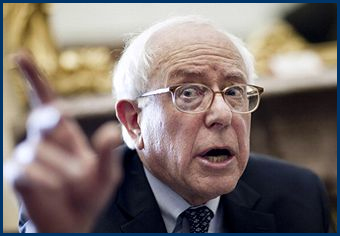 RUSH:  Man, oh, man, is my email popping.  “What do you mean, you don’t believe in punishing corporations?  What do you mean?  You just told that caller you don’t believe in…”  I understand how that sounded.  I had 10 seconds to answer the guy.  Let me explain what I meant.  This is about the Carrier deal.  We had a seminar caller right before the end of the hour. “Hey, I love what Trump did! Man, I love what Trump did.  It was great! It was great! It was great! But I really like what Bernie Sanders said.

“Bernie Sanders said if they send their jobs overseas and they’re a defense contractor and they get government money, you punish ’em and take the money away from them! Whaddyou think of that?  Whaddyathinkofthat?”  I said, “I’m not big on that kind of punishment ’cause that’s what Bernie Sanders wants to do.”  Bing!  Hour ended.  Let me explain.  This goes to overall corporate attitudes, as far as I’m concerned.  There are all kinds of people trying to figure out the intricacies of the Carrier deal.

Carrier has a parent, United Technologies.  United Technologies does business with the government.  And some of the speculation is… Like one of the email said, “Rush, what are talking about? Trump was gonna punish them! I mean, was he talking about tariffs on everything they brought back in the country.”  I understand that.  Trump’s telling manufacturers of automobiles and their products, “Fine, you take the jobs outed here and you build the product, you want the product to come back in, 35% tariff.  You’re not gonna be able to sell that product if you don’t make it here.”

People were pointing out to me that that’s punishment.  Another form of punishment is what the caller cited as the Bernie Sanders scenario, and it is if the parent of Carrier, United Technologies, does business with the government, and they’re threatening to leave, then you go in there and say, “Fine. You’re gonna leave? Then you’re also going to leave your government-related business here.  We are canceling all contracts with you.” That kind of leverage would be acceptable to a lot of people.  The tax relief that might have been on — which, there was tax relief.

That did not happen.  Carrier had leverage.  Trump wanted something.  United Technologies, in that circumstance, would be foolish to not try to get something.  They at least got the tax relief — which, as I say, roughly adds up to $700 a job.  There’s also the fact that United Technologies does have contractual relationships with the United States, and if Trump said to the CEO either at Carrier or United Technologies, “If you leave and if you take the jobs — if you shut down that plant — then you can say good-bye to the government contracts that we have with you.”

And if that kept Carrier here, if that was part of the decision making, then you might be saying, “Well, why didn’t Obama do any of this?  Where is the magic in Trump?”  And it might be a logical question.  If Trump was able to do this simply by pointing out the leverage that the United States government has, why didn’t the Democrats try it?  All during this campaign Trump’s out there saying he’s going to make sure Carrier doesn’t leave, ditto Ford Motor.  It would have been easy for Obama to pull the rug out from under Trump by simply going in and making this very deal with Carrier.

Maybe they didn’t think they had to engage in things like this because Trump had no chance of winning anyway so why burn political capital this way? Who knows, but they didn’t do it, and they easily could have.  They could have stolen this right away from Trump, if this is what’s happened. Trump and Pence went in there and trended United Technologies with the loss of existing government contract or browbeat them and bullied them but did not give them any tax relief… Whatever happened.

Trump went in there. Whatever the arrangements are, Obama could have done it, and in Hillary’s name, or Hillary could have done it with Obama. They could have had a credit-sharing arrangement, I’m sure.  Why didn’t they do it?  Anybody have an answer? (interruption)  Snerdley?  Have an answer?  Why didn’t they do it?  If it’s this easy, why is any company leaving?  If all you’ve gotta do is bully ’em, threaten ’em with, say, a tariff or with yanking their government contracts away from ’em or not offering them tax relief.

Corporations are not people.  Citizens United.  They hate and despise it, unless they can find some crony arrangement with the CEO of a particular corporation. I mean, look at their enemies list.  Their enemies list is every successful American industry, not just individual companies.  They hate Big Oil.  They hate Big Pharmaceutical.  They hate Big Retail, Big Auto. All of these big industries they accuse of destroying the climate or of killing their customers or not caring about the health and welfare of their employees or what have you.

So a guy like that or a woman like Bernie Sanders, Hillary Clinton, in charge of corporate health? I don’t think so.  A guy like Trump who believes in corporations, who understands them because he is one — understands their motivation, understands the leverages that he has with them — does not want to harm them, does not want to put them out of business… Unless they’re direct competitors, of course, then it’s a different. But as president, he can’t engage in that anyway.  So attitudinally, these things matter to me.  I’m not copping out on the answer.

I’m honestly asking: If any of these arrangements I’ve described are what happened to save the jobs at Carrier, why didn’t Obama do it?  Trump’s been talking about saving the jobs at Carrier for a year and a half.  Do you realize…? I mean, they’re trying to tell you that it’s easy. It could have been done. Anybody could have done it! Trump went in there and did it. Why didn’t Obama do it?  If it’s this easy, if it’s a matter of threatening the loss of government contracts, if that’s all it takes to keep a company for relocating to Mexico — and if Obama had done it — can you imagine the effect on the Trump campaign?

What would Trump’s answer have been?  And then Obama goes off and meets with Ford and does the same thing. Why didn’t that happen if it’s this easy?  Don’t tell me they’re not crafty enough to pull it off.  Well, if you… Look, if somebody has an answer for me I’d be more than happy to hear it.  But the bottom line is, what does everybody know? At the end of all this, the news is: Carrier is not moving jobs to Mexico.

And the only guy that was talking about making that happen was Donald Trump. So Donald Trump just ends up getting the credit for saving a thousand American jobs, and he’s not even president, and that’s the story.  Now, you can go on and on about the machinations of it and the intricacies of it, but you’re not gonna get people to pay attention, ’cause that’s not what they’re gonna hear, because nobody else did it.  And nobody else tried.  Only Trump was talking about it, and it looks like only Trump and Pence tried.  So Trump’s gonna benefit from this no matter what you naysayers want to try to make of this.