Did You Hear Newt Rip Mitt?

RUSH: Have you seen Mitt Romney being trashed by Newt Gingrich? You haven’t seen this? Man, oh, man, this is… it’s funny, it’s fascinating, it’s curious, it’s a number of things. Newt Gingrich is really, really bugged that Trump is paying any attention to Romney whatsoever. Newt is calling Romney a suck-up. He’s ripping Romney for sucking up to the president-elect.

Newt was on the radio the other day with Laura Ingraham. He said: “There’s a scene in Pretty Woman where Richard Gere goes up to the salesman on Rodeo Drive and says: ‘We need a little sucking up here.’ You have never, ever, in your career seen a wealthy adult who is independent, has been a presidential candidate, suck up at the rate that Mitt Romney is sucking up.”

That is upsetting a bunch of people. Some Never Trumpers don’t like what Romney is doing simply because they looked at the Romney as their quasi-leader, the holdout here from the establishment resisting the allure of Trump. And now Romney has apparently thrown all of those criticisms aside and wants this job so bad. That’s what Newt is saying. 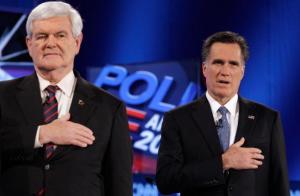 “‘He could say: “Ahh, Mr. President-elect. This would be the perfect meal for you,”‘ Gingrich said. ‘Something like maybe escargot, maybe pheasant. God, I’d love to have been there as a fly on the wall.'” Do you remember, folks, when it was learned that Newt had a $500,000 line of credit at Tiffany? He did. And what some of the critics are saying here is, “What is Newt talking about? Newt’s acting like he’s not an insider? Newt’s acting like he’s an anti-establishment guy when he’s been part of the Republican establishment for who knows how long.”

But I do remember Newt caught holy hell from the Drive-Bys. He bought his wife a half a million dollars’ worth of jewelry at Tiffany back in 2006. I remember we defended him back then. “It’s his money; he can spend it however he wants. If he wants to have a $500,000 line of credit at Tiffany, go for it,” which he did.