The True Story of Thanksgiving

RUSH: The Real Story of Thanksgiving is a tradition on this program.  I have to tell you, the holidays anymore, I am just overwhelmed with so many different emotions.  I have the… This is my favorite time of year, starting now and going through Christmas.  I just absolutely love it. It’s because of my childhood and memories of my childhood, and being in Sacramento and Pittsburgh, and then moving to New York in 1988, and my mother and father passing away.  It’s nostalgic to the hilt.  Nostalgia reminds you of the good times.

But now it has become guilt laden because I can’t be everywhere.  I’ve got family all over the place, and they are all, “Are you coming here for Thanksgiving?”  “I’m gonna try.”  “Everybody hopes you can make it.” And then another: “Are you coming here for Thanksgiving? You haven’t been here in two years.”  “I’m gonna try.”  “Everybody’s hoping you can make it,” and you can’t be everywhere.  I end up feeling guilty.  I’m sitting here feeling guilty right now! (sigh)

But “The True Story of Thanksgiving,” written about in Chapter 6 of See, I Told You So, which is book two. It’s the chapter titled “Dead White Guys, or What the History Books Never Tell You.”  And, by the way, this chapter and this story served as the foundation for the first book in the Rush Revere series, which was Rush Revere and the Brave Pilgrims, where, in addition to The True Story of Thanksgiving, we have the true story of the Pilgrims, who they were, where they were.

Why they risked everything to get on a rickety little ship and travel the Atlantic Ocean to a place that was foreign and unknown. They had no idea what they would encounter.  And it was all for religious freedom.  And the real story of Thanksgiving, I wasn’t even taught it, and I was in grade school in the late fifties and early sixties, and I wasn’t even taught.  I was taught that Thanksgiving was about the Pilgrims being saved from starvation and deprivation by the Indians, and learning to grow food and thanking the Indians for saving us, the Native Americans.

Everybody was taught this, but it’s not true.

“The story of the Pilgrims begins in the early part of the seventeenth century … The Church of England under King James I was persecuting anyone and everyone who did not recognize its absolute civil and spiritual authority. Those who challenged ecclesiastical authority and those who believed strongly in freedom of worship were hunted down, imprisoned, and sometimes executed for their [religious] beliefs,” in 1600, England, the 17th Century.

“A group of separatists first fled to Holland and established a community. After eleven years, about forty of them agreed to make a perilous journey to the New World, where they would certainly face hardships, but” at least the promise was, “could live and worship God according to the dictates of their own consciences.”  It’s a powerful belief, the belief in freedom of religion to engage in this kind of activity in order to be able to do it, to be able to cross an ocean to a place where you have no idea what to expect.

“On August 1, 1620, the Mayflower set sail. It carried a total of 102 passengers, including forty Pilgrims led by William Bradford. On the journey, Bradford set up an agreement, a contract, that established,” essentially socialism, “just and equal laws for all members of the new community, irrespective of their religious beliefs. Where did the revolutionary ideas expressed in the Mayflower Compact come from? From the Bible. The Pilgrims were a people completely steeped in the lessons of the Old and New Testaments.

“They looked to the ancient Israelites for their example. And, because of the biblical precedents set forth in Scripture, they never doubted that their experiment would work.” They were people with incredible faith. “The journey to the New World was a long and arduous one. And when the Pilgrims landed in New England in November, they found, according to Bradford’s detailed journal, a cold, barren, desolate wilderness. There were no friends to greet them, he wrote. There were no houses to shelter them.

“There were no inns where they could refresh themselves. And the sacrifice they had made for freedom was just beginning. During the first winter, half the Pilgrims — including Bradford’s own wife — died of either starvation, sickness or exposure. When spring finally came, Indians,” the Native Americans, indeed, “taught the settlers how to plant corn, fish for cod and skin beavers for coats. Life improved for the Pilgrims, but they did not yet prosper! This is important to understand because this is where modern American history lessons often end.”

That’s where the traditional story of Thanksgiving ends: The Indians helped ’em and they learned how to plant corn, had they had a big feast, and that’s what we celebrate today.  No!  “Thanksgiving is actually explained in [way too many] textbooks as a holiday for which the Pilgrims gave thanks to the Indians for saving their lives, rather than” what it was. Thanksgiving was “a devout expression of gratitude” to God — and if you doubt that, go look at George Washington’s first Thanksgiving Proclamation, when Thanksgiving became a national holiday because of George Washington. 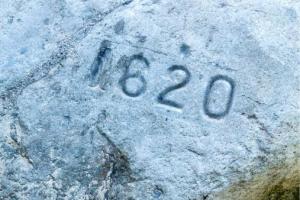 “Nobody owned anything. They just had a share in it. It was a commune, folks.” It was a Humboldt, County, California, commune — minus the weed.  “It was the forerunner to the communes we saw in the ’60s and ’70s out in California,” with organic vegetables. “Bradford, who had become the new governor of the colony, recognized that this form of collectivism was as costly and destructive to the Pilgrims as that first harsh winter” after settlement. He decided to take bold action. Bradford assigned a plot of land to each family to work and manage,” and it was theirs.

Whatever they produced was theirs to do whatever they wanted. Sell it, keep it, use it, but it was theirs.  Well, you know what happened.  This was, in effect, the unleashing of the power of competition and the marketplace.  The “Pilgrims had discovered and experimented with what could only be described as socialism,” and it failed miserably. “It didn’t work!” Drastic action taken by William Bradford got rid of it. “What Bradford and his community found was that the most creative and industrious people had no incentive to work any harder than anyone else,” because no matter what you produced, you got the same as anybody else.

“For this community [so far as it was] was found to breed much confusion and discontent, and retard much employment that would have been to their benefit and comfort. For young men that were most able and fit for labor and service did repine that they should spend their time and strength to work for other men’s wives and children without any recompense…'” What he’s saying is, “Why should we bust our ass working for people not doing anything?”  It didn’t work.  It was a resounding failure.  “Why should you work for other people when you can’t work for yourself?”

From his own journal.  The Pilgrims found that people could not be expected to do their best work without insensitive.  “So what did Bradford’s community try next? They unharnessed the power of good old free enterprise…” They let every family have its own plot of land to work and they were permitted to market the products, the crops that they grew, and the result was, Bradford wrote, “This had very good success.  For it made all hands industrious, so as much more corn was planted than otherwise would have been.”  I have to take a break, but you can see where this is going.

I’ll finish it up when we get back.  Don’t go away.

RUSH:  So the result of free enterprise after the Pilgrims had tried socialism, well, William Bradford wrote about it. “This had very good success, for it made all hands industrious, so as much more corn was planted than otherwise would have been.”  Bradford doesn’t sound like a committed leftist, and he wasn’t.

So the Thanksgiving that was had: “Pilgrims found they had more food than they could eat themselves.  Now, this is where it gets really good, folks, if you’re laboring under the misconception that I was, as I was taught in school. So they set up trading posts and exchanged goods with the Indians.” 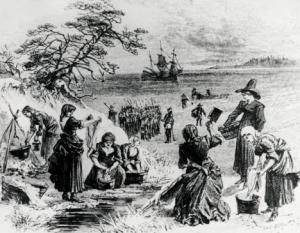 “The success and prosperity of the Plymouth settlement attracted more Europeans and began what came to be known as the ‘Great Puritan Migration.'”  In other words, the Pilgrims had such overwhelming success at growing their community, word spread all the way back to England, and it began this humongous migration of people.

Remember, the Pilgrims preceded the founding of the country by hundreds of years.  They really were the ones that got it started and showed how it could be done.  And it was — I don’t want to use the word “rich.”  It was so plentiful, this was what they were thankful for.  They thanked God for the guidance found in the Bible for restructuring their community, and shared their bounty with the Indians, who did teach them how to do things they didn’t know how to do, basically be farmers.  That’s The True Story of Thanksgiving.