RUSH: Try this.  “Denver County’s sheriff office has been slapped with a fine by the Department of Justice (DOJ) because it refused to hire non-citizens as deputies.” Read that again.  “From the beginning of 2015 through last March, the Denver Sheriff Department went on a major hiring binge, adding more than 200 new deputies.

“Kirkland Woman Fabricated Sexual Assault Because She Was ‘Distraught Over Election’ — A woman from Kirkland, Washington[,] has admitted that she lied and fabricated a story of sexual assault, claiming that she did so as she was ‘distraught over the recent election.'” Kirkland is outside Seattle.  “According to statement from Kirkland [police], a concerned citizen contacted Kirkland Police Department after they saw a Facebook post from a woman claiming that she had been sexually assaulted and that the police had responded to the assault but chose not to continue an investigation into the case.  …

“Police officers located the unnamed woman at her workplace where when confronted, she admitted that she had fabricated the entire claim. There had never been any assault and she had never called Kirkland Police Office to report a crime. The reason the woman gave for posting the false allegation to Facebook was that she was ‘distraught over the recent election.'”

Yeah? From the election or the burns?

From the Fox News Washington affiliate: “Swastika Spray-painted at Vietnam Veteran’s Home in Silver Spring — A 77-year-old Vietnam veteran’s Silver Spring home was vandalized over the weekend after a swastika was spray-painted on his front door, police say.”

From Campus Reform: “University of New Hampshire professors calling for the expulsion of two students who counter-protested an anti-Trump rally while wearing Harambe and Richard Nixon costumes.”

Harambe?  They showed up as a gorilla? “Courtney Marshall, a former UNH professor, posted a photo of the two students who are called to be expelled on her Facebook page, writing, ‘There was a walkout yesterday at my former institution (UNH), and these two people showed up.'”  Special kind of stupid.  Folks, I would almost say a near insanity has taken over the left.  In fact, it may be a practical insanity. 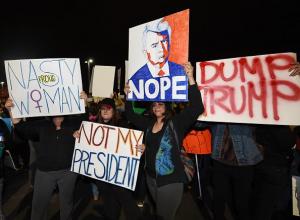 We cannot power over half of our needs, almost 80%, without fossil fuels.  What is inevitable is the continued use of fossil fuels as the fuel of the engine of democracy and freedom.  That’s what’s inevitable.  We just discovered one of the biggest deposits of oil, shale oil in the world in Texas.  Years and years and years of oil, fossil fuels, at our disposal now without having to buy it from the Saudis or anybody else.

What is inevitable is the continuation of the internal combustion engine, the jet engine and technologically made improvements on both.  What is inevitable is the continued use of coal and oil because they’re the only things that can fuel economic growth.  Renewable energy, green energy, wind energy, solar cannot do it!  Nothing wrong with getting into it, but don’t lie to people and tell ’em it’s the future.  Don’t lie to people and tell ’em that fossil fuels will destroy the planet.  Don’t lie to them and tell ’em that if they don’t find a way to get to Mars in the next 30 years, they’re gonna die, but that’s exactly what’s happening. 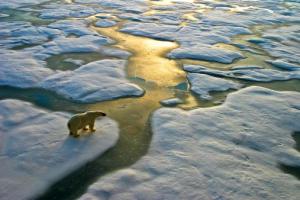 So many ill-educated young people haven’t the slightest idea.  They see oil as nothing more than dirt and gunk that is destroying the planet.  And they’ve seen it from the earliest days of their Saturday morning cartoon watching Captain Planet, then they go to school, they hear more propaganda like this.  So the EPA chief says that Trump cannot halt U.S. shift to clean energy.