RUSH:  Well, anyway, great to have you with, Margaret.  How you doing?

CALLER:  I’m great.  Thank you for having me.

RUSH:  Margaret’s one of my all-time top 10 favorite female names, by the way.

CALLER:  Well, thank you.  I appreciate that.

RUSH:  No, no, I’m not kidding you.  Kindergarten kids are being — I don’t know what you call it, propagandized, indoctrinated.  It’s not a direct thing. The teacher talks about how wonderful Hillary Clinton is, will show them pictures, might have some, you know, unkind things to say about Trump.  It’s subtle, but it’s happening —

CALLER:  Oh, no, I totally agree with you. I just find it very disturbing because I guess I was naive in thinking that elementary school would be okay and that wouldn’t start until perhaps middle school. 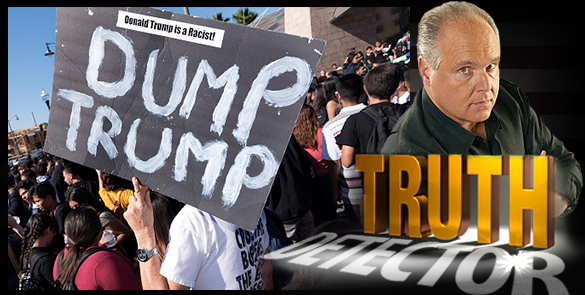 RUSH:  Well, here’s what I would do if I were in your shoes.  And keep in mind I’m not.  I don’t have children.  I’ve got nephews and nieces, but I haven’t had anything to say about how they’re raised ’cause that’s the way it is.  But if I were in your shoes, kindergarten, I’d get ’em out of there. I wouldn’t put up with it. I’d take ’em somewhere else.  The problem when you get to junior high and high school, then you’re dealing with grades.  If you’ve got evidence that a teacher is really, really not even teaching, but just preaching a bunch of drivel to your kid, the danger is if you report the teacher, you fear they’re not gonna get rid of the teacher and the teacher is gonna hear about it and take it out on your kid and not give them a good grade.

RUSH:  So you worry about what to do. Plus whatever you’re trying to teach them at home is being countermanded and undone while they’re at school.  And teachers are authority figures and people respect them and people, you know, kids think that teachers know everything, that’s why they’re teachers.  So it’s a direct challenge to what you’re teaching them at home.  Kindergarten, I don’t think there’s any question, get them out of there.

RUSH:  There’s nothing on your kid’s kindergarten record that’s gonna hurt them getting into a college down the road or what have you.

RUSH:  Hang on.  I got another break coming up here, Margaret, just one more thing, and I want to get your reaction to that, too.  So don’t go away.

RUSH:  The New York Times single-handedly, because they set the agenda for the other new agencies.  Whatever is in the New York Times, you can make book on the fact that that’s what CNN is gonna arrange panels to success and MSNBC.  The New York Times every day is what determines what cable networks also think is news and go out and analyze and cover.  Everybody on the left believes it.  It is dangerous.

There is not going to be one iota of cooperation. There’s not gonna be one bit of slack granted to the Trump administration.  Their purpose is going to be to get Trump out of office as soon as they can, either via impeachment or scandal or what have you.  They’re not going to stop.  And, as such, the rest of the media, that’s gonna be the agenda, get rid of Trump, paralyze Trump, stop Trump.  Not unify, no magnanimity, not coming together, not realizing how their audiences are shrinking and their advertisers are — no, no, no.  That won’t matter.

Because what’s going on now is that the Times must flex its muscles.  The Drive-By Media has got to demonstrate to itself that it still has the mojo to shape majority public opinion.  Everybody on the left is paralyzed today in fear and anger because they realize the last eight years have been an illusion, something not true, this majority America switching away from our founding into socialism and whatever you want to call it. It wasn’t happening, it didn’t happen, a revolution they thought they were transforming and leading wasn’t happening.

In fact, they were creating the biggest backlash to socialism that we’ve seen in this country.  So now they’re obsessed, I’m telling you, and your kindergarten teacher, Margaret, is one of the type of activists.  Your kindergarten teacher is not maybe a leader in this movement, but she certainly is going to pay homage to whatever others who think like she are encouraging her to do, advocating her to do.  If it were me, I would get my kid out of that kindergarten.  You don’t need —

RUSH:  You’re gonna have enough pressure when the child gets older.

RUSH:  But this is destroying formative years that you are trying to establish, your definition of —

RUSH:  — morality and right and wrong, good and evil, all these things that you’re trying to teach her is being undermined.  If it really is.  You’ve got to get her out of there.

CALLER:  Yeah.  Yeah.  Well, fortunately I am very blessed to be a stay-at-home mom and wife, and I have three young children, and I’ve tossed around the idea of homeschooling, so I think I’ll definitely look into that more —

RUSH:  It’s an expanding community.  We’ve gotten to know, those of us at Rush Revere, Time-Travel Adventures with Exceptional Americans, have gotten to know the homeschool crowd exceptionally well.  They are —

RUSH: — I mean, the salt of the earth people.  They have the same concerns you do.

RUSH:  They simply don’t trust the public education system. They work as hard as they can to shape their kids and teach ’em what they think they need to be taught, send ’em off to school, come home and they don’t recognize ’em and they just don’t want to put up with that.

RUSH:  Look, before I let you go, I didn’t have time to ask you yesterday, would you like a new iPhone 7 or 7 Plus?

CALLER:  Oh, I would love that.

RUSH:  I knew you would.

CALLER:  That would be great!

RUSH:  Which size?  The iPhone 7 or the Plus?  The Plus is the bigger screen, five-and-a-half inches.

CALLER:  Well, I think you said for Verizon you only have the Plus right now, right?

RUSH:  Yes.  You very attentive.  Are you Verizon?

RUSH:  Well, then, yes, I’ve only got large. I gave away the last rose gold 4.7-inch iPhone 7 yesterday.

RUSH:  So which color, black or black?

CALLER:  Black is fine with me.

RUSH:  Okay.  Then you hang on, and Mr. Snerdley will get your address and we’ll FedEx it out to you.

RUSH:  Thank you, Margaret, for letting us call you back.  Look, on this phone business, folks, one of two things I could do here.  Apple switched things up.  Normally every year the iPhone that works on the T Mobile or AT&T network is also the world phone, meaning when it’s unlocked, it’ll work on any carrier in the world except for a few in China.  So when it came time my stock is all — well, largely AT&T phones in there of iPhone 7 and 7 Plus.  And then I learned after the fact that it’s the Verizon phone this year that’s the world phone and that the AT&T phone only works on AT&T and T Mobile.

And it has to do with the way Apple wanted to diversify their explain supply chain.  There are two companies that make LTE modems for the iPhone.  One is Qualcomm, and the other is Intel.  And this is Apple’s first year at using Intel.  They like to have more than one supplier for parts in case something happens to that supplier and also let’s ’em pit those suppliers against each other so they can get better prices from them.

Well, the Intel LTE modem doesn’t work on Verizon.  So all AT&T, T Mobile phones, the GSM network phones, have the Intel LTE modem and only work on AT&T and T Mobile.  The Verizon iPhone have the Qualcomm modem, and the Qualcomm modem works on everything.  The Verizon phone this year is the world phone.  That’s the CDMA network, but it’s also GSM.  So if you get a Verizon phone it comes to you unlocked and it will work on any network.  But I don’t have any iPhone 7s in the CDMA network.

I’ve been torn here, should I go out and stock up on a bunch of ’em, ’cause it’s hard to get ’em, I don’t know how long it would take to get ’em.  Meanwhile, I’ve got all these others.  I hate offering people things and then having to limit what’s available.  Bugs me.  But that’s the circumstance in which I find myself.  Fortunately, the ones I have are the creme de la creme, the best, newest iPhones made. The iPhone 7 Plus is just the finest iPhone, the finest smartphone ever to be made.  So there’s always that caveat.  Little icing on the cake.