RUSH: “Obama Will Not Call off Anti-Trump Protesters,” and stand by here on audio sound bite 13.  It was earlier this week or late last week where I attempted to calm the nerves of several who thought Trump was moderating a bit and they weren’t happy about it. As evidenced by his appearance with Obama at the White House, praising Obama as a great guy, saying he was gonna seek Obama’s counsel and his advice constantly during his own administration, blah, blah.

I warned everybody not to necessarily believe that because I had a theory about what was going on, and I do still have that theory, and I think it’s even more relevant and correct today, and it’s getting more dangerous.  The theory is that Trump knows that what just happened is a gigantic personal defeat and humiliation for many Democrats, including Obama.  It’s only Obama’s narcissism that gets in the way of him admitting his role in this massive defeat — and by saying massive defeat, his policies are repudiated.

Hillary’s election was the same thing as his reelection, to continue what he had done — and it was sent packing.  And my theory was that we are at a very, very dangerous time because the left’s entire transformation of this country, in their minds, has been brought to a halt for the moment, and by virtue of a resounding defeat.  When you get to Obama, it’s personal, if the narcissism fades and he sees it.  But the next two months we are in a very precariously balanced set of circumstances.

Because while Obamaism has been rejected, Obama still controls all the levers of power, and if he wants to go out with a flourish, speaking politely — if he gets mad, if he gets an, “Okay, I’ll show them” kind of attitude — Katie, bar the door.  So I think that’s why Trump was not being provocative.  I think that’s why Trump of us being polite and adult and all, was just because he fully aware of the very dangerous nature situation in which we now find ourselves.  And I think I was highly prescient in telling you this, ’cause it’s starting to crumble now.

Obama is beginning to display — across the oceans, on foreign soil, he is now beginning to display — his pique, his anger, and his unhappiness and dissatisfaction with this.  And I didn’t think it’d be long.  I didn’t think he would be able to go along this magnanimous track for very long.  Obama won’t call off Trump protests.  He was specifically asked; he won’t do it.  In fact, he did the exact opposite.  He encouraged this, encouraged these people to continue doing this.

He is perfectly fine with all the chaos and as many obstacles being put in Trump’s way as he can and as there are.  All of this talk about magnanimity and coming together and smooth transition? I don’t think he ever meant it and I know for sure he doesn’t mean it now.  And if you still doubt me, I want you to listen to this.  This morning on CBS This Morning, the New Yorker magazine editor David Remnick, a leftist extraordinaire, highly arrogant and condescending to anybody not in his little clique of people.

And he’s one of these people distraught and in agony over this election. He can’t believe that the rubes and the hoi polloi and the idiots of this country actually triumphed. So he’s on there, and he’s being interviewed by Norah O’Donnell.  And she says, “That 90-minute meeting between Obama and Trump, you know, I think you’re the closest to a fly on the wall as we could get, Mr. Remnick.  So what did you learn about what happened inside the Oval Office in that 90 minutes with Trump and Obama?”

REMNICK: I asked him that, naturally, as any of you would, and he smiled, and he said, “Um, I’ll tell you all about it over beer off the record,” meaning for the moment now — certainly for the next couple months — he’s playing it close to the vest.  What I do know about that meeting is let’s just say that Donald Trump did not show himself to be any more sophisticated about policy than he seemed to be in the debates or in the campaign.

RUSH:  Wait a minute, wait a minute, wait a minute. It was all off the record? Nope, nope, nope. Not off the record.  So Obama told Remnick that Trump showed up unprepared, that he didn’t know anything, that he’s not sophisticated. He’s exactly who we thought he was.  This is not magnanimous, this does not promote unity, this is not anything about Obama helping Trump hit the ground running, this is not about helping a smooth transition. All that was BS poppycock, and I knew it was when I first heard them say it ’cause I know who they are. 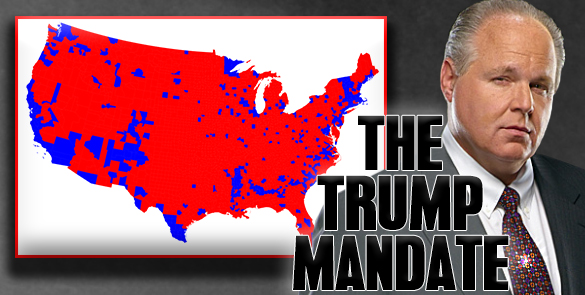 And then another story: “Obama Will Not Call off Anti-Trump Protesters.”

So this just some of the things out there that indicate I think we still are in a very precarious, dangerous time.  And the objective here of not provoking Obama and not gloating. That’s what magnanimity really means is not gloating.  Magnanimity doesn’t mean you let the losers come in and share power.  Magnanimity just means you don’t gloat, you don’t taunt.  I think Trump knows this.  Taunting these people right now would be… They’re not. They’re going the other way.  And I think actually that may even be part of what the you’ve heard this little trial balloon that Trump is meeting with Romney? We heard this yesterday.  Remember your reaction; you didn’t like it?  There could be something else going on with that than actually trying to fill a cabinet post.

RUSH: You know, not only… We can look at this, assess this honestly. I know the popular vote’s what it is.  But, my friends, despite this popular vote business, it may well be… We’re still not through counting yet. As we sit here right now, it may well be that the entire popular vote advantage Hillary ends up with (if she does end up with one) could be due exclusively to voters in California.

Which, if you get into it deeply, will highlight the real value and importance of the Electoral College.  Can you imagine a presidential election where only the voters of New York and California and Texas mattered?  I mean, those are the population centers, and if you have to win the presidency by virtue of popular vote, well, you gotta go where people live.  It would mean 80% of the country and their votes wouldn’t matter.  It’s one of the many aspects of the brilliance of the Electoral College.

I have spent the past two weeks detailing this, and people are continuing to write and comment on it themselves.  Larry Sabato has written a piece about this: “16. Democratic Losses in the Age of Obama –– With most 2016 results in … the damage is as follows: a net loss of 13 governorships, nine Senate seats,” it’s actually ten, “63 House seats, 949 seats in state legislatures, and 29 state legislative chambers.” There are only five states where the Democrats have the governorship and the state legislature.

This is the product of the massive landslide victory in 2010, the massive landslide victory in 2014 — the midterms — and the election a week and a half ago.  These losses are deep and profound.  And what it means is the Clintons are gone, the Bidens are gone, the Obamas are gone, and it may be that Pelosi is gone. Harry Reid is gone.  The depth of the Democrat defeat is massive.  Whether you want to look at it in context of a Trump victory or not, they have their own problems in the Democrat Party.

They have been rejected deeply and consistently, and it is their policies which have been rejected.  We now know that the last eight years we have been governed, as we suspected, by a minority — a minority of liberal Democrats pretending to be the majority with the help of the media and governing against the will of the American people.  So not only do we have Obama’s legacy of a massive policy fail, now he’s becoming a sore loser. He’s becoming such a sore loser they may want to put a sore loser wing in his eventual presidential library.

He’s having little Obama tantrums while overseas.  It’s a bad look.  He is actively — subtly but actively — undermining the president-elect.  That is real news.

RUSH:  There’s even more to the David Remnick interview.  Essentially Obama said that he doesn’t think Trump’s gonna be very successful in rolling back the Obama agenda.  Obama said that Trump will only be able to undo about 15 to 20% of his crap.  Well, Obama didn’t say crap.  I said that.  And the reason Obama said that’s ’cause the federal government is so bloated and it’s so bureaucratic that it moves so slowly that Trump’s not gonna be able to do even 20% of what he wants to do.

“You can’t do that. You can’t do that. That can’t be done. What are you talking about?  You want to really reverse that?  There is no way.”  I can’t wait for all of these, or a number of these to be blown sky-high.  You saw a story the other day, something, I forget the country — it might have been Japan — a sinkhole happened.  A sinkhole took out like a 30-foot, 30-yard section of a multilane highway, and they had it replaced and repaired inside of a month, up and running, ready to go.

And the counterpart of the story was something in America, a tiny, tiny little restoration project that took four years because of the environmental impact study and all the regulations and all the delays and all the graft, all the payoffs that you have to make to people along the way.  And it was a story unrelated to anything.  It was just — unrelated to anything at present in the news.  It wasn’t about the campaign.  It was just something that somebody decided to make a comparison.  It was profound.

I remember when the earthquake hit California and a segment of the Bay Bridge collapsed, and who was the — he’s passed away now, but there was a construction guy, a magnate down in Southern California, from Sacramento, C. J. something, and this guy was known for rebuilding construction projects on time, early, under budget.  That’s exactly what Trump is known for, by the way.  Getting things done, high quality, on time, under budget.  We’ll see.

I have a sneaking suspicion that all of these know-it-alls, these egghead academic know-it-alls who’ve never had any real hands-on, dirt-under-the-fingernails experience in life, sitting in their ivory towers pontificating on what can be done and what can’t be done, when they haven’t even tried, they just sit there in their regal brilliance and render judgments on everything and everybody.  I can’t wait until all this is just blown to smithereens, or a lot of it.