What Really Happened Inside the Trump-Obama White House Meeting?


RUSH:  I have a sound bite that I want you to hear here.  I want you to listen to her.  It’s from Gloria Borger at CNN, and it’s about the Trump-Obama meeting in the Oval Office.  The Oval Office meeting is a pro forma thing, a tradition. After the election, the president-elect shows up and is greeted by the sitting president and nothing really happens at these things.  I mean, it’s… Maybe… There’s even very little instruction on what goes where and where various rooms are. None of that. It’s just a pro forma thing to illustrate the transition of power being peaceful and all that.

And then they go out and they take photos, the current first family and the incoming first family.  Well, the Wall Street Journal had a report that Obama had canceled that photo-op.  That is the first bit of news we had. Actually, the first bit of news we had was the meeting did not last 15 minutes.  This one lasted 90.  So what normally is a 15-minute meet-and-greet, “Hi, how are you? Enjoy your time here ’cause I’m coming. See you later,” turned into a 90-minute meeting.

He said (paraphrased) “The president was really, really relieved, reassured by President-Elect Trump’s tone on Election Night,” calling for unity and magnanimity and getting along and kissy face and stuff.  And then Earnest said, “We at the White House are all rooting for Trump’s success in leading a united country.” (laughing) We’re rooting for Trump’s success in leading and uniting the country.  Now, under what circumstances…? Now, wait a minute.  Before you say, that’s not true. Before your reaction is it’s not true, you must ask yourself a question:  Under what circumstances would it be true?

If the White House is serious, and if Obama means it when Josh Earnest says, “We are rooting for Trump’s success in leading and uniting the country,” is Obama not admitting that it isn’t united and that he’s the president? So what…? For that to be true, what has to happen? What had to have happened? What must happen for that to be true? (interruption)  For the White House to say, “Our goal is to make sure Trump can hit the ground running,” what would make that true?  I’m just asking. Because I’m in a great mood today, I’m not gonna answer it.

Now, with that bit of background, let’s now go to Gloria Borger who is going to tell… (interruption) No, I’m not gonna answer that question.  I’m in a good mood.  I’m gonna laugh today.  I’m gonna smile.  I’m gonna be giddy.  We’re gonna be happy.  I don’t need to answer it.  That’s the beauty of the way I do things.  I have given you the answer without actually answering it.  Under what circumstances would it be true? Under what circumstances would the White House mean it when they say we want to make sure Trump can hit the ground running?

Wolf Blitzer said, “Gloria, I’m anxious to hear your thoughts about this meeting and what we heard.”

BORGER:  This conversation may have been a lot more substantive (snickering) than just a meet-and-greet.  I think President Obama had a few things he needed to say and to tell Donald Trump about what he has achieved, and what Trump needs to keep in mind as he talks about undoing every single thing that he has done over the past eight years.  I think this was the president’s moment to say to Donald Trump, “I know where you’re coming from, but let me just tell you a few things.”  And I think that it’s kind of stunning for these two people to meet face-to-face for the first time after they have been hurling insults at each other.

RUSH:  Why is it stunning?  This is what tradition says that you do.  Let me offer… Blitzer says, “Gloria, I’m anxious to hear your thoughts…”  And she said, “The conversation may have been…”  Well, let me offer my thoughts on what might have happened.  Can I?  May I?  With a smile on my face, can I tell you what you think might have happened in this 90-minute meeting that’s supposed to go 15?  It might have begun cordially and Obama might have started off in his arrogant, conceited way of telling Trump how things work and how things are.

He might have even said, “I really appreciated the way you grew that night, made your tone a little bit more adult.” At which time Donald Trump might have — in his own way — unloaded on Barack Obama for the hurl of insults that night at the White House Correspondents Dinner. And Trump may have schooled Obama on how dangerous it is to start accusing people of being supported by the Ku Klux Klan. And Trump may have schooled Obama on how these past eight years have wrecked this country and how damn difficult the job’s gonna be to put it back together — and don’t you dare try to get in my way as I try to fix it.

I’m thinking something like that might have happened in the 90-minute meeting.  Gloria Borger thinks that Trump walked in there like a puppy dog and that Obama — the brilliant academician and faculty lounge chairman — schooled Donald Trump on the basics of civility and humanity. And I’m thinking Trump went in there and told Barack Obama, essentially, “You have run the risk of really making me mad.  You have gone way out of the way.  You have been beneath the pale.  You have gone low. You have ridden dirty.

“And I am not the kind of guy that puts up with it and smiles and looks the other way just for the pro forma formality of this all.  And if you try to stop me at any time in the next four years, you’re going to regret it.” (interruption) With a little laugh? Well, yeah, with Trump, of course, smiling whole time ’cause he’s giddy and happy and can’t just wipe the ecstatic nature out of his very happy.  And then after that they have the meeting.  So obviously something would have had to be said.

Why couldn’t it just as easily be that?  Gloria Borger has her thoughts; I have mine.  And I’m not paid by the Democrat Party’s national committee, and I don’t call them to run my thoughts by them.  I don’t call anybody and say, “Hey, is okay if I say this?  Hey, what really went on in there?  Hey, would it be okay if I said that Obama really schooled Trump?”  “Yeah, yeah, fine.  Go for it.  We’ll cover you.”  That doesn’t happen here, folks.

RUSH: Here’s Trump and his remarks about his meeting with Obama, and I’m sorry, but the camera shutters are going nuts here.  Sometimes for me it’s hard to hear, but here it is. 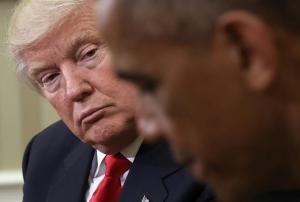 RUSH:  He said that Obama explained some of the difficulties, some of the high flying assets, some of the really great things that have been achieved. He said, “Mr. President, it was a great honor being with you and I look forward to being with you many more times in the future.  I look forward to your counsel.”  So that’s what Trump said.  Realize all this is pro forma, but that’s what — (interruption) Oh, I thought it was over. I was talking over it.  Trump said “very good man.”  Right.  Okay.  Well, then I guess my version of what went on in there is not correct.

Maybe Gloria Borger’s version is correct, that Obama told Trump the way it’s gonna be or else.  He’s a very good man. (interruption) He did what after he — (interruption)  Oh.  Oh.  Well, that’s true.  Trump did say that Cruz is a very good man and his dad, even though he was there with Oswald, was a good man and he said that Rubio was a good man and they have a great garden at the White House that somebody can dig up, didn’t Obama say that was gonna happen.  Yeah, that’s right, Trump was gonna dig up Michelle’s garden.  That’s right.  Anyway, it’s kumbaya.  That’s what happened.

Then Earnest went out there and said, yeah, we’re gonna do everything we can to see to it to see that Trump hits the ground running ready to go for success.  Look, folks, you know me.  I have never lost control of my ego.  If I had, you’d see me on TV all day.  I’m telling you, my ego’s in total — in fact, I don’t have much of one.  But I’m telling you that this business of me eight years ago saying “I hope he fails,” it is living rent free in their brains, and they are partly doing what they’re doing to counter that, to show that they’re better people than I am, I guarantee you.  Never be able to prove it, of course.