What Happened Last Night Was Obvious, But the “Experts” Didn’t Want to See It

Now the news networks are actually talking about opening bureaus in Macon and Racine, Wisconsin, for example, because it’s a foreign country to them.  The Midwest may as well require visas for these people to go visit.  This will only last for two weeks, by the way.  Every time the left loses, they’ll go through two weeks of apparent introspection where they will admit they’re out of touch and admit they miss things, and after two weeks it’s all over and they go back to their arrogant supremacy and superiority act and start impugning and criticizing and ripping to shreds everybody and everything that’s not them.

So enjoy it for these next two weeks while the game is played again, just like it was after 2002, just like it was after 2000, 2004, 2010, every time they lose, they go through this self-introspection for a couple of weeks, make everybody think that there’s learning and studying, and then they revert to who they really are, which is arrogant, contemptuous, and condescending of us.  Never more visible in the coverage last night.  They would not accept what was happening right before their very eyes, as Trump was winning.

And what was Trump winning?  This is another thing that bugged me last night.  First we go through the day and all we’ve got is exit polls, and they started treating the exit polls as gospel again because that’s what they do.  That’s all they know.  They couldn’t wait for the first polls to close.  Yes, they are counting down until seven o’clock for the first polls to close.  What happens at seven o’clock?  The votes start being counted.  There’s nothing to learn at seven o’clock in the states where polls close, unless you want to go by the exit polls and consider them gospel, which that’s all they’ve got, that’s what they do.

Well, the vote is done.  By the time polls close, a vote is done.  There’s nothing that can happen to change it unless there’s fraud.  So all you have to do is wait for the count.  But they treat it as though it’s still in progress and still malleable and still fluid and could still change.  No.  We’re just counting.  There’s nothing more that can happen after the polls close in a state.  You might be able to count the early votes if they haven’t been counted yet, maybe count the absentees, but a state’s vote is done when they close the polls and it is what it is.

You just have to wait.  And what goes on between the polls closing and the state announcing the results is nothing, excepting counting.  And yet that process of counting they keep telling us, “Look at Trump, is gaining ground.”  Trump is not gaining ground on anything until it’s over.  Hillary’s not losing ground until it’s over.  I know they got a TV show to do, they gotta have people keeping watching, they gotta keep people glued so they make it look like it’s a football game where you score here, other team comes back and scores.  That’s not how this happens.  After you vote, it’s over, they count, they report, and that’s it.  Unless there’s cheating, of course.

So in the midst of all that’s when we get this analysis of what’s really going on, and we learn as they start getting closer to the realization that Trump’s gonna win this, then they start showing their true colors.  “Well, you know, Trump’s gotta reach across the aisle. Trump’s gonna have to make amends. Trump is going to have to send us an olive branch.”

The Democrat Party was told to go take a hike.  The agenda of Barack Obama was told to go take a hike.  It was specific.  People voted against what is happening in the country.  They don’t like the direction the country’s going.  The crowds at Trump’s rallies were real.  They were based on issues.  Trump was substantive.  These people never took the time to actually listen to what Trump was saying.  They were too busy being offended that Trump was saying offensive things about people and protected groups because of political correctness.

So they never even really took the time to listen to what he was saying.  They’d already made up their mind he’s a bigot.  They already made up their mind he’s gauche and boorish and embarrassing, and it never bothered them an iota that they never really knew what he was saying and standing for, and that’s why they’re shocked last night and today.  They can’t understand it.  They can’t understand why this country would vote for such a reprehensible scum human being.

This has always been a nation of doers.  This is a nation of people who can and want to do.  They don’t want to sit around and be among the 94 million not working.  They do not want to have to view their government as Santa Claus.  It was clear as a bell what happened last night.

Big Government… This was an ideological outcome last night, much as the left and the Drive-Bys would try to tell you it wasn’t.  “Well, it’s an up-or-down election, Mr. Limbaugh.  It wasn’t left or right.  There was nothing left or right.  We’re so past ideology.”  No, we’re not beyond ideology at all because the left is purely and totally ideological!  All they are is a bunch of community organizing left-wing rabble-rousers.  There’s no up or down about them!  There is nothing but far-left and further-left, and so far left they’re out of sight. 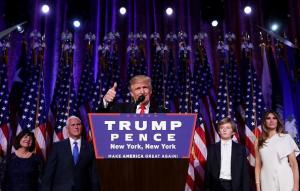 Liberalism, Big Government, whatever you want to call it, was told to take a hike.  The policies of Barack Obama… Name them: Obamacare, the Iran deal, open borders, immigration, everything.  It was as specific an election outcome as I have seen in my life.  Nothing nebulous here. Nothing hard to see. Nothing hard to figure out.  It’s right in front of everybody’s eyes.  Some people just don’t want to see it, or they do see it and they’re scared to death and want to try to make it about something else.

RUSH: One thing I got sick and tired of hearing last night. It was this: “Massive Hispanic turnout.”  I heard this all over Fox. I heard it everywhere I turned, this massive turnout — while the votes were being counted, before not anywhere near all of them had been counted.  And, of course, the intermittent count doesn’t mean anything. It doesn’t mean anything ’til you get to the final number.  But every intermittent increase or decrease for Trump we were greeted with, “Well, this is what happens. 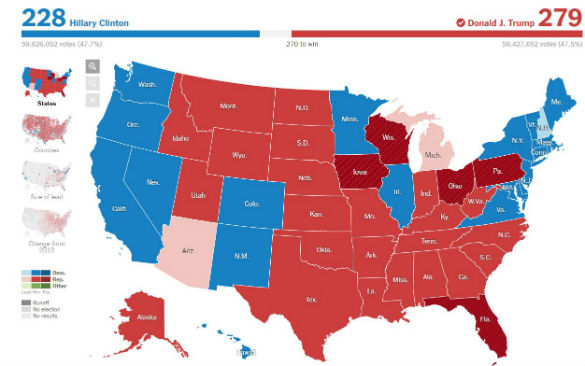 “We’ve been telling the Republicans for years there’s a massive demographic shift: Fewer and fewer white people, more and more Hispanics! The Republicans are not getting on board. This massive Hispanic turnout in Florida, in North Carolina. Massive early voting Hispanic!” Trump didn’t have a prayer all night long because the Republican Party hadn’t seen the future.  Everybody who said that has egg on their faces, and they’ve been wrong about it for eight years.

One thing we can say for certain: Donald Trump didn’t reach out to Hispanics to win this election, and he won the election.  He didn’t reject them; he went to everybody.  He treated people as human beings.  We’re all Americans.  We have similar values because we’re Americans.  It doesn’t matter what our skin color is or gender or orientation.  That’s why he won.  He didn’t group-ify things, which is what both political parties have become.  And that means they have a different message for each group.

Which means you don’t end up knowing what either party really stands for, unless you are really studying this and happen to know. And I happen to know what the Democrats stand for and I know what the Republican Party is doing.  And then there was another one that shot up.  This one started… Juan Williams was the first I heard say this, and then we got the sound bite roster today and I found there’s a whole montage of it.  And it goes something like this:  “Well, people might have disagreed with Hillary Clinton, but no one was afraid of her like millions are afraid of Donald Trump.”

Well, you know what that is? That’s a carryover from some of the erroneous coverage of Trump from the beginning of this campaign, the attempt to stereotype and stigmatize and impugn Trump, just like they do everybody who is either a conservative or a Republican or not a liberal and not a Democrat.  Let me tell you something.  I have been afraid of Barack Obama since he was inaugurated.  I was afraid of Obama during the campaign.  I was afraid of Hillary.  I’m afraid of what they’re gonna do to the country.

I’m afraid of not being able to stop it!

What do you mean, nobody’s afraid of Hillary Clinton?

What do you mean, “Nobody’s afraid, they just disagree”?

I can give you about how many tens of millions of people last night that were afraid of Hillary Clinton and wanted no part of a Hillary Clinton presidency coming on eight years of Obama’s! But, “No, no, no, no.  No, people just disagree with Hillary. She’s a fine, nice woman, but people are afraid of Trump.”  I just… You know, part of the fun of winning is watching these lame excuses the leftists come up with to explain why they lost — and they never, ever, are honest with themselves.  Their ideas get rejected every time they end up being on a ballot.