We Have Not Lost Our Country

RUSH:  And greetings to you, music lovers, thrill-seekers, conversationalists all across the fruited plain, Rush Limbaugh, documented to be almost always right 100% of the time.  A new special opinion audit in from the Sullivan Group in Rancho Cucamonga, California.

Man, there is so much to say.  There are so many vibrantly great feelings to share.  We have not lost our country.  It might even be fair to say we really weren’t even that — well, we are close, we’re close.  But we have not lost the country.  We learned also that it was not necessary to go through these past eight years.  I don’t want to rewrite history, but my point here is that the Democrats can be beat if they are approached in the right way.

One of the problems that we have had to endure as voters and as citizens is that our party has not believed that.  Our party has not believed the Democrats can be beat, and Donald Trump has shown how to do it.  It took a political outsider, somebody with no fingerprints on anything to do with the way Washington works, quote, unquote, demonstrates how you beat an opposing political party.

How many times I’ve shared this story with you.  I’ve had Mitt Romney come to my studio. I’ve had Rand Paul come to my studio. I’ve had Republican presidential candidate after candidate come to this studio and talk to me about their campaign, their ideas, how they want to go about winning, and each one of them, I’ve not mentioned all the names, it’s not important.  They all believe it and they all told me, “We can’t win, Rush, with Republican votes alone.”

And I look at them, “What do you mean we can’t win with Republican –”

“No, no,” I said, “You guys are going about this the wrong way.  All you need to do is approach the American people as citizens, as the American people.  To hell with what group they’re in.  We’re human beings.  We all want the best for ourselves and for our country.”

Now, the opponents don’t look at life that way.  They do look at people as victims and members of groups.  But we can beat them.  I’ve always known we could beat them.  And my point, folks, my purpose here, people have asked me, “Why are you still doing this after 29 years?”  Beating the left has always been what this is about. In addition to whatever I must do in the realm of broadcasting in order to succeed, the substance and the content portion of this program has always been, whether it’s been humor, whether it’s been satire, whether it has been serious commentary, it has always been about beating the left.

For 29 years, that’s what this program has been about.  And I have never understood, and I do not understand people on our side who do not believe that, who do not hope that, who do not also share that sentiment — and, furthermore, who don’t think it’s possible.  We have been validated. The things that we feel and think about our country, the direction it was going, we have been validated by virtue of what the American people did yesterday.  Now, I have made notes throughout the night as I was watching the various cable networks and their coverage.

And I’ve thought about, how do I want to approach this day with you today, because really there’s so much to say, and there’s so much to share, and so many observations that I want to make.  I thought, “Okay, well, maybe I can just do my stream of consciousness and share with you note by note as I make them,” or maybe try to come up with some more organized presentation of things, or just react as things happen as the program is taking place today.

And I figured that regardless of the approach that I take, I’m gonna get it all said. Regardless in what format I design it and present it, it’s all gonna be said.  It may take three days or three hours here today and a couple hours tomorrow to get it all said, because there’s a lot. There’s a lot to react to. There are so many teachable moments that have occurred in this entire campaign, and there is so much uplifting and positive about what happened.

There is so, so much that is beautiful and American and Americana that is still worth believing in and still worth promoting and still worth fighting for, and all of this was demonstrated last night.  If we want, we can go through the motions and feeling schadenfreude.  We can feel comfort in the misery of others.  And, by the way, they are everywhere.  They are not just on the Democrat side.  There’s a lot of unhappy people on our side here for a whole host of reasons.  There have been… So many people were wrong.

So many experts were so wrong about everything they said.  So many people were right at the same time. And I do want to try to unpack all of it, and we have some audio sound bites that are gonna help me in terms of bouncing off things that others have said.  We’re gonna get your phone calls in on this.  I know you’re chomping at the bit.  That telephone number is 800-282-2882, and if you want to send an email — we check those — it’s ElRushbo@eibnet.us.  I see the stock market’s up about 170.

What? I thought last night when we went to bed, they said, “It’s gonna plunge 900 on the opening bell.” The Dow futures were down 900.  There are some interesting things to ponder.  All these people that donated gazillions of dollars to Hillary and Bill’s foundation — buying policy, whatever they thought they were getting by donating to Hillary — what do they do now? Do they want their money back?  What are they gonna get for it?  Do you realize the angst that there must be?  You can see it; you can feel it.

The angst, the shock, the disappointment over the entire Democrat Party, the entire left wing, and even some on our side.  One of the things I kept hearing last night… You can always learn, folks. The media will always be predictable.  The Democrats will always be predictable.  When it was finally clear last night that Hillary was gonna lose, they began to demonstrate who they really are, started talking about how it’s gonna be necessary for Trump to approach them.

Trump’s gonna have to reach out to them. “Trump’s gonna have to be inclusive. Trump’s gonna have to do this!”  Trump doesn’t have to do anything!  He probably will.  Trump is the winner.  Trump won.  If Trump wanted to, he could play this the way Obama did. (impression)  “I won!  And whatever you want to do, well, you’ve just gotta stop listening to that Rush Limbaugh guy. That’s not how things get done in Washington.”  That’s what Obama said two weeks into his administration to a bunch of Republican leaders.

It’s important to point out. I was listening to Paul Ryan today. It was a new Paul Ryan.  He went out and spoke before Hillary did.  I’ve never seen Paul Ryan this enthusiastic! I’ve never seen Paul Ryan this optimistic.  He was genuinely optimistic.  He was enthused, and he seemed surprised at the same time.  Donald Trump heard a voice out in this country that no one else heard.  A lot of people heard it.  A lot of people are that voice!  People didn’t have to hear it; we have been shouting it!  People who missed the voice didn’t think it was there.

It’s not that they didn’t hear it; it’s that they didn’t think it was there.  If there is a lesson for the GOP, this victory has been there all along. You could have this victory in 2008.  You could have had this victory in 2012.  But it’s obvious and apparent now that many in the Republican Party never thought this was possible and they really didn’t think it was possible with Donald Trump.  They really were prepared to be embarrassed and humiliated losing the House, losing the Senate, and yet look what happens. 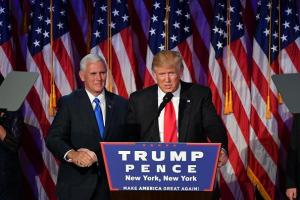 It’s a full repudiation of Obama economics. It’s a full repudiation of our culture and the way the Democrats go about dealing with people.  Hillary did it in her concession speech. By the way, a lot of people are saying it was the best speech Hillary ever has given — and maybe it was, because of the circumstances.  I liked it myself because of the circumstances.  In fact, at one point she reached out, “And to all you little girls,” and I was saying to myself, “Stay away from Carlos Danger!”

But she didn’t say that.  But I wouldn’t have been surprised if she had said that.  But she was still addressing everybody in her group there that… By the way, that was the largest crowd she’s ever drawn in this campaign for her concession speech.  Again, the circumstances.  But rattling off all these groups: LGBT, women, one-armed amputees south of Houston in New York City. Groups. Victims.  The way they see the country is not the way this country is.  This is not a nation of victims!  It is not a nation of people who are discriminated against and denied opportunity. But that’s what they see when they look out and see America.