RUSH: James in Tulsa, it’s great to have you with us. Hello.

CALLER:  Good job, Rush.  I just want to say I’m kind of ticked off at the Republican leadership.  I think it’s time to call our Republicans to the carpet.  When Trump actually said that he wasn’t interested in taking the election results as a final, as a final story, here we are, we’re at the 11th hour, and Trump has a chance to win.  And our Republican leadership is turning their backs, they’re basically saying they don’t even trust the primary results.  He won the primary.  Come on, support our guy.

RUSH:  Okay.  So your basic point is that you’re still ticked off that Republicans will not support Trump.  You’re talking about Never Trumpers even here at the 11th hour.

CALLER:  I think it’s the pot calling the kettle black.  I mean, you know, he has a right, maybe, to not trust the election results.  But, at the same time, you know, the Republicans aren’t supporting him because, you know, he’s the most popular guy.

RUSH:  Okay.  I’m not sure that those two things are the same thing.  Here’s something I could address.  I’ve not heard Trump say he doesn’t trust the election.  What Trump has said — it was in a presidential debate.  They tried to make a big deal out of this.  They wanted him on that night to concede the election.  They wanted him to say, that night, which was two weeks out, or three, whenever the last debate was, that he would abide by the election results.  And he reserved the right to wait and see what happened, which is the only sensible thing to say.

If Trump had said that night on stage in the debate with Mrs. Clinton, that he will accept the outcome, the headlines the next day:  Trump concedes defeat.  Trump concedes election.  It was a setup.  It wasn’t so much a setup.  I’m not accusing Chris Wallace of a setup.  But the question, it was aimed to try to get Trump to say publicly that he thinks the election’s rigged, because he’s been saying it on the trail.  They wanted him to say it in the debate and he didn’t say it in the debate.  So he’s not saying that by fiat or automatically he’s going to challenge the results of the election.

Now, you are saying that the Republicans, by not supporting him, is the same thing, and that’s what I don’t get.  I don’t get the analogy there.  But it could be I’m just too thick today and looking in different directions than you are.  But I don’t even think it’s a factor yet.  We’re not going to know.  It could be the Democrats that challenge — hell, they’re the ones that challenge the election outcomes.  The whole thing.  It was wise that Trump answered the way he did, because I’m telling you if he had said, “Oh, no, I’ll be perfectly fine with the results, of course I will concede if I lose.”  Well, they would have reported, “Donald Trump has just admitted he’s going to lose the election.  He’s agreed he will concede,” is what they wanted to write. 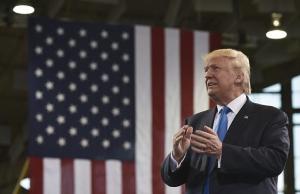