Rush Revere #5 Shoots Up the Charts!

RUSH: I want to thank so many of you.  We announced the release of the fifth Rush Revere Time-Travel Adventures with Exceptional Americans book yesterday.  It’s book No. 5 in a little over three years.  This is Rush Revere and the Presidency, and it just charted up the Amazon sales list, the pre-order list yesterday, all the way up to No. 1 by 7 p.m. last night.  We are so gratified at this.  We really do appreciate it, folks. It’s a real labor of love, this entire Rush Revere Series.

Here we are at the election. We’re four days out, and everybody is thinking about it.  We’re talking about the presidency here, and it’s one of the most important presidential elections in our history.  Living through this so many times is what inspired me to want to write the next Rush Revere book about the presidency, because it gave us an opportunity to write about George Washington, our first president, who had an opportunity to become our first king.

He was so supported, he was so adored, he was so loved that even though we had concocted a constitutional system for a representative republic and we were going to elect our presidents, there was so much support for George Washington that people wanted him to be king, meaning president for the rest of his life.  And it was his morality that preserved the founding.  It really was George Washington’s morality in rejecting the offer of king.

They had just gone to war to defeat the tyranny of the king.  No matter how seductive it might have been to Washington, he rejected it.  He wanted, after it all, to go back to Mount Vernon and live the rest of his life in his home.  It’s true, in a nutshell. After this long, hard fight for independence from the British, never again would tyrannical rule be the order of the day in the United States.  They fought for the freedoms described in the Constitution, the Bill of Rights, and they worked to ensure they would always be protected. 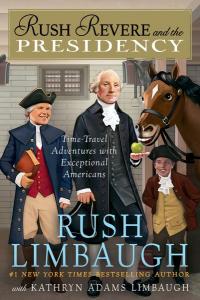 Some form of autocratic rule, be it communism, socialism, dictatorship of one degree or another, the United States is really different, and it inspired other nations to take similar routes toward the freedom and liberty of the individual.  But we are the ones who did it by virtue of charter, and we set the stage.  It was in honor of this that we wrote Rush Revere and the Presidency.  It was up for pre-order yesterday.  Climbed the Amazon charts and the others as well.

And here’s what happens.  I don’t want to give the whole book away, but Liberty, the time-traveling talking horse and a crew of students travel back in time to meet George Washington.  The way we did it, one of the classmates is running for school president, young Cam wants to be school president.  Doesn’t know a thing about it.  And he wants to be president because he wants to be cool.  He wants a lot of attention.  And Rush Revere, the substitute teacher, decides, hey, let’s time travel back and let’s talk to the first president about how he did it and what it means.

Folks, it is so enlightening and so much fun to do this, to actually be able to take history events and write them in such a way that the reader is taken right to the event and is immersed in the event, not just reading about it, but is immersed in it.  But we did something else here.  We spent a lot of time, because we have a lot of young women that are readers of these books.  We spent a lot of time researching the roles of Martha Washington and Dolly Madison and Abigail Adams specifically.  Dolly Madison later but Abigail Adams was with John Adams, and they had a unique love and marriage.  And Martha Washington and George.

You don’t hear much about the women in talking about the early days of the founding, but we looked into it, we researched it. And the First Ladies, the wives of these great men, have prominent roles in this book.  Because we thought it was important that our young female readers — well, all the young readers — understand the important role that the women who were married to these great people played in the founding of the country.

So it’s up for pre-order and it hits, I don’t have the exact date, I think the mid to latter part of this month.  And it’s No. 5.  Great illustrations, not photos.  Well, we’ve got some photos, modern-day era.  But we do have a lot of great illustrations, terrific story that incorporates a young person running for student body president or school president with the first presidency of this country.  The timing couldn’t be more perfect as it’s worked out, and I’m thrilled to announce to you it’s up for pre-order right now.