RUSH: I was reading my little tech blogs today.  Tech blogs are a bunch of Millennials.  They are Millennials and like many, not all, like many Millennials, they’re arrogant and think they know everything. 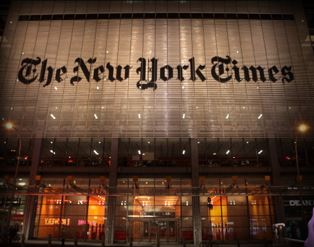 Now, to you and me the New York Times is flawed, biased, not objective.  The New York Times has not written a thing about the FBI investigation of the Clinton Foundation.  In fact, the only outlets you have are Fox News and the Wall Street Journal.  No other Drive-By Media is getting into it.  They’re not touching it.  Not at all in terms of the investigation.  They are writing about how Fox is out of control.  And they’re writing about it as though the FBI is biased against Hillary.  But they’re not covering the substance of the issue.

So there’s a whole bunch of people that are not going to know anything about the fact that the FBI has been investigating the Bill and Hillary Clinton Foundation for over a year and with just cause.  There may well have been criminal activity going on.  May still be going on.  The pay-for-play aspects, selling United States foreign policy.  But there’s half the country that’s not learning about it.  Half the country not hearing about it and they won’t hear about it.  Because the story’s being buried.

RUSH: By the way, I have to tell you. Want to know something else weird, folks?  I got in here today… We have two TV monitors as I’ve explained to you on previous occasions, and they’re DirecTV.  And we have a cable back-up.  So we’re covered if something goes wrong.  We have redundancy.  And today I walked in here and both the monitors are showing me screens that indicate we’ve lost the satellite connection, as though maybe a bill hasn’t been paid or there’s some problem with the downlink or whatever.

“Call Extension 773, Customer Service.”  They don’t give you a number to call.  They just say, “Call Extension 773” or whatever it is.  So I started flipping around here and I found… The monitors are on CNN and Fox.  Top monitor is on CNN.  Bottom monitor is on Fox.  I found out that if I want to watch ESPN or any other channel, I can.  It’s just Fox and CNN that are not being received by my DirecTV receivers.  So I went over there to the Two If By Tea conference room, which is an entirely different network.

How many people know how to do this?

I’ll guarantee you that not two out of ten people are going to know how to go and find the standard-definition channel.  They get their DirecTV out of the box.  They have somebody hook it up or they do.  They go to channel 360 or 202.  They turn it on and it’s there.  Now you get a note saying, “Ah! Ah! Ah! You’ve got to watch in standard definition.” They’ve obviously having a trouble with the HD download.  Only on those two channels.  Maybe it’s more than those.  It could be one of the transponders which features a lot of channels but I didn’t check but those two.  But it’s okay, because we have cable back-up.

Okay.  Ever since I’ve expressed the problems we were having here with DirecTV, not being able to receive the Fox News Channel or CNN, we have been besieged with phone calls from listeners who are telling us that Fox News is unavailable in their neighborhood.  A number of people think that this is a conspiracy based on what they’re saying to Mr. Snerdley, the official program observer and call screener of the program.

Many people think that it’s only in their neighborhoods where there are Trump signs.  It’s not the case, my friends.  I now have the DirecTV outage map that they are publishing.  Would you like to know my take on this map?  It looks like all of Florida except the panhandle has been affected by the DirecTV outage.  In this case it means no Fox News and no CNN.

Also, I just got a note from Cookie who is manning the production team up in New York where our audio sound bites are assembled.  She just lost Fox News and CNN up there on DirecTV.  Now, we’re backed up on cable everywhere.  We’re redundant, because we are a highly broadcast specialty operation.  We don’t leave anything to chance.  So we’re covered.  Even in my home I have redundancies on these kinds of things.  But many people don’t.

Now, again this outage is weird.  I didn’t check every channel obviously, but we’re able to watch. In New York the Fox News Channel No. 360 is just black.  It’s dark.  And CNN with Channel 202 is the Golf Channel.  The Golf Channel is what you get when you tune into 202 in New York.  We get nothing here in Florida.  Channel 360 we get a page telling us to call customer service or to set up our downlink, like the thing’s just out of the box.

When we turn to CNN, we get something.  It’s like the audience channel No. 1 or some such thing.  You’ve got the Golf Channel on CNN in New York.  And the usual accompaniment, we’re working on it.  We’ll get to it as soon as we can.  This is the kind of thing in this day and age, most people do not have a backup, other than maybe pick up something over the air.  But Fox and CNN are cable, they’re not on the air, you can’t pick them up.  So people are going to think they’re being toyed with, that their primary news source is being purposely covered.

RUSH: Oh, the DirecTV outage. I guess I should address this.  It’s now LA.  Some people are reporting to me that only the Fox News Channel is out, that they’re able to watch CNN. That’s…  I haven’t experienced that.  In every place I’ve heard about it or where we have it, both channels are down.  You can watch anything else on DirecTV, but Fox News and CNN are down.  I didn’t check MSNBC. I could, but I’m not going to go to the trouble because I wouldn’t watch it even if I could.  So… (interruption) What? You mean they’re back? (interruption)  Oh, they’re back.

Well, we’ll try to see if we’re back here.  We haven’t checked.  We’ll do that during the break. But I just got a note during the break that they’ve lost Los Angeles. We’ve got a friend in Los Angeles who says that it’s out. We’re checking it down here in the southern command even as we speak.  But I don’t know. (interruption) You think hack? This was a hack? (laughing) You think the Russians! (laughing) The Russians. (laughing) The Russians did it!  It is curious that it’s just CNN and Fox, is it not?

(interruption) What’s your football question?  Tony Romo? (interruption) Right.  They will stick with Dak Prescott of the Dallas Cowboys.  Snerdley is a Cowboy fan and he’s heard that Romo is back practicing.  I don’t think Romo is ready to be activated yet.  But the people that report on Romo say he’s out there. He’s lost a lot of weight.  He’s moving around great, throwing bullets, making it look like he’s ready to come back.  Don’t forget these players have their own PR agencies too. (interruption) Oh, sure! Players hire PR people.

Agents and all that handle that for them.  But I think I saw a story that was quoting Stephen Jones, executive vice president, son of Jerry Jones.  He said something to the effect, “Hey, Tony knows.  Tony Romo, he knows that we’ve got to keep doing what’s best for the team.”  So the Cowboys have their own PR people, too.  There’s no reason to sit Dak Prescott down, not this far into things. I don’t see it happening.  I could be wrong, but I don’t think it’s going to happen.

The Atlantic Pretends There Are People Who Love Hillary Clinton

RUSH:  You want to talk about an alternative universe? You know this magazine, The Atlantic? It’s really a screwball place.  There’s a long profile today in The Atlantic, and you know what the subject is?  “Why America Loves Hillary Clinton.”  America doesn’t love Hillary Clinton.  Hillary Clinton’s disapproval numbers, her negatives are over 50%.  Her polling levels support in many polls is under 50%.  But that doesn’t stop them creating phony PR.

But you made it up.

But you made it up.  You just slimed a bunch of people.

RUSH:  Yeah, this Rolling Stone reporterette, her name was Sabrina Erdely.  Sabrina Rubin Erdely.  When she was challenged with the accuracy over the fact that she made up the story of gang rape at a frat house at UVA.  (imitating Erdely) “Well, maybe, maybe, but it happens, and women need to know it happens and rape culture in America.”  But you made this up.

They also said, “Dan, you know these documents are fake?”